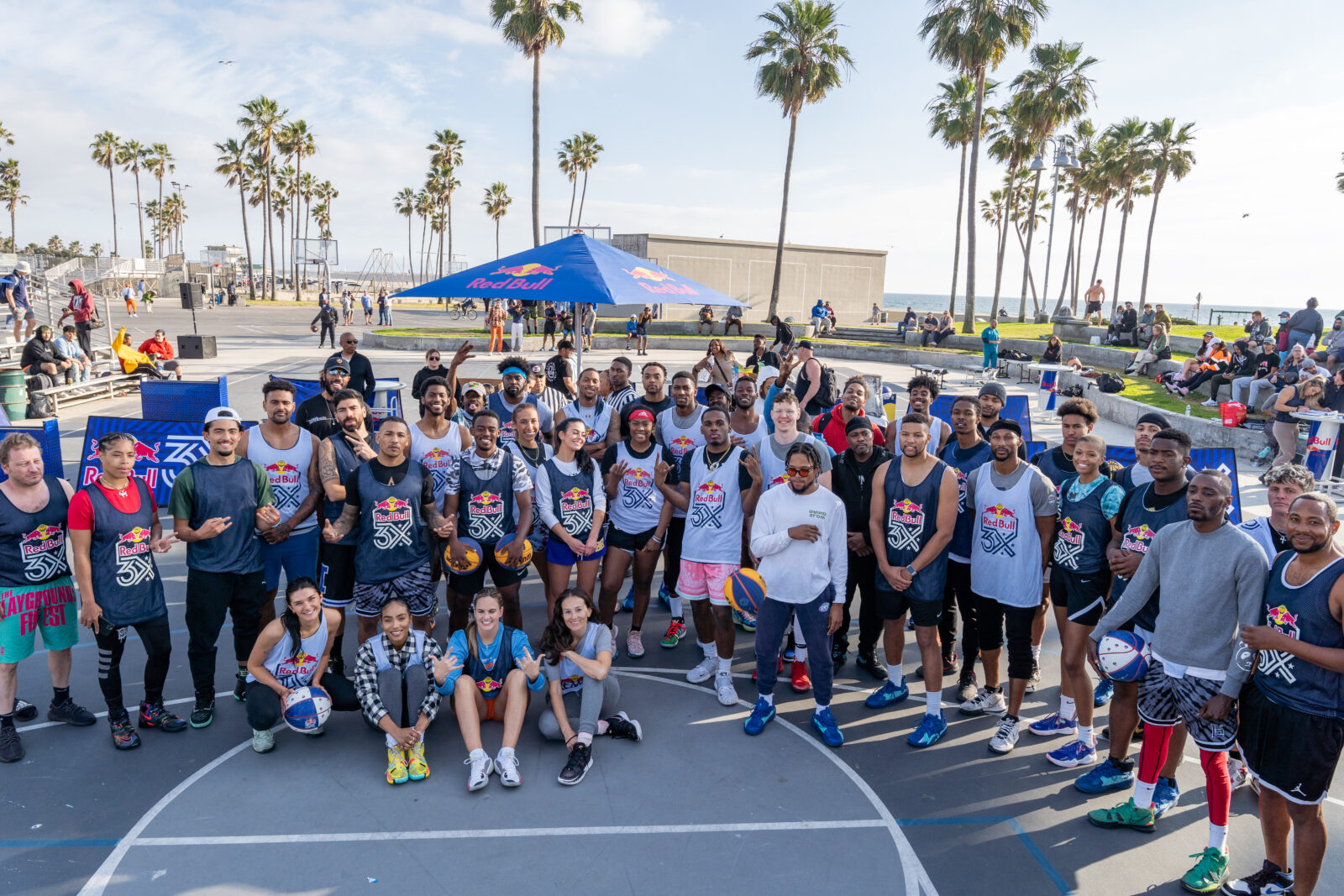 On March 3rd Veniceball, in collaboration with Redbull, hosted a 3×3 tournament at Hooper’s Paradise, uniting a collection of Venice’s brightest talents with prominent basketball influencers who put on a show that didn’t disappoint. We are so grateful for our SoCal basketball community to come out on a Thursday to compete and play the game that they Love.

A special thanks to USA Basketball and Redbull USA for bringing their program for the 3rd annual celebration.

With appearances from the Hezigod, Lauren Fitzmaurice, Chaz Smith, Chris Staples, Jenna Bandy, and Whitney MeiHwa, and pros like Sherman Gay & Sek Henry amongst the accomplished attendees list, the event was a joy to be a part of!

The day started off with a bang as the beach’s sharpest shooters came together to crown a men’s and women’s three point champion. In a format of 25 shots, best of 3 rounds, with $500 on the line, the competition was fierce! Amongst the men, Juice Billsbrew ultimately proved the days best shooter, validating the many claims he’s made to the title over the years, as he set the mens record for the day with a final score of 12 from NBA range.

While the mens competition drew more participants, the shooters truly came out in spades for the women’s competition. The multi-talented sports influencer Jenna Bandy wound up holding the trophy once all the racks had been broken in, setting a beach record of 15 threes! Check out Jenna’s record setting run below. Congratulations to all participants for competing in the Redbull Run The Racks 3 point competition!

As the tournament began, Venice Beach once again proved to be amongst the top attractions for tourists and LA natives alike.

As the officials lobbed the ball into the sky for opening tipoff, the wind began to pick up and the sun, which had beamed over our heads all morning, tucked behind a gloomy swirl of grey clouds. Despite the sup-par weather for Southern California, the energy which radiated from the courts players, Mouthpiece (Veniceball’s MC aptly named “the Voice of Venice Beach) , DJ FM and the stellar EJ the DJ, attracted a classic venetian crowd filled with a diverse group, who stayed and partied until the sun had set and the court was illuminated only by flood lights and phone cameras.

Just as the weather began to change, the 8 teams that qualified from the play-in group set off in their quarter-final matches. Both first-seeded teams handily defeated their fourth ranked match-ups, advancing team Chris Staples & Team AJ Harris to the Semi’s. Though the games were played on court B, the 2 vs 3 seeded matches turned out to be the most electrifying fixtures of the quarterfinals. Team Bobby Champion etched out their space in the next round, as did Team Bryan “Grizzly Moonz” in the most contentious game of the day, narrowly defeating the juggernaut team Hezigod. After 8 minutes of play, Ryan “Hezigod” Carter walked off the court, believing his team had advanced behind his 10 points in one of the most impressive showings of the day. Understandably so, his team was irate when a game clock malfunction brought both teams back on the court for an additional two minutes, where Sek “Viper” Henry would put team Grizzly on his back, hitting a game winning 3 to send team Hezi home. Check out the Vipers clutch sequence below!

By the time the semi-finals began, the sun had completely set, and the court became the sole stage on the otherwise empty boardwalk. In team Staples vs team Grizz , Chris proved to be more than a dunker, draining 4 threes to secure his team a spot in the finals. Meanwhile, Team AJ Harris fell to Team Bobby Champion. The finals were set, Team Bobby (Damian “Gods Prodigy,” Thaniyah & Oliver Amajoyi) vs Team Chris (Van Girard, Jenna Bandy, Austin Fritts).

The finals facilitated a reunion, as former teammates Bobby Champion and Chris Staples, faced off as competitors. In a game that finished 21-16, it was a three-ball delivered with a kiss from Damian “God’s Prodigy,” that delivered the 3×3 Trophy to team Bobby Champion. Check out the winning shot below!

Ultimately, the day was filled with fierce competition, high-quality basketball, and a host of hardworking players, officials, and organizers from Veniceball and Redbull. With future 3×3 events in the works with the Redbull team, keep an eye out for the next Veniceball event, which is sure to be a must-see basketball display at the one and only Hoopers Paradise.