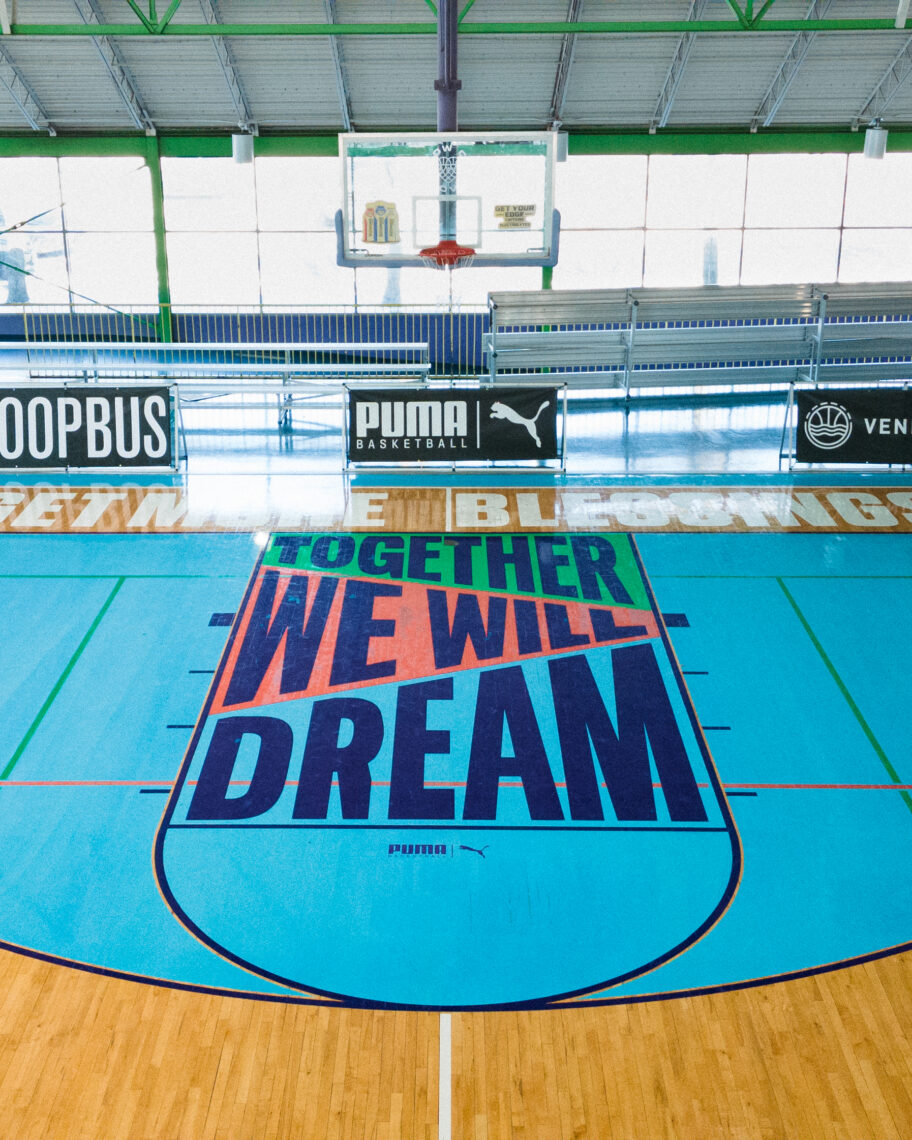 As the layers of fresh wax coating the renovated floors of Zelma George Rec and Merrick House began to break down from the pounding of numerous pairs of shuffling sneakers (Puma’s of course), it became clear to Veniceball that the activation ceremonies for Show CLE Love were a colossal success.

In fact, the entire 10 day escapade, which saw Californians bearing a frigid midwestern journey from Chicago to Cleveland, represented a third successful “Show Your City Love” All-Star Break for Veniceball & the Hoopbus. With the continued goal of elevating the game in every community we touch, during Show CLE Love, we culminated months of preparation by opening two fully renovated community gyms, throwing two star-studded events featuring NBA players, iconic streetballers and a new generation of basketball influencers, all while bringing joy and basketball to local communities along the way.

Braving the elements, the team touched down in the Chi to connect with the Hoopbus Chicago, and set up some survival buckets along the way. During the pandemic, we saw firsthand the effects of removing access to courts, and started the series of Survival Hoops, an effort to bring back basketball by creating baskets out of literally anything capable of transforming into a hoop. In Chicago, the team went the route of fastening a milk crate to a street overpass. Of course, while in town, the team had to drop by Gary, Indiana to connect with the cities rich local hoops culture. Visiting Gary for the third time in the past decade, we were once again blown away by the midwestern hospitality, as new friends put up shots on the Hoopbus and took us on a tour of an abandoned gym.

The highlight of the Chicago leg of the trip had to be when the Hoopbus squad linked up with VBL alum & YouTube sensation, Tristan Jass at the legendary 167 Green St. For your pleasure, check out a clip of Veniceball founder Nico literally shooting the lights out of the Chicago Skyscraper on his birthday, and tune in to TJass’ video of our runs at the facility!

The second leg of the tour focused on giving back to the hospitable and hoops loving communities of Cleveland. Our efforts focused primarily on supporting the completion overhaul of two iconic inner-city community centers, Merrick House & Zelma George Rec. Merrick house serves as far more than a basketball court, providing vocational training for adults, outreach programs for mothers, and hosting pre-k for children, amongst many valuable community outreach services. Prior to the efforts of Project Backboard and ___(anyone else to thank),

Merrick House’s court had been layered with Poly-Urethane and art for over 60 years. After three tireless weeks of work from the Project Backboard team, the newly renovated facility now features a state of the art computer lab, new bleachers, backboards & rims and a shiny mural designed by Dakar Akil which adorns the new floor. Culminating the work at Merrick House, the community came out to see an All-Star run featuring a collection of the games most entertaining dunkers. Check out their handiwork below!

At Zelma George, the Hoopbus partnered with the Terry Rozier Foundation and Puma Hoops to put on a behemoth of an event. Showcasing the art from artist Irwin Hines with the help of Hero Flooring who brought the vision to the hardwood, the event brought out the best of the community. This court is the home of Hornets star Terry Rozier who grew playing everyday throughout his childhood who promised to come back one day to make a difference. Oh and he did, amongst the festivities were:

Terry Rozier and Ja Morant kicked it off with a Slam leaving the community freshly inspired & motivated.

Oh and there was some dunks!.. Anthony Hamilton Jr, Jordan “1FootGod” Southerland, and Talek Williams throw down lobs in the Body Armor Dunk Contest. After, White Chocolate, Chris Staples & Sik Wit It, helped inaugurate the courts first game, collecting some viral clips along the way.

Overall, with two courts down, two successful events and two weeks filled with smiles from our team and the communities we touched from Chicago to Cleveland, we are profoundly grateful to all those who helped make Show CLE Love possible. It is thanks to our sponsors, including Puma, BodyArmor, Mobil 1, Future Mood, NBA Lab, Timeless, New Jersey Sets, Hoop It Up, and as well as the hard work from the Hoopbus staff, the Rec crew Malcolm and his whole staff, the court architects, Erwin Hines, Archie Green, Shelly, Victor, Bill Our, Luis and the Hero Floor squad who made all the stops impactful community events. Much love goes out to the midwest, where we’re constantly reminded of the hospitality and grace from America’s backbone. Until next time, we wish all happiness and plenty more buckets.