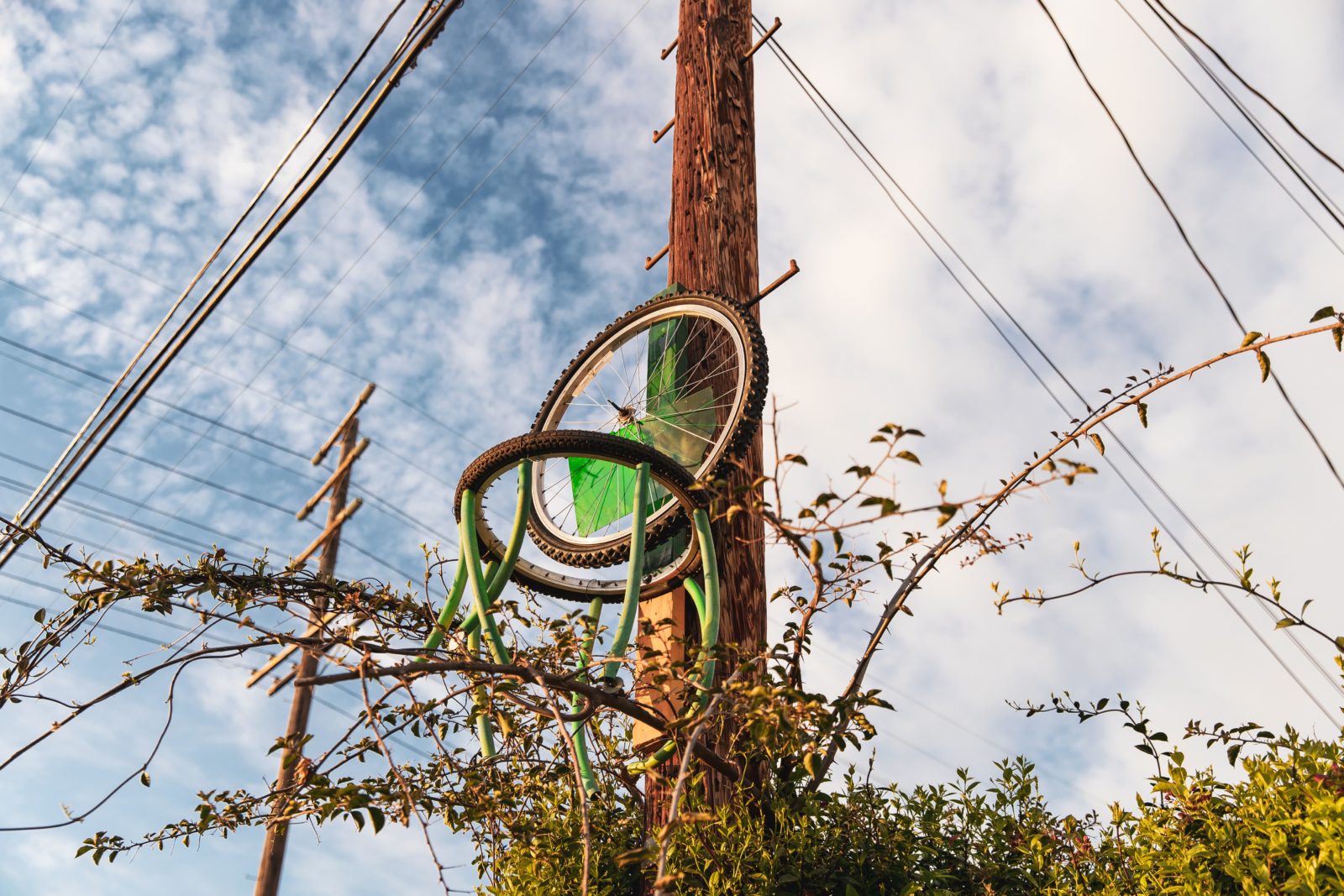 The first hoop went up about a month ago, an old bicycle rim nailed 10 feet high to a telephone pole in a narrow alley in Venice.

The net stretched so tight it looked like a broken dreamcatcher. The backboard was a plywood sheet adorned with a glossy, golden plastic.

As soon as Nico Naismith finished installing the makeshift rim, he shot some hoops. “I need basketball,” he said. “It’s my motivation to get up in the morning. It consumes me all the way up.”

Since Los Angeles County banned playing basketball on its public courts in late March, the 35-year-old Naismith — and that, alas, is his artist’s surname and not his ancestral one — has built scores of these ad hoc basketball hoops along alleyways that stretch from Venice to Mar Vista, some 90 in all. He spends his pandemic days wandering the streets of the Westside looking for discarded items that will form his next improvised basketball rim. ADVERTISING

Before I became aware of Naismith’s efforts, I had not seen a ball hit the bottom of a net in two months. Not since cities all over the world banned basketball at public parks in order to combat the spread of COVID-19.

In some places, the tape wasn’t enough and people kept playing anyway, so city officials clamped rims shut with two-by-fours that look like giant clothespins, tied the nets up in a knot or removed the rims altogether. New York City Department of Parks and Recreation dismantled more than 2,100 hoops on April 6. Los Angeles’ Department of Recreation and Parks boarded up the rims after helicopter footage of Venice Beach showed players disobeying stay-at-home orders and hooping.

Efforts to effect any sense of normalcy are taking place at the highest levels of sport. A couple weekends ago, the Bundesliga, the German soccer league, returned to empty stadiums filled with piped-in fan noise. South Korea’s soccer league had life-size sex dolls with the printed-out faces of fans to fill seats (the league soon removed the offending ersatz fans and publicly apologized). You can expect similar innovations if and when the NBA, NHL and MLB return this summer.

Contact sports will carry with them high risks that, at the pro level, presumably will be blunted by constant testing. But grassroots sports, such as pickup basketball, are more precarious. Pickup ball is free to all, and there is no way to screen who comes on the court.

There are hopes that youth basketball and other youth sports leagues will resume this fall, but the parks and recreation departments of New York City and Los Angeles, homes to the most famous public basketball courts in the world — Venice, Rucker and Dyckman Parks, among others — have no plans to allow people to play again.

If you don’t hoop, you might not understand the hunger to get back out there. But 450 million people worldwide play basketball, according to FIBA, the International Basketball Federation. That’s whole nations of basketball-starved masses. Naismith hopes his hoops will tide people over for the time being. He has plans to put up 100 of these pieces of functional art.

“I want to it to be like a mini-golf course where people play their way through the neighborhood,” he told me.

1/13One of the baskets that Nico Naismith has assembled and placed around the West Side includes a return chute.  (Courtesy of Chris Costello)

2/13A basket built and hung by Nico Naismith is utilized on the West Side of L.A.  (Courtesy of Chris Costello)

4/13Nico Naismith hangs one of his homemade hoops somewhere in the West Side.  (Courtesy of Chris Costello)

5/13One of the baskets that Nico Naismith has assembled and placed around the West Side comes with a message.  (Courtesy of Chris Costello)

6/13One of the baskets that Nico Naismith has assembled and placed around the West Side includes a Mario Bros. character.  (Courtesy of Chris Costello)

7/13Lori Powers uses a satellite dish to build one of the baskets to be placed around the West Side.  (Courtesy of Chris Costello)

8/13One of Nico Naismith’s works of basketball arts pays homage to the game.  (Courtesy of Chris Costello)

13/13There is plenty of margin for error with this bicycle rim as a hoop and reflective backboard, another creation of Nico Naismith.  (Courtesy of Chris Costello)

To realize his vision, Naismith approached local Venice “junk artist” and fellow hoops addict Lori Powers, a tan, young-looking 64-year-old to whom Naismith affectionately refers as “Westside Grandma.” According to Naismith, this project is as much his as it is hers. He hauls his trash “treasure” to Powers’ backyard and she uses her crafting skills to create safe, working and imaginative basketball hoops.

“I miss my teammates, fake passes and eye contact,” said Powers, who in normal times plays four nights a week and travels the country with the Connecticut Classics II, a team of longtime friends who won the National Senior Games championship last year. “But most of all I miss the dance of basketball. When you move just right, it’s a high, it’s a rush.”

Naismith and Powers give careful thought to where they erect a hoop and make an effort to keep the neighborhood aesthetic in mind. “Like if they have a funky backyard or a modern minimalist look, I want to respect the architecture,” he said.

I asked him about the beige cat scratch post he just put up. “That was simple,” he said. “I put it in front of the house where I found it so that the cat can see his old toy from outside the window.”

I’d describe his sensibility as optimistically post-apocalyptic. I’d like to believe that this is what basketball will look like after the end of the world as we know it.

He posts his efforts on his popular Instagram account, @veniceball, with the hashtag #survivalhoops. “Nothing feels better when somebody builds their own hoop out of trash and sends me a photo,” he said. He’s received hundreds of photos that he shares on his account.

The project has brought Naismith back to his childhood growing up in France. Basketball wasn’t so popular then, so he shot hoops with a soccer ball at a schoolyard.

“The first hoop I put up was with my mother outside our home in the gravel,” he said. “I used to turn everything into a basketball hoop — shooting dirty socks in the laundry, tossing groceries in the cart. This whole situation is bringing me back to that state of mind. Back to the purity of the game. I’m seeing the potential for basketball in everything.”

I am among the inspired. I grew up shooting on a milk crate nailed to a cabbage palm tree in South Florida. Since hearing about Naismith, I decided to add to his “survival hoops” project and build my own.

I found a cheap, copper-imitation pail, cut out the bottom and fastened it to the palm tree outside my South Florida apartment. And then I shot. I was rusty, but the shots that went in felt good.

It’s odd to miss a silly game so much in the midst of a broken world. But the act of shooting anchors me to reality.

When even the most obvious truths are put in doubt by the darkest corners of the internet, I don’t know what to believe anymore. Basketball is simple: The ball goes in or it doesn’t. And that’s on me.

I asked Naismith why shooting feels so good.

“It’s pure therapy, brother,” he said. “I feel present; I’m not thinking of anything else. It’s almost like breathing, like meditation. That sound. Swish. Cha-ching. There’s no other feeling like it in the world.”