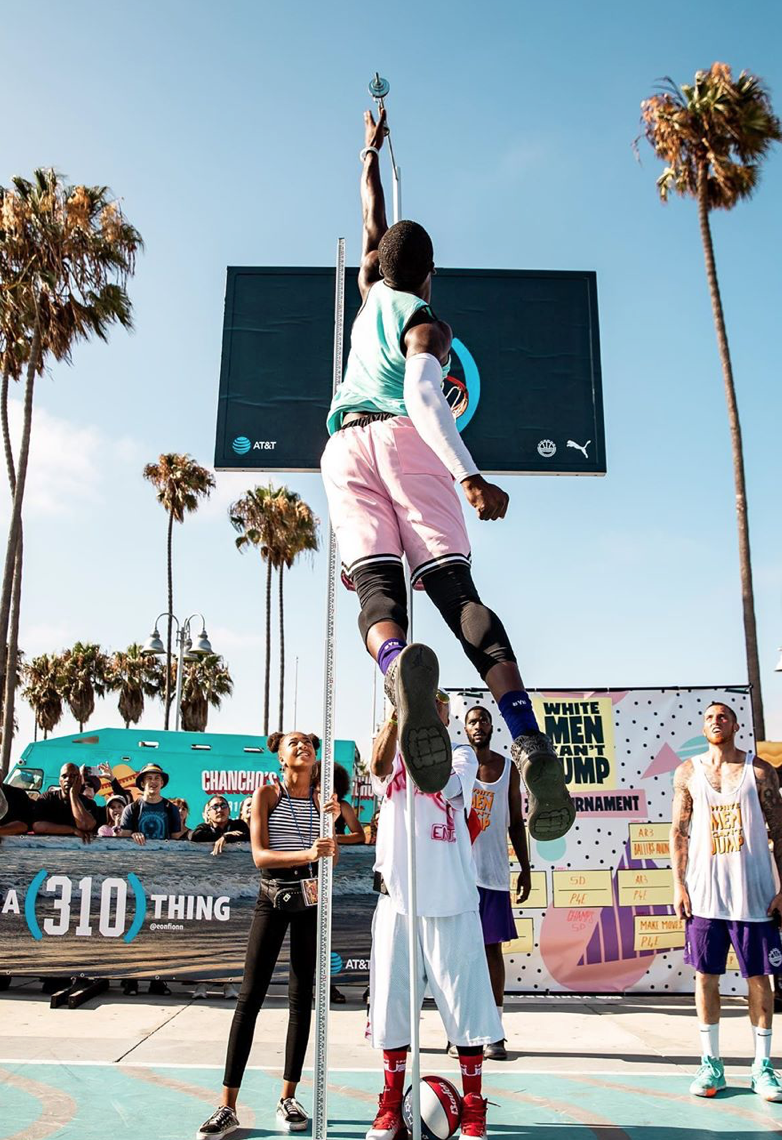 To honor the late and great Venice Basketball legend Ron Beals, the VBL teamed up with ATT as part of the “Rep Your Area Code” campaign as well as Wilson Basketball for the White Men Can’t Jump 2v2 Tournament to make the end of the season an absolute spectacle.

Thousands of spectators gathered around the sidelines and flooded the merch stand for their one of a kind VBL gear and the new Evo Edition White Men Can’t Jump Wilson Basketball. Dj Punch blessed the crowd with tunes and the legendary mastery of ceremony Mouthpiece kept them laughing.

The future of the VBL, the kids VBL took the court. They received hands on training and were led in drills by the former Slam Dunk champion and Los Angeles Laker Cedric Ceballos . After their workout the kids took place in a live scrimmage.

Before the OG’s of Venice turned back the hands of time in the “Battle of the OG’s,” they gathered around in a circle to remember their brother Ron Beals. They each went on to share stories about the basketball pioneer. Rasheed Smith’s story stood out to me because he stated “I grew up in the era of Michael Jordan, but I didn’t want to be like Mike. I wanted to be like Ron.” He went on to talk about how his father used to drop him and his brother off at Ron’s house on Saturday mornings for them to go take the courts of Venice. After the stories, the OG’s went to battle.

Next – sporting their White Men Can’t Jump tank tops, the players took the court. The teams were split into the The Sidney Dean and the Billy Hoyer divisions in honor of the White Men Can’t Jump stars. Each team received two games to 15 points in pool play. Then the top teams advanced to the quarterfinals, followed by the semifinals, and then of course the finale. Team Sneakersnstuff took home 7ft tall trophy, got to meet NBA trainer C. Brickley, and earned a care package from the VBL and Wilson.

Directly after the tournament, things heated up a bit as Hautkini took the court for their Bikini Fashion Show. Girls strutted across the court showing off the high-class swimwear and a Venice or Wilson basketball.

The celebrity game was highlighted by celebrities like internet sensation Famous Los,  Dunking icon Reemix, White Iverson and many more. Famous Los balled out and took home the MVP honors. He scored and assisted on many points but more importantly kept the crowd entertained.

The high-flyers stole the show as they shut down the boardwalk with the “To the Top Contest”. The leapers had to jump into the air and attempt to touch a bell that was 10 plus feet in the air and players would be eliminated as the bell got raised higher each time. Dunk extraordinaire Elijah Bonds came in second touching the bell at an astonishing 12 feet and 5 inches. Clemson University track and field high jumper Anthony Hamilton took home the crown ringing the bell at a mind blowing 12 feet and 6 inches in the air. Both of them displayed over 50 inches of bounce.

The last event before the VBL finals was the Jam Session. World renowned dunkers like 36 year-old Reemix and up and coming dunkers like Elijah Bonds and Jamal Harris threw down sensational dunks in front of the audience. Reemix showcased his incredible abilities as he flew through the air for a 360.

Now –  finally after all the festivities, it was time for the main event. The longest running team in the history of the VBL, Sunblock on Wheels, attempted to get their first VBL Championship against Project Dream/Los Fearless.

Los Fearless won their second VBL Championship in three seasons by defeating Sunblock 59-57. They now hold the titles for 2017 and 2019.

In what many predicted to be a close match, turned out to be just that. Both squads fought hard and left it all on the court. AJ “Chosen One” Harris simply had his way with the Los Fearless defense. He either scored or had an assistant on every basket. Vince “Body Snatcher” Camper presented a matchup nightmare for  Sunblock. He checked into the game stating he was about to go off and did just that. Los Fearless led 29-27at halftime.

In the second half, neither team gave up an inch. The game remained close until the last seconds of action. The game was ultimately decided by free throws in the last minute of play. Finals MVP Vince Camper knocked down 4 critical free throws. One set to give Los fearless a 1-point lead and the other set to put his team up 3 points. 5-time champion and 4-time MVP Brandon “The Mute” Fields had an opportunity to tie the game at the free throw line with 3 shots, but missed the second shot. This forced him to try and miss the third shot on purpose to get a rebound and tie the game up. Vince “Body Snatcher” Camper was named Finals MVP with 20 points, 6 rebounds and 3 assist.

From the VBL team, we want to thank everyone for their efforts in making this season something special. This family is only growing stronger every summer and we hope you all stay in contact and follow along throughout the year on Instagram @veniceball