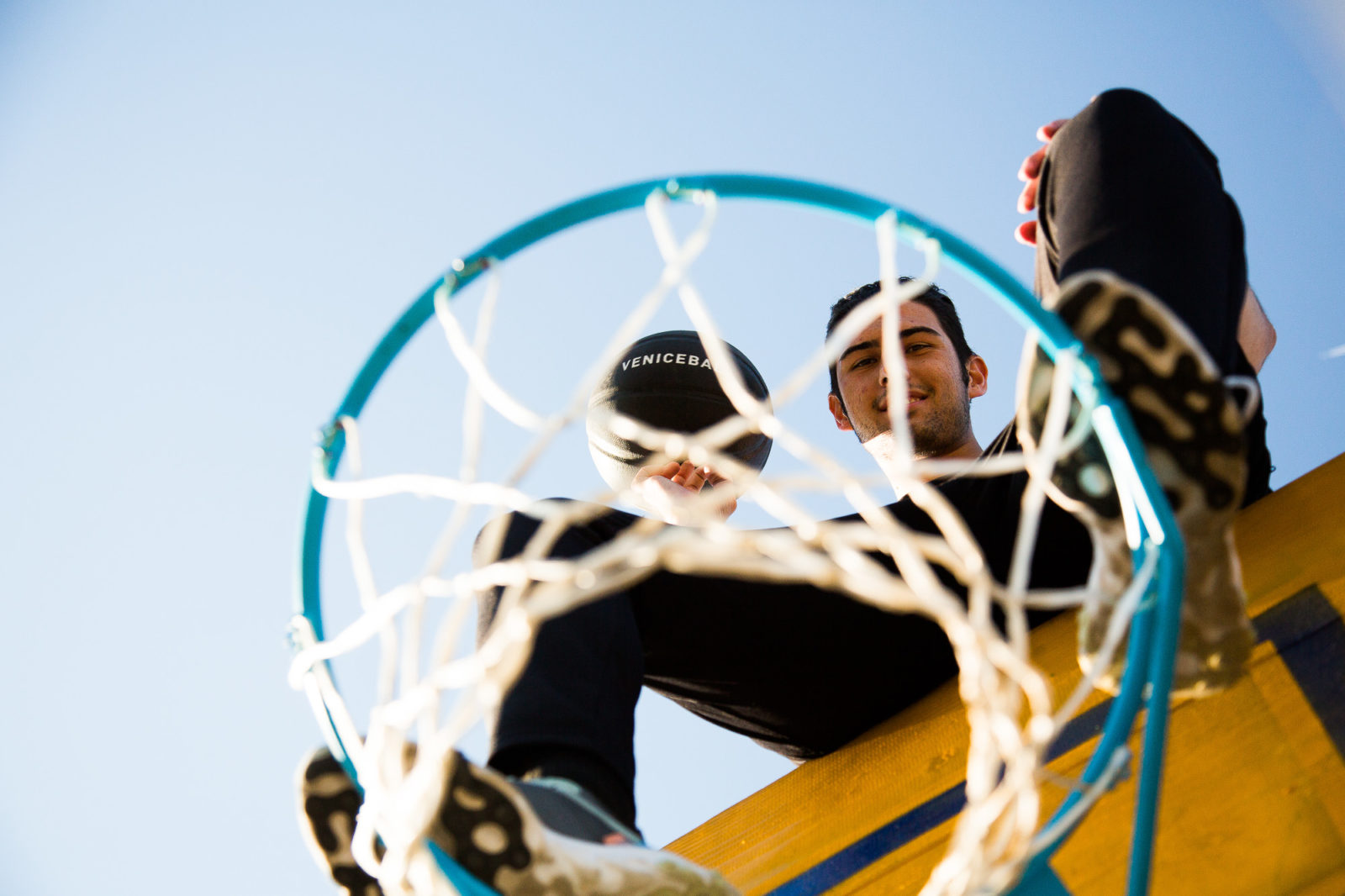 Imagine the Magic School Bus but for basketball. This vehicle has the power to bring together people of all different backgrounds with the goal of spreading love through the game. This past Sunday, January 12th, kicked off the incredible project that is the Hoop Bus. The day consisted of service, friendship, and, of course, hoopin’.

This inauguration began in Venice Beach in the parking lot that inspired us all – the Rose Parking lot where White Men Can’t Jump was filmed. We were lucky enough to be blessed with the presence of AnnaLynne McCord and her meditation practice on the beach. This mindful demonstration evoked a positive energy for the rest of the day.

After some photos with the bus and a donut pig-out, the Hoop Bus got rolling. Our first stop was The Towers, also known as Ocean View Park in Santa Monica. We piled off the bus and got some buckets. Not only did the bus get rolling, but so did the boys from Paralympic Experience. The combination of the beautiful beach view and the different types of hoopers made this a perfect first stop.

The trip continued on to The Cage at Oakwood Rec where former Harlem Globetrotters, Chris Staples and Bionic Brooks, met us to put on a show. This was not your average game of pick up at the park unless your local games consists of alley-oops and posters. No boy or girl was safe from getting dunked on, but that’s all part of the Hoop Bus experience.

As all things Veniceball do, there was an aspect of community service to this mission, which led us to the Imperial Courts Housing Projects at the Watts Empowerment Center. This led to a beautiful afternoon with children playing basketball and grubbing on some BBQ cooked by our trusty bus driver Brandon Reese, who, in fact, is a Syracuse Basketball Alum. The man has sneaky bounce.

The trip stayed in South Central for two more stops: the Watts Oasis and the Nipsey Hussle Memorial Court at Crete Academy. The Watts Oasis is an iconic court in the sense that there are mosaic details throughout the whole design. This unique method highlights the thought and care that goes into the creation of each court. Similarly, at the next stop, the Nipsey Hussle Memorial Court is a work of art in itself that highlights the life of the highly influential artist. At Crete Academy, those on the Hoop Bus challenge XvsX, a team organized by famous NBA legend Metta World Peace. This competition led to multiple bodies being caught, resulting in a mandatory 2 minute sit down. This stop captured the friendship and community that the Hoop Bus envelopes.

It only made sense that the bus would make its final stop of the day at everyone’s favorite court: Hooper’s Paradise. The Venice Beach Courts at sunset is one of the most beautiful sights and should be on every baller’s bucket list. We got some great runs in on the court and off the court, the visitors were in awe of the Hoop Bus. When it got too dark to see, we ventured down Venice Blvd to Heaven’s Gate to get some games under the lights. We were blessed with an appearance by actor Greg Cipes who played original songs during the runs. To be frank, this whole day felt like a trip to Heaven as the long awaited Hoop Bus has been brought to fruition.

We want to thank all the people who made this day possible: the donors, the attendees, and the strangers turned friends through this process. The beauty is that we are just getting started and all are welcome to #JUMPONIT. Looking forward to the future of this beautiful journey.