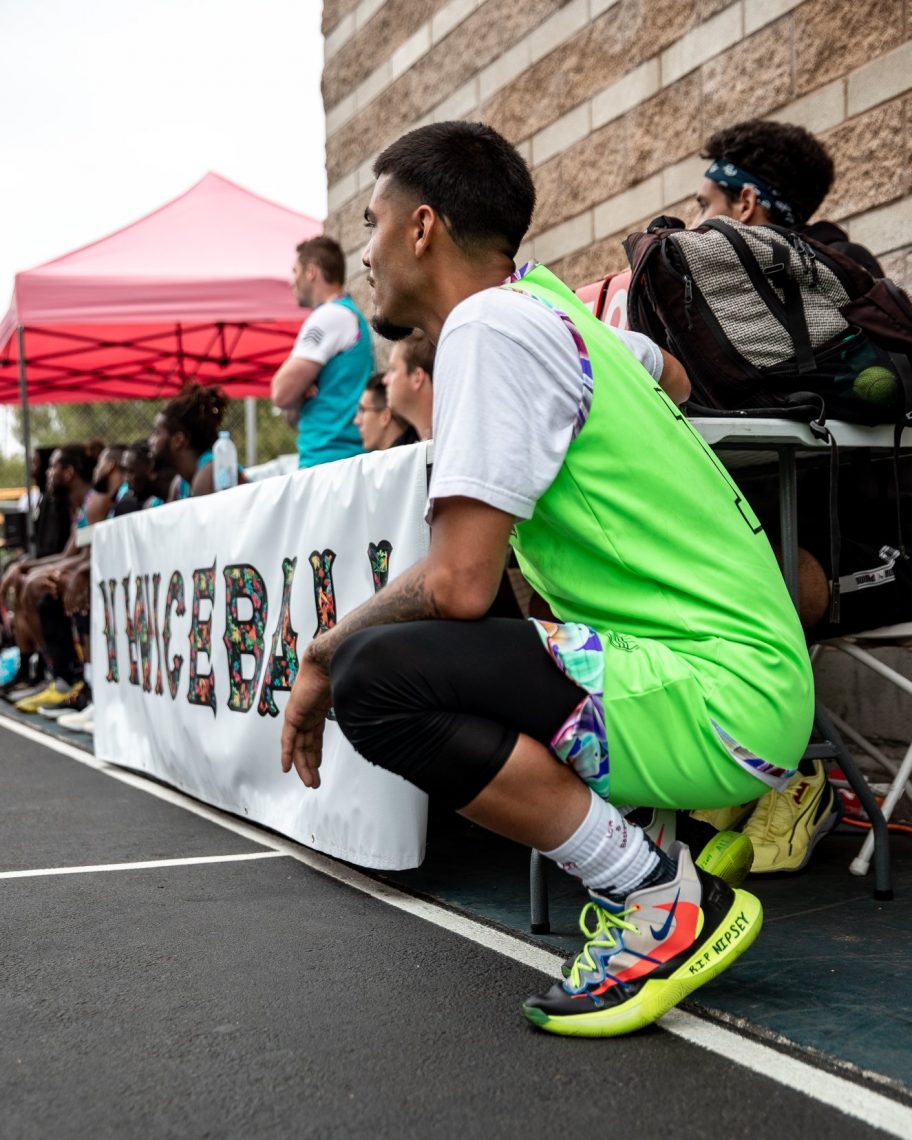 The Venice Basketball League kept the show on the road for the second week in a row. This time with games played at Oakwood Recreational Park here in Venice. The cage surrounding the blacktop, similar to the likes of Rucker Park in New York City, served as the battlegrounds for some of the VBL’s best games of the season thus far.

There’s no better way to celebrate Father’s Day than with music from DJ Punch, vegan entrees from Jackfruit Café, free haircuts from Haircuts4heroes, and perfect weather.  The fathers playing and spectating all agreed.

In a hard-fought game between two of the VBL’s heavyweights, regulation time was not enough as it took until the end of overtime to decide a winner.  Sunblock escaped with the 64-60 victory over Project Backboard to not only go 3-0 and remain undefeated but also hand Project Backboard their first loss of the season.

Sunblock was led by their veteran players: “The Chosen One” recorded 19 points, 7 rebounds, and 6 assists and “The Mute” dropped 18 points with 4 steals reminding the league why he is a 4-time League MVP and 5-time Champion.

The first half consisted of both teams trading buckets. “The Chosen One” orchestrated the offense for Sunblock, and Nico for Project Backboard got off to a tremendous start. He scored 20 of his 26 in the first 20 minutes of the game helping PB take a 38-31 lead into halftime.

The battle intensified in the second half with both teams showing why they deserve to remain undefeated. “The Mute” displayed why he is still one of the VBL’s most elite talent by heating up with two 3-point field goals. To add on to that, The Mute turned back the hands of time with a one-handed slam that sent the opposing big man to the bench in the closing minutes.

At the end of regulation, the score was all knotted up 55-55 leading to the first overtime game of the season. With both teams evenly matched, the game ultimately came down to a matter of defensive stops and free throws. Free throws?

That’s right… free throws! If you’re familiar with the VBL, then you should know that players do not shoot free throws; however, there is a sole exception for overtime play. With that being said, Sunblock made their free throws and clinched the win. AJ “The Chosen One” Harris was named the Player of the Game for the second time in the early season.

Bristol Studios earned their first victory in a close match against Born X Raised 64-59 where both teams appeared perfectly matched up throughout.

In the first half, there was no shortage of tempo as both teams raced the ball up and down the court. Sammie Archer did just that while securing Player of the Game accolades with 18 points and 9 boards. This helped his team take a 35-32 lead into halftime over Born X Raised.

Emmanuel Brown had another impressive showing for the Beachboys as he finished with 19 points, 6 rebounds and threw down a monster dunk in the second half. But that wasn’t enough to stop Archer who hit the game sealing shot. Rookie Brian Mayfield put together another nice game for Bristol Studios, this time showing a more complete game – Mayfield tallied 15 points, 6 rebounds and 4 assists.

Both squads now sit at 1-2 and look to even their records next week.

While both teams came off disappointing losses the weekend prior, Shadow Hill and Future Mood looked to bounce back in the third game. Despite their efforts, Future Mood fell short to Shadow Hill: 80-79.

Shadow Hill led by Player of the Game “Norf Kakalaki” dropped another McTwenty piece but the big fella Julien Ducree was the true head-turner this week. In his VBL debut, the Dixie State hooper recorded 12 points and 10 rebounds

Future Mood’s 6’10” big man Andre Smith responded with 18 points and 7 rebounds along with Sandro’s 20 points. This allowed them to cut their deficit to only 1 point with just seconds to go, but, due to a failed in-bound play, that was as close as they would get.

Playing 4 Eternity (P4E) headed into Game 4 with sights set to join Sunblock as the only undefeated teams left in the league and did just that with a 76-71 win over Los Fearless.

P4E, led by Ryan Nitz’s 15 points in the first half, appeared unstoppable. Marcus “The Coroner” Bell and “Motherland” of Los Fearless flipped the trajectory of the game with just about every rebound of the exhibition. Those second chance attempts shortened their deficit to 39-33 at halftime.

While the second half remained close with huge contributions on both ends, P4E proved to be too much for Los Fearless. P4E’s Mark Anthony totaled 19 points and Drewskii had 16 points. Los Fearless’ CJ Johnson came alive with 18 second half points.

The spectators of Dompen vs Ballers Anonymous witnessed greatness as both teams were clearly eager for their first win of the season. Last summer’s champions, Dompen, earned this 56-41 victory.

Both teams are spotlighted by superstars: Dompen’s “White Iverson” and Ballers Anonymous’ Chris Staples, famous for receiving the title of “World’s Best Dunker.” The Player of the Game, however, was big man Shakir Johnson who disrespected incoming traffic with 12 blocks.

In the first half, both teams came out aggressive, looking to leave their mark on the game. Chris Staples had a ferocious one-handed slam that electrified the crowd, but Ballers Anonymous was limited to just 23 points at halftime with a score of 27-23.

The phenomenal defense of Dompen did not slow down in the second half where Shakir Johnson recorded 7 of his 12 blocked shots. This nearly tied his VBL game-record of 14 blocks. Ballers Anonymous’ scoring struggles lingered around in the second half leading to a 56-41 ball game.

Dompen’s record now stands at 1-1 heading into next week while Ballers Anonymous is now 0-3 with another chance to get their first victory next Sunday.

With Week 3 of the VBL wrapped up, the players, coaches, and fans are surely more amped than ever to get back to Hooper’s Paradise. Four out of five games were decided by 5 points or less and even an overtime win. The kinks have been worked out and the VBL is playing at the top level it has ever seen.

Week 4 is going to be a movie with games at Venice Beach Saturday AND Sunday (National Go Hoop Day). Each week of the VBL calls for something new so which 5 players will be Week 4’s Players of the Game?

With the schedule TBD, stay tuned to the @veniceball Instagram account for game times and updates regarding Saturday and Sunday.

For more pictures from the event, check out the VBL Facebook page.