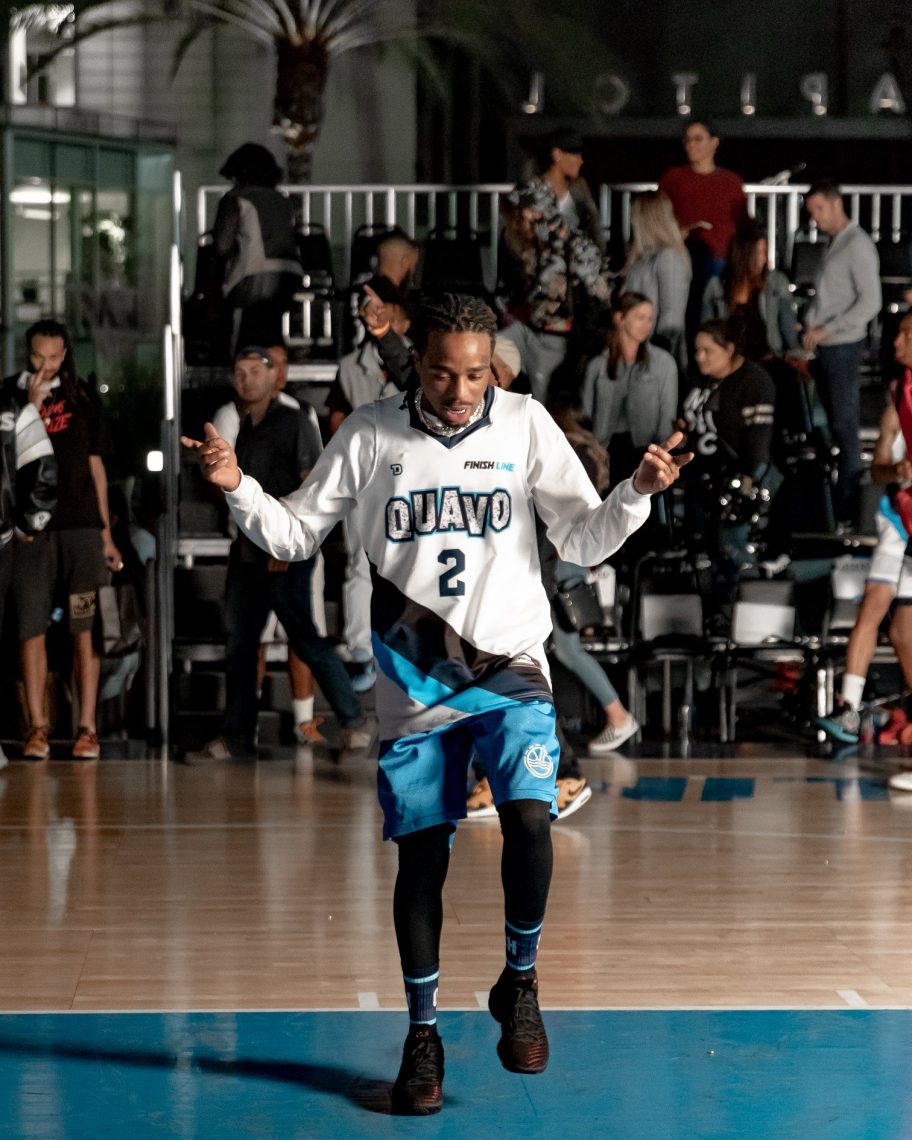 Some cliches are cliches for a reason. The first example that springs to mind: All ballplayers want to be rappers, while all rappers wanted to play ball. There’s a lot of evidence to support this theory, from Kendrick Lamar’s verses on “Black Boy Fly” to Damian Lillard’s two independently-produced rap projects featuring no less of a hip-hop luminary than Lil Wayne himself. But in 2018, patient zero for the “rappers who love to hoop” epidemic has to be Quavo.

From giving his old high school’s basketball team a full run of new hoop shoesto participating in a number of celebrity games — including taking MVP honorsin the NBA’s own All-Star weekend celebrity matchup — Quavo’s attachment to the sport has been well-documented.

However, he managed to take it even further for the video shoot for his upcoming Quavo Huncho single, “How Bout That?” transforming the Capitol Records parking lot in Hollywood into a full-blown Huncho Hoops basketball tournament, complete with celebrity appearances, a dunk contest, and his own mascot, Huncho, with the help of California’s Venice Basketball League.

During the event, Quavo and fellow Migo Offset roamed the set, practicing layups and directing the controlled chaos as some of the VBL’s premier players warmed up and played a series of round-robin games to short point totals like seven and eleven. The players ranged widely in size, age, ethnicity, and sex, from a pocket-sized fourteen-year-old with the handles of a superstar point guard to towering 7-foot-3 former NBA players and female former Harlem Globetrotters. Huncho, the cartoonish mascot, hyped the crowd from the stands, dancing and cutting up alongside Instagram stars Dan Rue and NickNPattiWhack (of “what is you doin’, baby?” fame) as spectators like Motown Record bigwigs and PR-related family and friends cheered on their favorite players from the bleachers.

While Quavo was the centerpiece and driving force of the day’s events, the VBL provided the entertainment, bringing the league’s summer Sunday good times to the Capitol lot. Founded in 2006 by French streetballer Nick Ansom, the beachside league has grown in popularity along with the other organizations as summertime hoops gained prominence in the wake of the 2011 NBA players’ lockout. While other pro-am leagues cropped up all over the country, with some like the Drew League becoming huge, Nike-sponsored enterprises, the VBL has remained independent and true to the original spirit of its inspiration, the 1993 Wesley Snipes and Woody Harrelson buddy comedy, White Men Can’t Jump, as well as the courts that film made iconic.

Since its inception, the VBL has become one of the premier summer leagues, with a growing social media following and regularly touring exhibition games. The league has spun off a Kids Venice Basketball League with youth clinics teaching basketball and leadership skills and the Build Courts Not Walls initiative, which renovates courts not just locally or even nationwide, but globally, all funded by the proceeds from merchandise sales.

Ansom has proven to be a masterful promoter, pushing awareness of the league through its touring events, powered by burgeoning social media stars like high-flying dunkers Chris Staples, Michael Purdie, and Guy Dupuy, and social media hoop stars like Brandon Armstrong, aka Bdot, and Carlos “FamousLos” Sanford. It’s even one of the few leagues to incorporate intergender play with female professionals Deja Mattox and Tammy Brawner.

However, despite VBL and its stars’ growing online popularity, it still takes a tremendous hoops head to have the awareness that Quavo does in picking them for his video, which will incorporate the various elements mentioned here — live hoops, a marching band, cheerleaders, and a mascot — to truly display his heart for the game. Basketball has always figured heavily into many rap videos and hip-hop stars have buzzed around courts and the athletes who dominate them for almost as long as the genre has existed — just look at Drake’s recent interview with LeBron James or the latter’s appearance at the former’s recent Staples Center appearance. But Quavo has taken that relationship to another level with his Huncho Hoops event. As players and rappers continue to look to each other for inspiration, those bonds will only get tighter and one thing is for sure: Quavo will continue to be one of the leaders at the forefront of the hip-hop-hoop connection.

Quavo Huncho is out now via Quality Control Records/Columbia Records. Get it here. Check out more clips and photos from Huncho Hoops below.