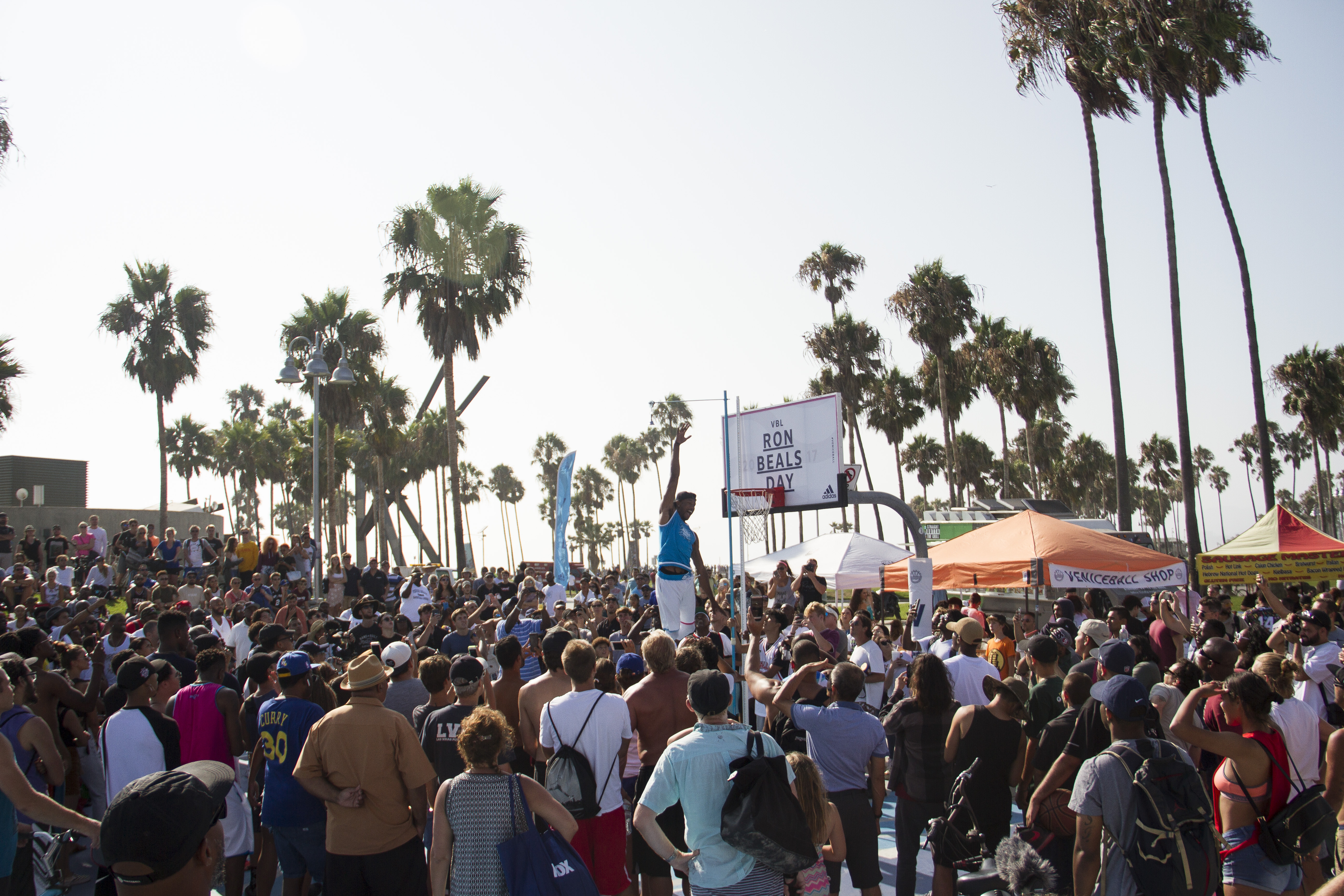 Here are some of the highlights for 2017!

We had a blast setting off the year as we dominated the competition at the HUB Money Invitational. The VBL All Stars won 7-0 against some fierce competition!

Then, the community came alive in April as the Venice Basketball League (“VBL”) hosted an event called Clipper Nation, which celebrated the Clippers 4-seed in the 2017 NBA Playoffs. It was a beautiful day as the sun shined bright and the crowd was pumped up at Venice Beach.

Everyone comes out to join us for our big fundraiser celebrations, including our own VBL All Stars, Chris Staples, Michael Purdie, and Kwame Alexander. We also had many present from Los Angeles Lakers, including Metta World Peace, Julius Randle and Jordan Clarkson supporting our Hoops for Hope event raising money for children in medical crisis. It’s hosted every May! The Lakers could not stop partaking in the fun watching the dunk contest, so much so that they later decided to join in the festivities and the day went viral with two minutes left in the game. Clarkson decided to bring back some of his streetball flavor and dropped his defender with this killer crossover! What a day!

Per usual, the catalysis to the season was our annual Open Run, which is held every year to scout new talent and bring the best young hoopers from around the world and los angeles area into the VBL on May 21st. It was a long day for our 100-strong hopefuls – the largest yet for a VBL Open Run! As it began under the blazing noon sun Keion Kindred, it led these young men through the tough testing with endurance, explosiveness, and 1 on 1 drills.

Of course we couldn’t leave out gameday, as Sunday, June 4th marked our first game of the new year. This day is a special occasion for every longtime fan of the league, as this what we’ve all been waiting for. The day kicked off at 9am, with the Kids Venice Basketball League (“KVBL”) camp otherwise known as Church of Hoops, our non-profit initiative focused on engaging LA’s youth in physical activity, healthy eating, and community involvement. For this specific week, the emphasis was “The Art of Shooting.” We had several “coaches” come to help with the camp including Paul Davis, Chris Staples, Josh Gouch, and basketball legend Sik Wit It. The day was bliss, as basketball love was taken, and given in a full circle.

This year, VBL’s campaign “Build Courts Not Walls” took off as we revitalized the famous Venice Beach’s outdoor courts with a major celebration. It was kicked off with a ribbon-cutting ceremony to inaugurate the newly resurfaced court, one that we hold very special in our hearts. It was a moment for us to share our love with the community and also be recognized for this place being our “home”.  In tandem with The City of Los Angeles, The Los Angeles Dept. of Parks and Rec, Adidas,  and our amazing community of donors, VeniceBall conducted a full resurfacing and repainting of what is now called, The VBL Court. The purpose of this effort was to give a lasting gift to the community that has supported VeniceBall’s events through the years. Without them, none of this would have be possible. Everyone was connected that day as it was a mix of VBL hoopers from all ages, along with friends, fans, and family who have been a part of our incredible 11-year journey. They attended the ceremony of the court alongside the celebration of the where it began, with the 126 year anniversary of this beautiful sport, basketball.

There was not a day filled with more league highlights than our championship game culminating on Ron Beals Day with a performance from Dove Shack. It also marked the first night game in all of VBL history. After the exciting drama filled finale, Los Fearless took home the VBL Championship. The season ended with a screening of “White Men Can’t Jump” on the main court under the summer stars. Until next season!

In August, we took the VBL All Star Team to China to compete in the Jump 10 International Streetball Tournament. It was a high stakes money game for $100,000, with teams represented from countries all around the world. The VBL team was the ONLY team not representation a nation but, instead a movement. Dressed in the “Venice vs The World” hoodies, (available in the VBL Store), our team ran the courts and became known as the World Champions!!!!

With the end of our summer bragging rights on the line, we knew we had to earn our respect again. Thirteen teams entered the field over a entire weekend for the annual 2017 VBL World Games held at the Hooper’s Paradise on the second week of September. After last years 3×3 format, the tournament returned to 5×5 full court Venice Beach style streetball tournament with a double elimination bracket and games to 21. Kurtis Blow blessed the beach with a classic show that had the whole crowd on their feet and dancing together on the court. Hub Select team in the final game made sure it did not end well for the Free Agents who gave it their best with strong efforts from VBL’s CEO Nick Ansom and player, Jojo. The strong chemistry of Hub Select and dependable force inside the key known as, MVP Leon ‘Colossus’ Gibson led them to another World Games title. The Hub Select team took home the win.

Fall forward! On Thanksgiving Day we took the morning in gratitude and hosted an open run and a clothing drive in conjunction with LosAngels.Org to give back the great energy that we received this season at the beach. As many know, the homeless community is a real part of the community in Venice Beach, and we take care of our own. The Courts were filled with people sharing clothes, encouraging words, hugs, and hot meals for those in need of the family vibrations this holiday season. It was a true blessing to be apart of this event and a tremendous way to kickoff the holiday season as a community and a team.

In partnership with the Los Angeles Police Department December 3rd, we hosted our annual “Santa Slam” Holiday Toy Drive featuring a free kids clinic, swag, and celebrity guest Bdot, NBA Impersonator. We of course had to have some games against the LAPD’s Official Basketball Team, and a surprise visit from Santa Claus himself! The day was full of highlights and was featured on Ballislife with the caption “Officer Down!”, as one of LA’s finest officers got crossed up and hit the pavement while his opponent went by.

The season of giving continued as we celebrated at the Oakwood Recreation Center in Venice with our “Shoes to Fill” toy and shoe drive. This day featured some of the best middle school teams from the LA Area in a one day tournament to showcase their skills. The excitement reached a feverish level with a high flying celebrity game that included Manny, the winner of the “Rap Game” and Najee, the Blue Power Ranger as well as our own VBL All Stars. Our instagram highlights the dunks that were put down, flying santas and the children going crazy with inspired to keep working hard at their craft. It was a day filled with giving and vision to one day be at the level of these elite athletes.

Thank you everyone! We are grateful for our 11th year, from the renovation of our home court to winning of the World Championships. We’re looking forward to 2018 as we grow to fulfill our goals with more building, competing, and elevating.

See you on the courts!