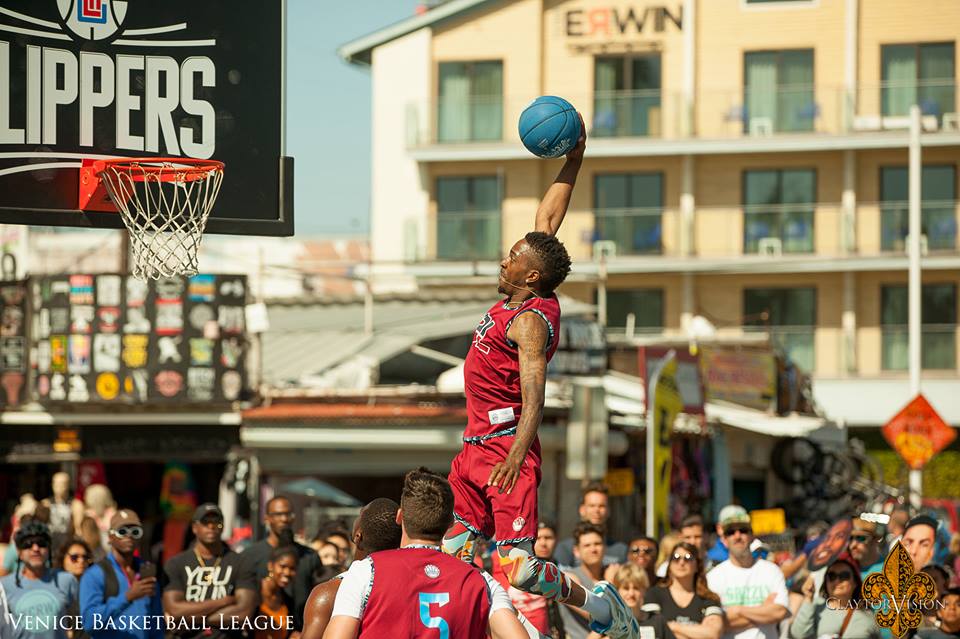 The community came alive this past Friday as the Venice Ball League (“VBL”) hosted Clipper Nation, celebrating the Clippers 4-seed in the 2017 NBA Playoffs. The sun shined bright as the crowd pumped up Venice Beach. With Venice’s own masterful emcee Mouth Piece, aka the Voice of Venice Beach, providing play-by-play on the court and the Clippers’ own DJ Dense on the turntables, the action was live all afternoon.

A Perfect Warm Up for the 2017 Season

VBL showcased some of its star-studded talent, veterans and rookies alike, with a series of 5 on 5 games. These exhibition games were the first VBL games of the 2017 season. Glad to have Clipper Nation on hand to kick things off right!

The opening tip was won by Red Team’s Saved By The Bell (“SBTB”), fresh from a season in the Chinese Basketball Association. He started things off with a monstrous dunk over
Johnny Depp doppelganger Tauras. Mouth Piece let the crowd know one of VBL’s most important rules: get posterized, hit the bench! Tauras had to take a seat for 2 minutes to think over life decisions and the less-than-impressive start to his VBL summer.

“It’s a good rule,” Tauras said after the game. “It really wakes you up.” No kidding – bet Saved By The Bell’s shoes on yo head woke you up too!

Don’t feel bad though, Tauras, it wasn’t just you. SBTB went on to hammer down 5 more dunks in a row, giving The Red Team an early 6-0 lead. But The White Team came roaring back, led by the unflappable Jumpman Big. At just 20 years old, Mr. Big showcased a nasty 360 to rally his team within 2.

The Red Team prevailed however, coming full circle and finishing with a slam from the deadly SBTB to win 16-13.

The Venice Community Shows Out

After a couple VBL exhibition games, it was the crowd’s turn to get into the action. Lance, a high school hooper from Illinois here in Venice for a senior trip, stepped on the court and showed the crowd his best slam.

When asked about the dunk Lance had to say: “Awesome, man. The spirit here is amazing.” Agreed, Lance. Not bad for your first time on Venice Beach!

Some other members of the crowd took on the task of playing with the best of beach basketball in Los Angeles. VBL vet and streetball legend Sik Wit It made a fool of some poor beachgoers who made the mistake of trying to defend him, and Jumpman Big continued to lay down some sicknasty dunks.

After the games, it was Clipper Nation’s turn to take the court. Thanks to the Clippers Spirit for their flawless performance and the Dunk Team for lighting up the court with high-flying throwdowns.

Congrats to all the winners of FREE Clippers playoff tickets, including 91-year-old Dorothy. Like Lance, it was her first time on Venice Beach!

The Clippers Dunk Team left the court simmering, and DJ Spencer Ludwig brought us home with a poppin dance mix to end the festivities.

It was a great way to kick off the Clippers playoff run and open the VBL season. Thanks to everyone who joined us, and for all the beach ballers out there, don’t forget that VBL tryouts are coming up fast — so sign up today!

Stay tuned for more on this event, including highlights, videos and photo galleries right back here on VeniceBall.com. And don’t forget to follow us on Facebook, Twitter, and the Gram.