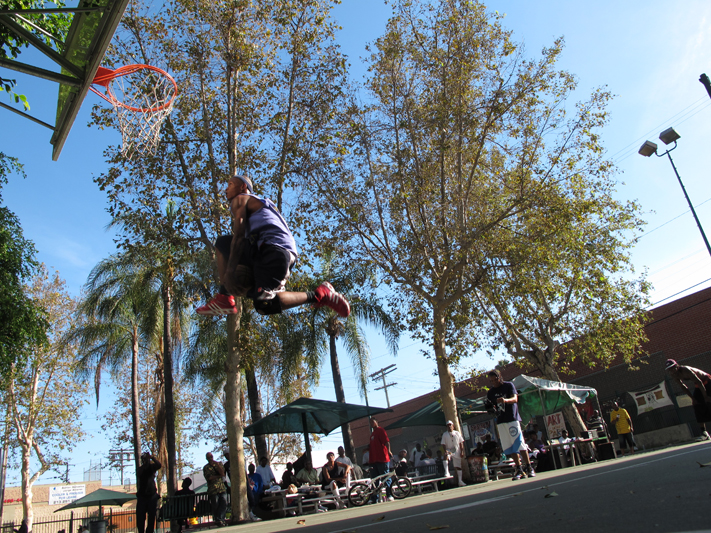 VBL all star players (Mute, The General, Flip, Yaya, Dragon, 100,000 worth of hair and Nsum) came down to skid row to play a few games. Crushow and his crew gave us a warm welcome and a tough matchup of Glady’s park. The Voice of Skid Row and Commisioner Jeff were the host and kept it live the whole day. As to expect The Ambassadors played a really physical game but VBL came out on top for all 3 games with Flip hitting the deep 3’s and Mute with some fantastic dunks. Yaya had to shut the house down with some 360 windmill’s and between the legs slam dunks. General Jeff “you do not have to go to staples center to see the best athletes in the world battle it out, you can see it here live in Glady’s park…”

Skid row or skid road is a run-down or dilapidated urban area with a large, impoverished population. The term originally referred literally to a path along which workingmen skidded logs.  After the games we took a walk around to see and document the lifestyle people live down there. Thousands of people living in the streets within a 2 or 3 city block range with no where to go. The smell down there is spicy Austin” smells like my old frat house”.

Let’s make a change and help this community in need and the people that are really making a difference down there. Let’s show these kids and adults that there is HOPE for a greater future   http://skidrowstreetball2.webs.com/

Catch some good runs any day of the week at this great park. Good competition and fun group of guys. Do not get fooled by the area, the playground is well maintained and the guys will show you a warm welcome. Say VBL sent you for world class welcome

Like its close neighbor San Julian Park, this is also a gated green area in the heart of Skid Row.