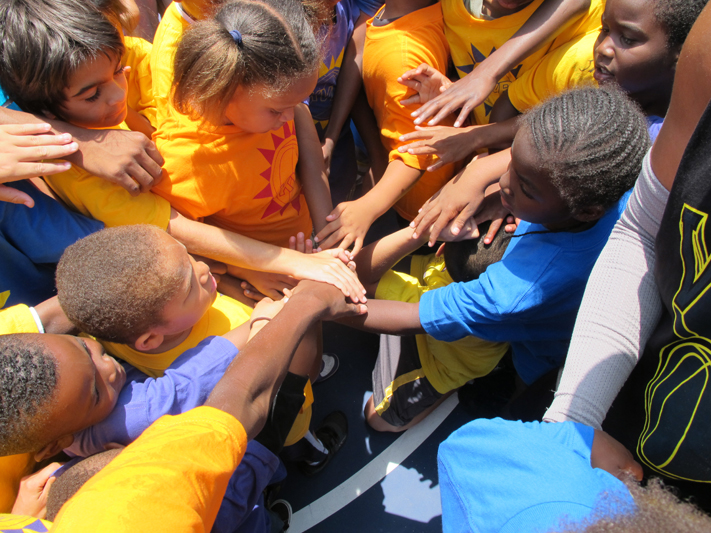 The day started 7am with the KVBL. We had a bus load of kids from South Central to join the celebration. Special thanks to Kristen from Sidewalk Cafe for donating the excellent grapes and strawberries. They were well needed since our Chef BeLive was out of town. Leilain and Nicole were here to cover and make excellent smoothies and salads for the kids. As usual we started with fundamental basketball drills, footwork, went into some body structural alignment, beach run, parcour threw the kids playfround, 3on3 and 5on5 set of games and finish off with Yoga and a healthy lunch of course. Big thank you to Katrina who came with a bus load full of kids from  South Central and for making a difference in kids lives.

We had two new teams that were introduced to The VBL this week, Venice Heat (LAFD) and The Bartenders. It was a nice opening game with the Scratch Academy warming up with some fresh beats. These guys always come with the best sound and the freshest DJ’s.

We proceeded with the Free Agents VS Kill the Hype game where ZigZag came late and stole the show with some dazzling tricks and great finishes.

We moved on to our 3rd game with United Nations VS Hollywood Hoops rivalry game. This game made it to over time with Ladies Man being the sharp shooter of the day and led his team to victory.

The most anticipated game of the day was The Mean Ones VS Team Advantage who took the Belt from the champs last week. The Mean Ones played hard and put on the show but the fundamentals size and power of Advange Basketball was no match for the intensity.

The grand finale game was Skid Row Ambassador (SlamBall) VS Sunblock with 2 special addition to their team Terrel Owens aka TO and Rashid Byrd aka 7Nsum Change from Sac Kings. Everyone came to play but way too much power for Sunblock… Stay tuned for video