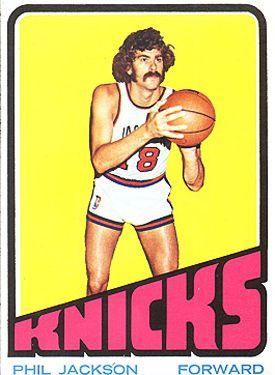 Moonbeam Jackson was always going to be a shoo-in for a Hall of Fame nod with an almost unparalleled coaching record, and not forgetting the nine NBA titles! Legendary Boston coach, Red Auerbach, also has nine titles, but the old Celtics strongman never considered Phil is equal. To be honest, Red thought Jackson was a ‘lucky’ Phil for going into situations with ready made dynasties, never having to build a team from the bottom up. Well, Auerbach would be rolling in his grave now that Jackson’s bust joins his in Springfield, and that many consider Jackson his equal, if not his superior. Jackson’s journey to the Hall of Fame was almost as eccentric as his coaching methods. The odyssey began in the early 80s when Jackson took up the CBA coaching position with the Albany Patroons in Woodstock of all places. From the very outset the Zen-Master was different in his coaching methodology, leading the bottom of the barrel Patroons to unimaginable heights. The butt end of the standings, Albany team within weeks showed drastic improvements, eventually beating the CBA All-Stars in a game. What came out of his time with the Bulls? Oh, try six titles in eight years, with a further three more with the Lake Show for good measure.

Don’t even for moment think that this hippie coach doesn’t have a massive ego – he does. However, what distinguishes him from the rest of the coaching fraternity is that he relinquishes control over to his players, appealing to their intellects. Yes, many players might not be ‘book smart’, but when it comes to basketball and athletics, they’re the sporting equivalent to Einstein. Genius can be measure in more than one way.

Even when his squad is getting killed out there, Moonbeam can be found sitting on the sidelines as serene as Buddha himself. That’s what makes him special.

Need further proof of how out there Jackson is? Well, now that you’re all there sitting in a purple haze, here is what Library Journal said about Moonbeam’s book about his coaching days with the Bulls in Sacred Hoops: “Jackson demonstrates how he adapts the precepts of Zen Buddhism, the ways of the Lakota Sioux, and other alternative styles to the task of coaching. They range from group meditation sessions, to hanging Lakota warrior items on the locker room shelf, to splicing segments of the movie ‘Wizard of Oz’ into game films to make a point.” (ESPN.com, 2007)

Or in his 1975 tome, Maverick, Jackson, wrote of gaining basketball insight by consuming LSD.

Wow, wow, wow, once I stopped being distracted by the shiny tin foil in front of me, and after I go to 7-Eleven and get my hot pocket, I am getting those books!

Today’s video is a very funny one of NBA player Jalen Rose visiting the Lakers back in the day when Kobe and Shaq were on the same team, but not necessarily on the same page. Let’s reminisce while we play the bongos.