We are about to demonstrate that posterisation is something that can happen to anyone!

APL just launched their concept 2 shoe and will showcase it’s ability weekly at Oakwood Rec Center. If too much damage is done  we might have to ban the shoe from The VBL. 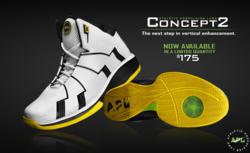 Over the past eighteen months the APL team has worked diligently to engineer the Concept 2 upper, mid-sole and outsole to work in concert with our Load ‘N Launch™ technology to both increase vertical leap and enhance maneuverability on the court.

Athletic Propulsion Labs Co-founder, Ryan Goldston said, “With its unique construction, the APL Concept 2 fits completely true-to-size and provides the secure feeling of a basketball shoe that is designed to perform at the highest level of competition. The upper materials are a combination of the finest synthetics, microfiber mesh and special anti-microbial linings to keep the foot comfortable and performing at the maximum level throughout extended periods of play.” Adam Goldston, Athletic Propulsion Labs Co-Founder, added, “Over the past eighteen months the APL team has worked diligently to engineer the Concept 2 upper, mid-sole and outsole to work in concert with our Load ‘N Launch™ technology to both increase vertical leap and enhance maneuverability on the court. The new APL Concept 2 is a true player’s shoe designed to take your game to the next level in vertical enhancement.”

Athletic Propulsion Labs was founded in Los Angeles, California by twin brothers Adam and Ryan Goldston, two former University of Southern California basketball players. The company is dedicated to the creation of world-class, breakthrough technology that significantly enhances the performance of athletes in a variety of sports. The inaugural product from Athletic Propulsion Labs®, the patented APL® Concept 1 and the Concours basketball shoe and the brand new Concept 2, feature the revolutionary Load ‘N Launch™ Technology. The patent-pending Load ‘N Launch™ device is implanted in a cavity in the forefoot of the shoe and serves as a ‘launch pad’ by taking the energy exerted by the player and increasing lift with the aid of an intricate, spring-based propulsion system. In biomechanical testing at a leading west coast university laboratory, the Athletic Propulsion Labs® Concept 1 shoes delivered increases in vertical leap of up to 3.5 inches when compared against a leading competitive brand’s most expensive basketball shoe. * Results vary based upon the athletic ability and physical conditioning of the individual. APL® Concept 1, Concours are available at $150 and the Concept 2 basketball shoes are $175. All three styles are sold exclusively on the company’s website at http://www.AthleticPropulsionLabs.com.

APL’s Concept 1 basketball shoes were introduced on March 24, 2010. The NBA ban of the APL® Concept 1 shoes occurred on October 19, 2010 and marked the first time in the 64-year history of the NBA that a shoe was banned because it provided an “undue competitive advantage.”

For more information on Athletic Propulsion Labs, please visit the website at http://www.AthleticPropulsionLabs.com or http://www.APLbasketball.com.