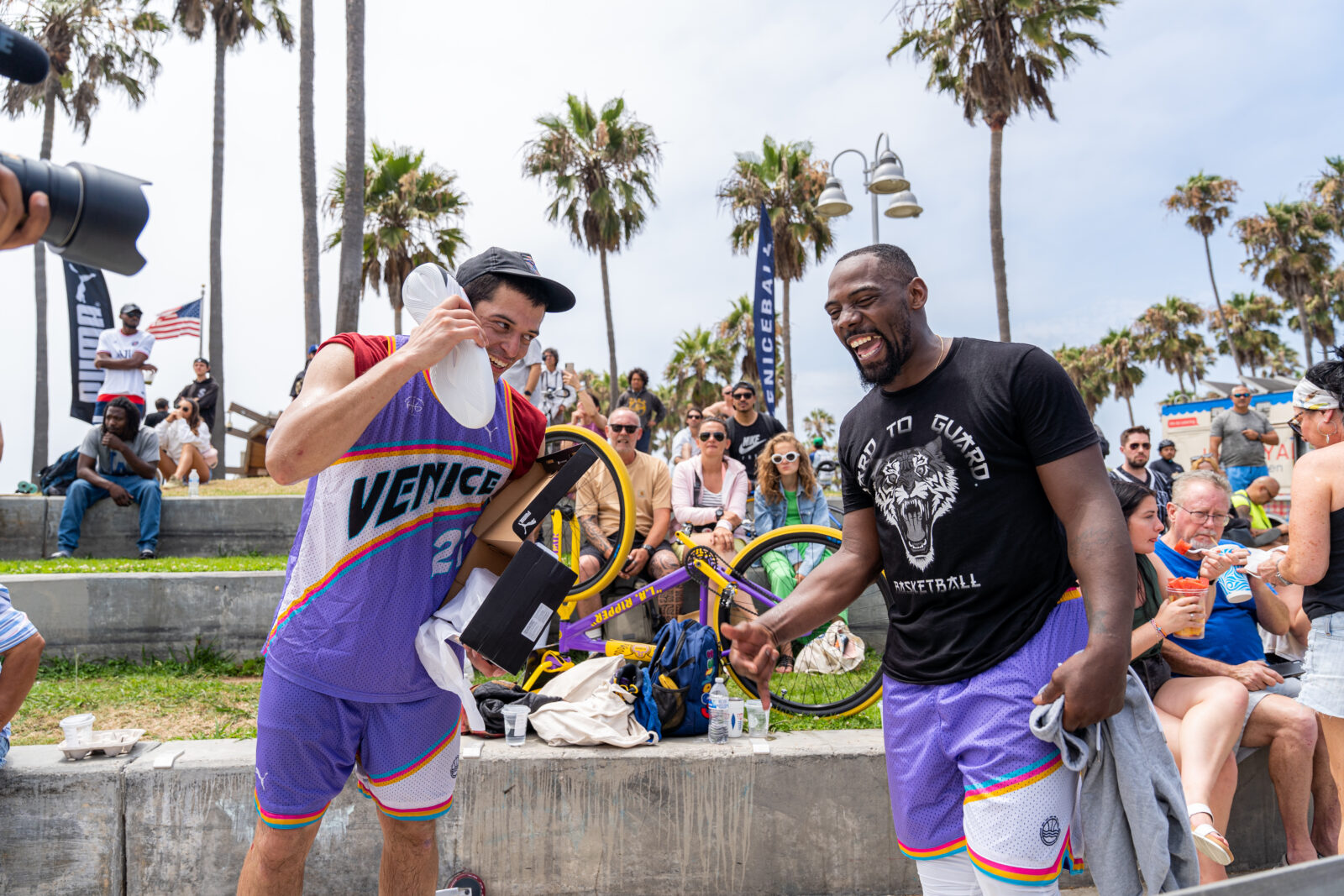 Another Week in Hooper’s Paradise

The opening match-up of Week 5 featured the veteran Sunblock x Soleword (4-1) squad facing the competitive Future Mood Studios (2-3). Sunblock came away with an 83-71 victory, again relying heavily on another strong performance by MVP frontrunner Julius ‘Juice’ Billsbrew, who followed up Week 4’s historic 63 point game, with a more humble 26 point, 5 rebound, 5 assists, and 4 steal game. From opening tip, Sunblock was in the drivers seat, exploiting matchups through their size and athleticism. NFL Hall of Fame and Streetball icon, Terrell ‘TO’ Owens knocked down 14 points, while 4x MVP the Mute knocked down 4 threes as part of his 15 point contribution. AJ ‘Chosen One’ Harris again was impressive on both ends of the floor dropping an efficient 16 points with 7 boards, while handling the defensive stopping duties for Sunblock, applying relentless pressure to Future Mood scorers.

With the victory, Sunblock moves closer to the top of the standings and presently holds the 3’rd seed and a first round bye in the playoff picture. Meanwhile, Future Mood has picked up three consecutive losses after a positive start to the season. Grizzly Moonz, has been the team’s most consistent performer, coming away with 16 point and a handful of assists. Meanwhile, VeniceBall Intern, Wilson ‘Carrot Top’ Pool, who’s been helping off the court, was able to make his VBL debut, and showed significant presence, leading his team with 6 assists, 5 steals, and 1 ball-to-the-face after an errant pass. Future Mood, who lost a heartbreaker in OT of week 4, will feel slighted to not maintain a winning record after 5 weeks and will look to finish the regular season at .500 in their coming matchup against Zach and the Bball Junkies.

Game 2 of the afternoon saw, what was expected to be, a short-staffed Team Hoopbus x Woodies (4-1) vs rookie team Leune Brand (0-5), who were in search of their first W of the season. Missing star player Randy ‘White Chocolate’ Gill and his two sons Jacob ‘Mint’ and Isaiah, the family had traveled to Las Vegas to support White Choc, who was competing the OBL 1v1 Tournament for $250,000, and presented an opportunity for new talent to shine for Team Hoopbus, and shine they did.

Without the Chocolates, Hoopbus x Woodies dominated, coming away with a 73-63 win and hosting the play of the season! Almost half of Team Hoopbus x Woodies points came from newcomer and VBL Week 5 Player of the Week Brandon Moss who finished with a double-double, and a day high 32 points, rounding out his performance with 10 rebounds, 7 assists, and not one, but two sit-down posters IN A SINGLE QUARTER! The thought of a fully staffed Hoopbus team, combining Choc’s leadership and lob-throwing ability with the unreal bounce of Brandon is a scary thought for any team coming up against the squad down the stretch! Even Dan Moroni, the Hoopbus’ executive director, got in on the fun, making his season debut as a player-coach, and knocking down a bucket before electing to lead more from the bench on the coaching side. Hoopbus is a slightly unexpected 4-1, but will look to justify their place at the top of the standings this Sunday, taking on the undefeated and contending champions SNS to secure a top 4 seed and a bye in the last week of the regular season.

XvsX Sports (4-1) faced the highly physical Top Dawg (2-3), coming away with a 63-55 victory. NBA Champion Metta World Peace, owner of XvsX, pulled up to support and and coach his team to their second consecutive victory. Once again, XvsX Player of the Game Honor went to Emmanuel Brown, his 4th. Averaging 18.8 ppg, the league’s 5th highest scorer finished with 25 pts, hitting 4 from behind the stripe. Meanwhile Desi also showed out, finishing with a double-double of 24 points and 12 rebounds. XvsX will face a tough matchup in Week 6 against Fentwood Hoops, with both intently battling for improved playoff seeding.

Top Dawg was plagued with foul trouble from the game’s start, forcing the team into a more conservative approach and limiting playing time for their key players. Top Dawg’s Azhon ‘Baby Shaq’ Davis’ stepped up, scoring 19 points on a three-point clinic, knocking down a team-high 5 threes, Top Dawg ultimately falls to 2-3. Justin ‘Ninja’ Cornelius finished with another respectable stat line, going for 12 points, 6 rebounds, and 3 assists.

The fourth and final game between Timeless (3-2) and Fentwood Hoops (3-2) was the day’s most exciting game, coming down the wire to the final seconds. Timeless had looked an unstoppable force through the first three games of the season, and were seeking to bounce back from a tough loss last week. Facing up against hungry rookie team Fentwood Hoops, Timeless would ultimately fall short in a 73-71 loss.

Averaging 17.8 ppg, 3’rd in league assists and 2’nd in rebounding, Maurice ‘Mo’ Jones once again made his presence felt on both ends vs the fast-paced and high-flying Timeless, dropping 28 points with 10 rebounds and 4 assists, while earning his third Player of the Game honors. One-two punch Daytone ‘Tone’, who was missed last week by Fentwood, balled out again his return, finishing with 18 points, 7 rebounds, 2 assists, and a big block. Ultimately this was a statement win for Fentwood Hoops, who are a shot away from a 4-1 start to their VBL franchise. The team will be oozing confidence after defeating Timeless and will look to finish their season with a victory over XvsX Sports.

For Timeless, after starting the season at a break-neck pace, the team will need to re-find their spark moving into the post-season, as they shockingly sit on the outside of the top 4, and a first round bye, for the playoff picture. The return of Dame ‘God’s Prodigy,’ who looked a front-runner for MVP averaging 22.3 ppg before missing two games, can’t be understated for this young team.

The second day of week 5 games premiered with Hooperverse (0-5) vs. Hard to Guard (1-4) in a battle of two scrappy teams itching and highly-motivated to take home their first W in the ’22 VBL season. The game, which would not be expected based on team records to be a prime matchup, turned out a back and forth thriller, as the evenly matched teams played to the final seconds in an OT battle at crunch time. Hard to Guard proved the team that was indeed harder to guard, coming up with a 58 – 57 victory to secure win #1.

Player of the Game honors went to hustle-player and defensive specialist Jeff Montenegro, who came up huge for Hard to Guard by contributing twelve points and playing shutdown defense, coming away with 9 steals and 4 blocks. Wess, ‘Sydney Dean’ and Juice were valuable contributors for Hard to Guard with 24 combined points and six combined assists. Newcomer and top HS recruit Solo Bailey finished as Hooperverse’s top scorer with 20 points and five assists, showing an elite finishing ability and touch uncommon for a player his age.

After a blowout loss against SNS in Week 4, Team Born X Raised (3-2) was determined to bounce back vs. Team Hamilton x Wilson (1-4). Right out of the gates, Born X Raised had something to prove, coming away with an 89-79 victory in the day’s third game. Newcomer Michael Fry received Player of the Game honors, dropping a 30-piece and hitting 5 3’s in his debut. Stars in their own right, BxR’s LaQuavius ‘Q’ Cotton and Kenny Barnes played the roles of sidekicks, combining for 38 points. Kwah ‘Lethal’ Gredic aka KG played the floor general, dishing a ’22 league record 11 assists, and ensuring his teammates had easy looks at the rim. BxR have looked shaky at time playing big games, but a tightening of the roster and rotation, the arrival of Mike, and a burgeoning team chemistry all point towards the squad being a dark-horse in the playoff picture. The team will look for a statement win against the talented-but-struggling Timeless to build momentum into the post-season.

For rookie Team Hamilton x Wilson, consistency in the starting lineup has been an issue as personal game-to-game has varied. With a BxR lead of up to 27 during the game, the highlight for Hamilton came as Jordan ‘J Doota’ lead a furious comeback to bring his team within six points. Though his week high 42 points, and eight three-pointers, ultimately came too late, perhaps it is a sing of a post-season spark for Team Hamilton.

Game three was the match-up of the day and featured the undefeated reigning champions, SNS (4-0), vs. Bball Junkies (2-3). SNS was the heavy favorite going into the game, but BBJ and star Zack Hinton, averaging 23.4 ppg (2nd in league) and first in rebounding, were determined to ride a two game win streak into an upset over the champs.

Zack scored a game-high 27 points, along with eight boards, two steals, and two blocks. The game was close the entire way, and both teams had a chance of hitting game winners. With a tie ball game in the final possessions, Zack missed a fadeaway jumper from the left block with five seconds left and SNS air-balled a prayer from outside half court to send the game to OT. In the 3 minute overtime, SNS’ experience and composure were on full display as they blazed BBJ out the gate, scoring at will on their first three possessions, and ultimately outscoring BBJ by nine points. Reigning Finals MVP, Jordan Giusti (9pts) had four steals, five assists and a clutch baskets to seal the win 82-73. The arrival of Gerald Williams II for SNS is concerning for the rest of the league, as last years key player returned to a 16 point performance and taking on team duties as primary ball handler. SNS had balanced contributions yet again, with six players scoring in double digits, demonstrating selfless ball movement that solidifies them as the team to beat!

SNS will look to close out an undefeated season with a double header on Sunday, taking on fellow undefeated team In the Lab in what may be the game of the season at 2:40PM, before taking on Hooperverse in the last game of the regular season at 5:00PM.

In the Lab v Project Backboard

In the weekend’s final game, In the Lab (4-0) defeated Project Backboard (2-3), in a 76 – 75 game which came down to the last shot. In the Lab’s star Ryan ‘HeziGod’ Carter, averaging 25.8 ppg (3’rd overall in scoring) had another excellent performance with 22 points, and his teammate Darius also came through with 21 points. After this dynamic duo led their team to a double-digit lead going into halftime, Project Backboard started slowly chipping away in the second half with solid play from Caleb Nash, Jamani Spencer, and Chris Staples, who combined for 43 points. Late in the game, the Hezigod scored a clutch layup to give his team a 1 point lead with a couple seconds left on the clock. Chucking up a three which didn’t find its target, In the Lab was able to hold on for another victory. Hezigod received Player of the Game honors, his 5’th.

Going into the last week of the regular season, In the Lab is seeking an undefeated regular season in the franchise’s first year in the league. Playing a double header against two of the best team’s in the VBL, Sunday will be pivotal to evaluate In the Lab’s success. While a 6-0 record will guarantee a first placed seed a 4-2 record may just fall short of a first round bye. In the Lab won’t be worried, and fully expect their core of Hezi, Dom Lanier, PeShon and Darius to power their team deep into the playoffs.