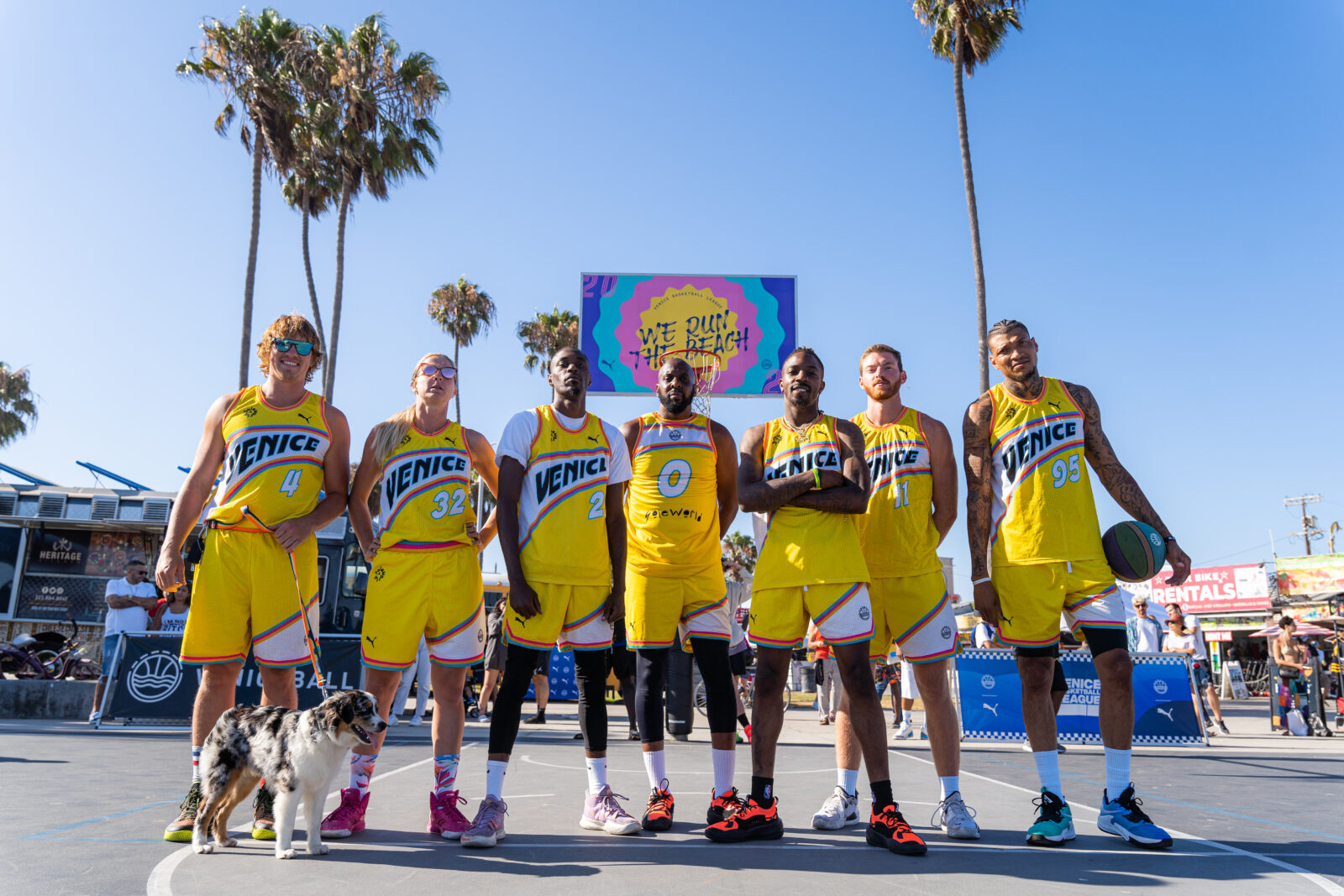 Welcome to another edition of the VBL recap of the week, and my goodness what a week it was! Week 4 featured thrilling match-ups, jaw dropping posters and most importantly record breaking performances. From Zach Hinton’s 32 point game to HeziGod’s 26, to the VBL all-time record breaking performance from Juice, we’ll cover all the major moments you need to know to stay up to date in this edition of the VBL recap.

The weekend began with a matchup between Top Dawg (2-2) and Leune Brand (0-4). The game, which finished 71-62 in favor of Top Dawg, saw last year’s Most Improved Player winner, Azhon “Baby Shaq” Davis, earn his first player of the game honors, with the enigmatic big man dropping 25 points while snatching 12 boards. Top Dawg led for the majority of the game over struggling Team Leune, whose captain Jamelle “JT” deserves praise for keeping his team in the game during Top Dawg runs (16 pts, 4 steals).

Additional standout performers include Top Dawg’s Justin ‘Ninja’ Cornelius, who scored 15 with 14 boards and 4 steals. Most importantly, as time expired in the first half, Justin recorded one of the highlights of the day, pulling up from 5 feet behind half-court and hitting nothing but net, sending the crowd into their first frenzy of the day. Top Dawg’s Rob ‘Flash’ Valentine additionally was a standout performer, lining the troops as a floor general, dishing out 7 dimes with 15 points and 3 long balls.

Team Hoopbus x Woodies (3-1) v team Hard to Guard (0-4) kicked off game 2 of the afternoon. Hoopbus, led by streetball legend, Randy “White Chocolate” Gill, aka the Billy Goat, aka White Mike aka the man with too many nicknames, saw two generations of the Chocolate family play together, as Randy’s two children Jacob ‘Mint,’ and Isaiah joined KJ Smith and Jason ‘Jamaican J’ to fill out HoopBus’ starting five.

Leaning heavily on player of the game White Chocolate, Hoopbus would take a 47 – 42 W over the winless Hard to Guard. During the game, White Mike knocked down 6 three balls, setting the extremely short lived ’22 single game three record. White would finish with 28 points and 3 steals, taking a 1-1 HoopBus squad to a 3-1 start in his two games played, averaging 25.5 pts a game in his ’22 season. Additional standout performers include Hard to Guard’s Dios Mac (16pts) and HtG rookie Blake Lander, who played his best game of the season to date, playing hard nose defense while recording a 9 point 10 rebound 4 steal stat-line.

Team Hamilton have largely struggled through four games, losing down the stretch in multiple tight match-ups. Hamilton’s most consistent performers New Williams (25 pts and 5 rebs) and Dominique ‘Left Hand Dom’ (8 pts, 4 asts and 4 stl) were unable to bring their team to a victory, with the team instead falling to a 1-3 start to the season. Moving forward, team Hamilton will need to find ways to generate additional productivity from the talented DeShaun Highler, 11 pts, and 3-point sniper J-Doota to climb the standings.

In the Lab v XvsX Sports

Unsurprisingly, the day’s most interesting match-up was a battle of the undefeateds, as In the Lab (3-0) earned a victory over XvsX Sports (3-1) on the back of Ryan “HeziGod” Carter. The stage was set for a tremendous matchup as the crowd grew and sunk tighter to the game-lines as locals and tourists alike were attracted to the cheers and jeers directed at, arguably, the league’s most entertaining and controversial player. Hezi, who earned his third consecutive player of the game honor, dropped 26 points with 4 threes. In the Lab’s PeShon (14pts) additionally was a difference maker, serving as the team’s 2nd punch for when doubles and full court pressure was sent in Hezi’s direction. Hezigod in only three games currently sits at 4’th in league scoring (avg. 27ppg) and 3’rd in three pointers.

XvsX Sports went home frustrated as their thus perfect season was disrupted by the fast paced and theatrical performance by Hezi and In the Lab. The team, led by Emmanuel Brown (14pts) who sits at 5’th in league scoring, was blown out 64 – 40. XvsX grew increasingly frustrated as Ryan’s on court showboating, swagger and antics elevated in the second half. The game led to league controversy over the application of the Iso Card, a VBL rule which isolates a 1v1 matchup at any time on the court, an issue which will need to be resolved moving forward. Regardless, XvsX will seek to get back to winning ways next weekend.

Day 2 began with Hooperverse (0-4) vs Bball Junkies (2-2), as BBJ brought home their second consecutive win in a 73 – 66 game. Week 3’s Player of the Week, Zach Hinton, similarly earned player of the game honors for his pivotal role (32 pts, 12 rebs) in securing his team a victory. Starting the season slow, BBJ have found their stride relying heavily on forward Hinton, who sits at second in league scoring (avg. 22.5 ppg ) and first in rebounding (avg. 12.5 rpg), with a solid supporting cast who play exceptional defense (17 team steals) and run the fast break. Vic Coast 15 (15 pts, 4 stls) and Jeremy Burr (12 pts, 8 rbs) earn honorable mentions for their performances.

Team Hooperverse played their most promising game of the season yet, leading at multiple points down the stretch, relying on scoring from newcomers Mekhi, 16 pts, and Kvlon, 12 pts. The Metaverse company has still yet to find consistency on the court or in their starting lineup, but will look for a series of bounce-back games to garner momentum into a post-season push.

In of the weekend’s most exciting games, Project Backboard (2-2) secured a 79-77 victory over Future Mood (2-2). The game, won by a 3 from Mark Anthony with an expiring clock marked the season’s first overtime, as the game finished in double OT. Mark Anthony, for his game winning shot, brought home player of the game honors scoring 14 points and collecting 5 rebounds. Additional standout performers included Jamani Spencer (14 pts, 10 rebs) and captain / dunker extraordinaire Chris Staples (10 pts).

Future Mood now has lost two extremely tight games, and will be frustrated to not maintain a more dominant record. Newcomer Julien ‘Ju Ju’ was arguably the team’s most important player, scoring 12 points and pulling down 10 boards. Ju’s most notable contributions included scoring key buckets in final possessions in both the 4’th quarter and the first overtime to keep his team in the game. LJ Harris (20 pts, 12 rebs) had another standout performance in his second game of the season, demonstrating the touch of a guard, scoring a beautiful 360 lay, and the dominance of a big rejecting 3 shots. Grizzly Moons (16 pts) and Sam ‘Smiley’ Skipper (14 pts) additionally contributed.

In game 3, ’21 league champion Sneakers’n’Stuff (3-0) defeated Born x Raised (2-2) 60 – 49. SNS through 3 games this season has displayed outstanding team play and stifling defense, relying on consistent performances from the entire team, while punishing opponents who enter the paint. The player of the game honors went to Nathan Wright Jr whose double double (10pts, 10 rebounds) and defense earned him the award. Expect more team-oriented play from SNS’ Deebo (16 pts), Jordan (5 asts, 4 stls) and Dream Chaser (6pts, 4asts), as the team looks to repeat in ’22.

Born x Raised struggled with SNS’ physicality and roster depth. The team’s offense stagnated in the second half as iso-ball tendencies took over offensive possessions. Born x Raised have an extremely talented core in LaQuavius ‘Q’ Cotton, 1’st in league blocks, KG aka Kwah ‘Lethal’ Gredic AP and Sammie Archer, but the team will need more consistency in ball movement to improve their placement in the standings.

Finally, the last game of the day, and believe me, it did not disappoint in the slightest. The weekend was defined by a transcendent performance witnessed by a fortunate crowd of a couple hundred, who gathered around the frenzy that was brewing on the court. Sunblock x Soleworld (3-1) took a dominant 88 – 62 victory over the previously unstoppable Timeless all on the back of Player of the Week and new multi-VBL record holder Julius ‘Juice’ Billsbrew, who unlocked a zone beyond imagination as he exploded for an all-time league record 63 points, on an all-time league record 13 three pointers, also recording 10 rebounds and 10 steals in his triple double performance. Juice has already proved to be one of the West Coast’s most lethal shooters, hitting game-winning 3’s in Venice runs and winning 3 point contests for sport, but if there was any doubt, Juice’s performance on Sunday solidified his status, and placed him at the top of all-time Venice debates for years to come.

The rest of team Sunblock x Soleworld was content to let Juice handle the offensive duties, though Marcus ‘Monstar’ Bell (8 pts, 15 rebs) and AJ ‘Chosen One’ Harris (7 pts, 5 asts) played admirably. Before Sunday, Timeless had looked unstoppable, blowing away every opponent they faced on the back of 1-2 punches, Dame ‘Gods Prodigy’ and Elvin ‘E5’ Rodriguez, who account for two spots each in top 5 points, assists and steals. Despite missing Dame and key big Zach Andrews, Timeless was powerless to defend Juice, with each player taking their turn to turn around in defeat as the 3 they anticipated and contested dropped from as deep as 5 feet inside of half-court. Timeless’ Rookie, Elvin Rodriguez delivered the team’s best performance dropping 26 points and 10 rebounds to pair with 4 steals and 4 assists. Timeless will look to gain back their momentum this weekend and will appreciate the return of key starters.