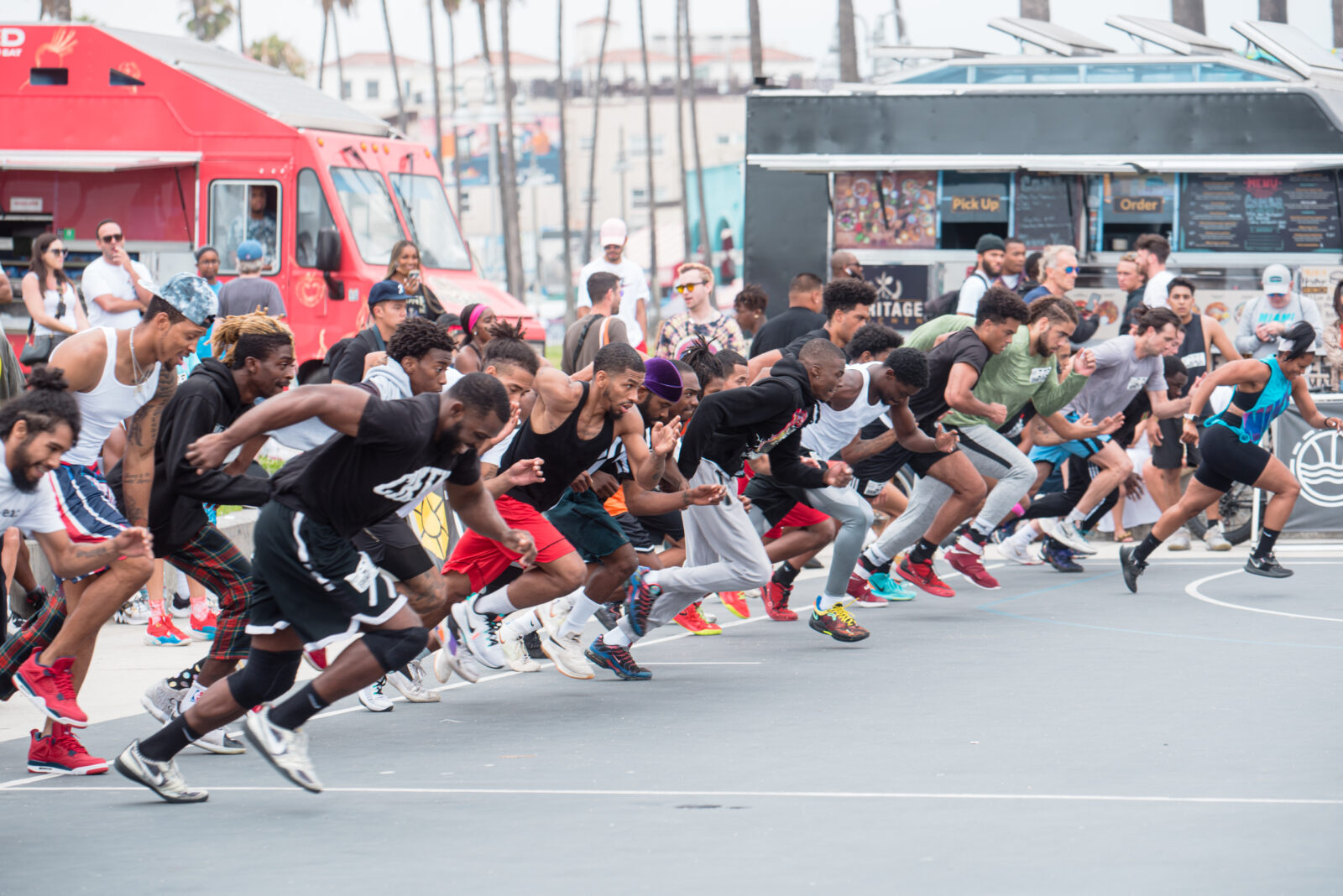 Year 17 of the Veniceball Draft is officially in the books, and though the bar is high, the event may have been the best draft to date! Foremost, we must extend our utmost gratitude to all the incredible and talented hoopers who showed up, especially those who traveled the extra miles. Amongst the talented class, draftees seeking VBL glory showed out repping San Diego, Phoenix, and Las Vegas. Overall, we saw our biggest Draft Day turn out ever with 110 players, including professional, division one, and division two athletes.

Sunday’s draft went well for some and not so hot for others. After a check-in where players physical stats were recorded, it was time to measure who was in shape to play and who needed to hit the gym. The pushup competition saw 16 team managers meticulously watching, as player after player hit the blacktop. After more than 100 booming “downs” rang out from League Official Doxx, only two remained, and with both determined to go the distance, the competition ultimately ended in a draw.

Up next, a VBL tried and true classic, the draft’s vert challenge. Like every draftee before them, players with bounce shoved their way to the front of the growing crowd, grabbed a sticker, and smacked it as high as they could reach on the backboard. Of course, VBL alumni had to show the draftees what they’re going to see on game-day’s in Venice. Strength trainer Quan “the Metahuman” Bailey set the pace for the day, tapping a foot above the rim. Jump after jump was unable to knock Quan off, until Nate Giles aka the “Praying Mantis” stepped up to jump. Nate lived up to his nickname, throwing his sticker halfway up the backboard, and ultimately retaining his second annual vert title.

The highlight of Sunday’s draft was bucket-getter and former Spanish Olympic basketball player, Helena Orts, who earned the title of #1 draftee as the first pick by team Born x Raised. Helena had made a name for herself early in the tryouts, showcasing professional polish, physicality and skills before finishing the day with the highest point total in the draft’s 1 v. 1 matchups, dropping buckets on men and women with reckless abandon . Team Born x Raised general manager, David Garcia saw the potential and Helena made VBL history by becoming the first female player to be drafted number one.

The wait is over! With the draft’s completion, we can officially mark year 17 of the VBL, with opening weekend kicking off this Saturday and Sunday, June 18’th and 19’th, at the ever-iconic Venice Beach Courts. Be sure to tap into the Veniceball socials and stay tuned to the schedule all season long! We can’t wait to welcome you all back to the one and only Hooper’s Paradise!