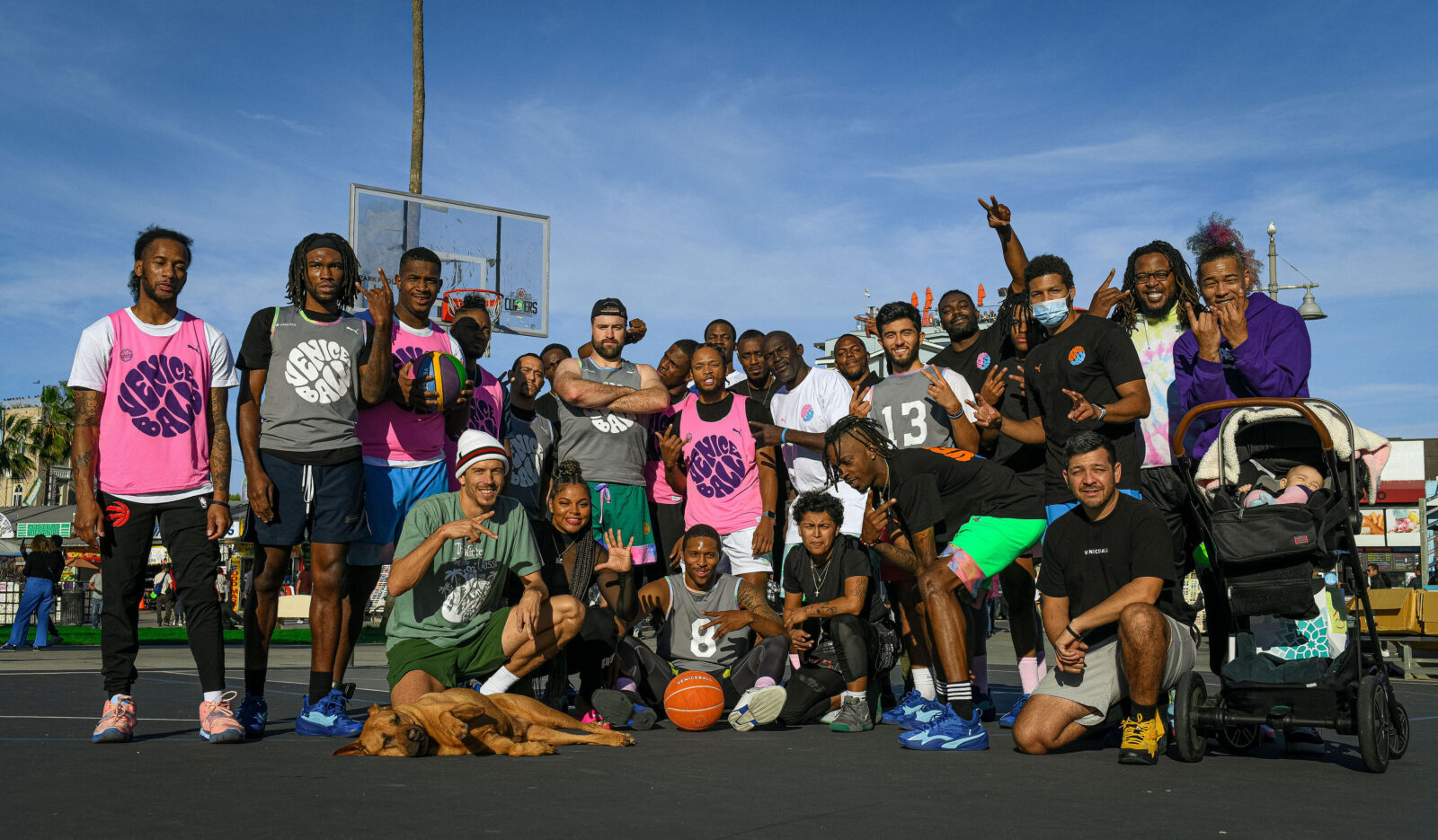 It’s the first day of 2022 and the Venice Beach Basketball courts are already buzzing with tournament vibes courtesy of Veniceball, Venice’s own basketball league founded by Nick Ansom. We all gather on the bleachers on court two to soak in the much-needed sun after a week of heavy rain and the fatigue of our New Year’s Eve festivities. Almost two years into the pandemic, yet Veniceball’s commitment to the game of basketball and to the community is evident as the players gather on the court changing into their colorful jerseys and brand new sneakers courtesy of Puma Hoops.

It’s a family affair. There are babies in strollers, toddlers chasing basketballs, Winna the dog roaming around checking on things, vegan burgers and energy drinks to keep everyone hydrated for what is to come, which is a lighthearted, high energy, spirited event featuring hours of street basketball, Venice-style.

Curious tourists gather around the court and by the time Solo Bailey, 15, dunks the ball into the basket, we have a sizable audience. His spectacular and explosive dunks make his father, former VBL great Sheldon Bailey beyond proud. Like father, like son. In the next game Bailey, or Big Shel as they call him on the courts, finishes an accurate pass from Juice with a formidable bucket. There’s great team play as the ball gets passed back and forth between Van Girard and A.J. aka CallMePhonsy and Juice. In no time A.J. sets up Girard for a masterful dunk, then Girard does the same with Juice. Juice is on fire as he runs with speeds unmatched, scoring each time he touches the ball.

As the day progresses more players show up to wow the onlookers. Caleb Nash Feemster joins the game and there’s no stopping him. He is like a mountain, and guards the ball with his whole body and gets bucket after bucket. Even Frank Wallace, 60, from South Central who has been playing in Venice since 1981 and was named MVP in the 1994 championship joins the game with his animated ways. Later, we watch the fierce rivalry between the Hezi God, aka Ryan Carter and A.J. Originally from North Carolina, Carter has made a name for himself over the past few years in the basketball circuit as the kind of “unguardable” player whose incredible skill and showmanship at handling the ball got him a sizable following and several features on BallIsLife. Rightfully so, his dizzying dribble is unmatched on the courts and it is almost always followed by a fine finish with a bucket.

In-between games, Van Girard’s daughters hit the asphalt, basketball in hand and we know all too well that soon the girls will be stepping into their dad’s shoes too. Grizzly Moonz not only is a phenomenal player, but apparently a fine M.C. as he takes over the mic to comment on the games that by now have reached formidable speeds with players whizzing up and down the courts. We all watch in awe as Baby Shaq gets bucket after bucket with the utmost confidence as the audience roars in unison. Buddha, aka Larry Boyd, brings his best as he passionately blows by everyone to get his share of buckets. And the spirit of Venice is back.

There’s so much talent on the court. There’s Dios Mac, 29, from NYC whose skills match his kingly features, there’s the Black Italian, aka Taylor Garrett Elisha, who recently took on the monumental role as a life giver as she became a mom, and then there is Angel Gutierrez Mendoza, the young Venezuelan player. Angel plays with style and class and with the kind of joy and passion that makes you want to watch him play for hours. He is like a skilled dancer, leaping through the defense, then you watch him finish his layup with a smile and his left hand behind his head, as a sort of theatrical performance. Then he does it all over again a minute later.

The sun dips close to the horizon, yet the games are still in full swing. This is Venice, Hoopers Paradise as players call it. The energy of the courts is unmatched, the spirit unparalleled. I watch Ansom’s face glow with joy witnessing the community he built through his love of basketball as he attends to his daughter who is gleeing in her stroller. The future is bright as we all welcome 2022 under the California sun, on the courts at Venice Beach where the game never stops.

One thought on “Ringing in the New Year”