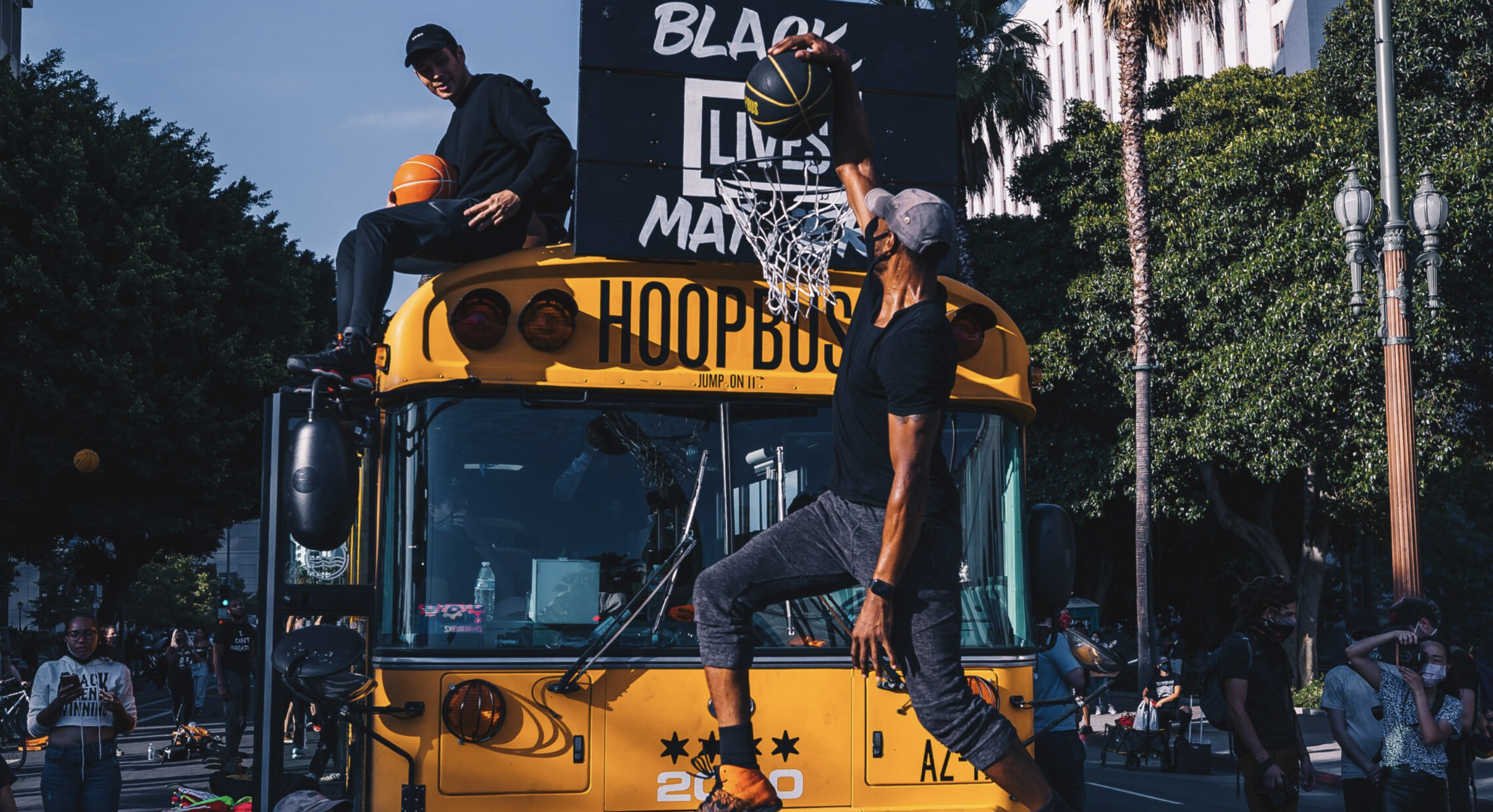 The HoopBus Is Taking Love and Positivity on Tour (sports illustrated)

Here are more stories about the Tour for you to enjoy

When you’re a vehicle of change, you go to where the change is taking place.

The HoopBus is in the middle of its national tour, bringing its own positivity to peaceful protests that continue to take place around the country.

It isn’t exactly the best time to tour the country unless, of course, you are on a mission to empower and motivate.

“The time is now,” PHREE Hester, artist in residence at the HoopBus said of the decision to launch the HoopBus Tour. “There isn’t a next year if we don’t put in this work right now by going into the streets.”

The HoopBus is exactly as it sounds, a bus outfitted with backboard and rim. But it’s also so much more, armed with likeminded people eager to bring positivity to whomever they find along the way.

It is, as stated ever so beautifully by HoopBus founder Nick Ansom, “for the people and by the people.”

And it’s taking the mission to streets.

So far the tour has been hard. The HoopBus has run into the kind of hurdles embedded into this very astounding year. COVID mixed with extreme temperatures means that the number of people at rallies has dwindled.

At a recent protest in Phoenix, protestors were almost outnumbered two to one by the police with heat soaring into 110 degrees.

“I think people have really shied away from going to the street,” Ansom said. “The group that we met are real, you know, dedicated. There’s only a few soldiers left on the field.”

But the bus is keeping its foot on the gas, forging ahead in this most important moment, keeping up the momentum for a country desperate for change.

“(We’re) moving with urgency because this is an urgent matter,” Hester said. “You know, Black Lives Matter and everything that’s happening in America today. We had to act; we couldn’t wait until 2021 for this to actually take place.”

The Bus is far more than a labor of love on wheels. It’s a basketball court, beacon of positivity and vehicle of change, literally.

The group is performing voter outreach at each of their stops and also creating basketball courts for communities bereft of these types of things. A GoFundMe page illustrates the outpouring of support the group garners.

“We’re actually bringing the change by creating courts. We’re actually bringing change by going into the communities that people don’t really want to go into,” PHREE said. “We’re feeding these communities. We’re designing new courts. We’re giving them shoes. We’re giving them clothes and we’re giving them the confidence to be themselves and express themselves in a way that I feel in the future will lead us to a better way of life, because we’re planting the seeds for the kids to grow up and understand that, no matter what, pursue your dream by any means.”

Ansom was inspired to enact this kind of change as a direct counter to President Donald Trump’s initiative to build more walls along the country’s southern border. The motto that continues to drive the HoopBus is to build courts, not walls.

“It’s not dangerous for us because we’re coming in there with love and leading with love,” Hester explained. “And I think people (appreciate) something that’s really genuine and heartfelt.”

There is something about having a bus fitted with a basketball hoop that captivates the mind and starts a conversation.

The bus pulls into a nondescript gas station and suddenly there are a couple of dozen people around asking simple questions that may lead to profound change.

“The idea of this HoopBus being kind of a 24-hour protest and wherever we show up it reactivates,” Ansom said.

“(The bus) is going to make change but also we learn about ourselves, learn about each other and learn about cultures and communities. And, you know, it’s pretty special.”

Someone asking what this bus is and where it’s from eventually leads to a discussion on voting, the Black Lives Matter movement or simply the issues facing that community in which the bus finds itself.

It’s more than a bus; it’s a friendly stranger visiting one city after another, learning but also leaving that city just a little bit better than when it found it.

Ansom and Hester and their group continue to forge ahead, looking toward the final stop in Washington D.C., joining the March on Washington.

After this, the bus will make an eventual return to Venice, Calif. Stopping at places like Chicago and New York City, where it will continue to nudge this country in the direction of positive change, one mile and one basket at a time