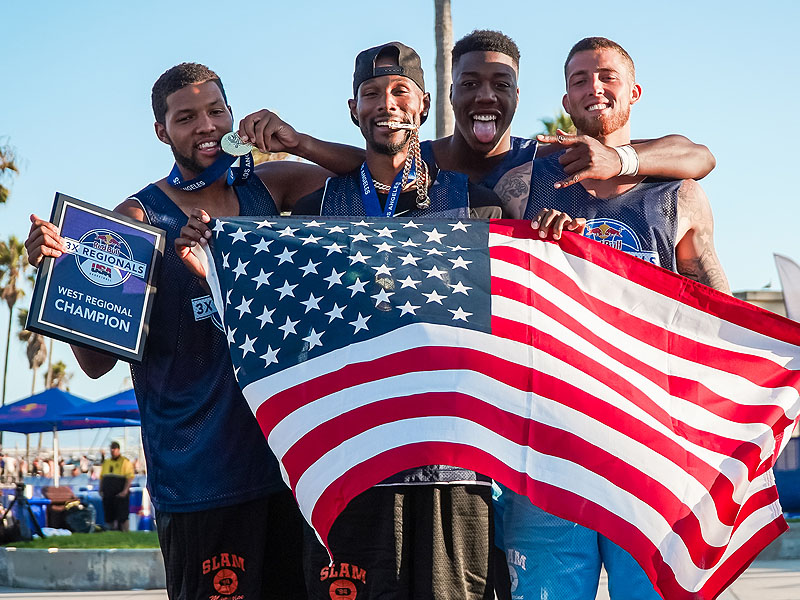 It was a Hollywood ending on the iconic courts of Venice Beach, as Chris “EveryBodyHateChriss” Staples nailed a two-pointer with time expiring to lead VBL SLAM to a 21-20 triumph over New York City, earning his team a spot in the 2020 Red Bull USA Basketball 3X Nationals. It was a re-match from pool play stage earlier in the day, when New York City beat VBL SLAM by a score of 20-16.

“We were not prepared the first game,” said Staples. “We came out sluggish in the morning and were down 10-3. We came back, but we knew we couldn’t make the same mistakes the second time.”

On the women’s side, LA Premier cruised to a 21-10 victory over Force 10 Select in the finals, punching its own ticket to the nationals. LA Premier used their combination of athleticism and strength to overpower competition all day long.

“This format is fast paced, it’s what I love to play,” said Brianna Barrett of LA Premier. 10-minute game, physical play, no fouls, I love the streetball aspect. Now we prepare for nationals and get our work in so we can do exactly the same thing we did today.”

In all, 32 elite men’s and women’s teams based on performance at Red Bull 3X qualifiers or other 3×3 tournaments made their way to this final stop of the Red Bull USA Basketball 3X Regionals.

The players are competing to accumulate enough individual FIBA points with the goal of moving on to the Red Bull USA Basketball 3X Nationals in April 2020 where 24 men’s and 24 women’s teams will be on display. From that event, USA Basketball will select four men’s and women’s players — not necessarily all from one championship team — for the men’s and women’s teams that could play in Tokyo less than a year from now, should the USA qualify, as 3×3 makes its Olympic debut.

The 2020 Summer Olympics 3×3 competition will be played on a half court with a 10-minute game clock and 12-second shot clock, where the winner is the first team to 21 points or the team in the lead at the end of the 10-minute regulation.