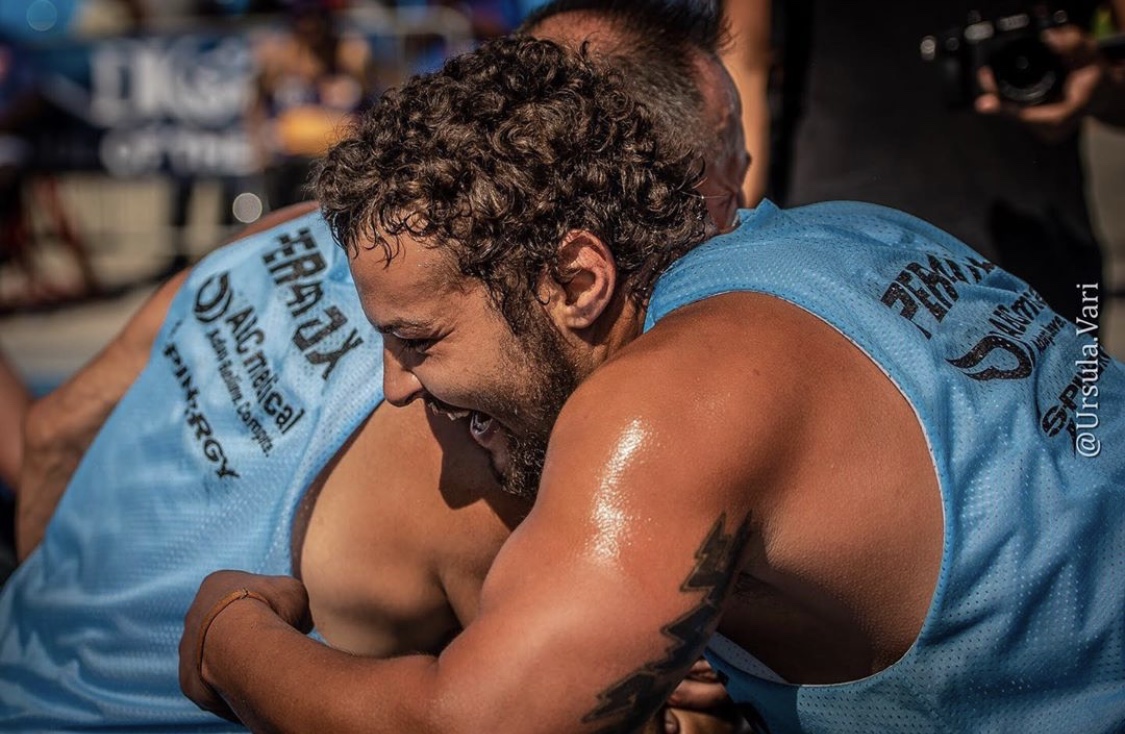 What a perfect time and place to honor our veterans! This past weekend, Veniceball teamed up with DK3on3 and hosted the 3×3 Wheelchair tournament at the beach. Hooping was real and the event mixed good vibes, competition and hard battles for the $2,000-dollar prize.

The format was simple, 18 Teams from all around the country showed up for a shot to win the whole tournament. Duke, UCLA and other big names came out to ball in front on hundreds of people each day.

The show started at 9:30 on Saturday morning, 6 different half-courts were dedicated to the veterans. We have seen some amazing plays throughout the morning, and everybody enjoyed the vibe. Three teams went undefeated in the morning with the record of 3-0, that’s how Duke, the Highrollers team and UCLA were seen as the teams to beat. 12:30 was time for lunch break. A cozy moment where all the players and staff could rest, exchange and chill before the craziness happened again in the afternoon.

Veterans, Paralympic gold medalist and media, everybody was there to witness the show continue. And it did! We’ve seen some of the best plays in the afternoon, behind the back dribbles, dimes from the Highrollers (@highrollersWBC), deep threes and teamwork, all the players went at it and showed the world that basketball has no boundaries. A community barbecue wrapped up day 1 and it was then time to get some rest before the grand finale on Sunday.

Day2: The day started with the knockout round to determine which teams were going to make it to the quarter finals. The Highrollers unfortunately got eliminated and didn’t make it to the end. It did not stop the other teams from giving their everything on the court. Games were going and 12:30 came. Time for the finals! Duke vs UCLA sounds like “déja vu”. Both teams were dominating their groups and it was time for them to face each other. That was the craziest game of the tournament, high quality matchup, hitting threes, playing lockdown defense, it was a show. UCLA came out on top and got first place. Shout out to Matt for putting on a show and scoring 11 out of 15 points in the finals.

Congratulations to every teams that showed up and represented that beautiful sport. Huge thank you to DK3on3 for setting up the entire event and letting us be apart of this amazing initiative.

The Pegasus of Venice Beach

It was a lazy early fall Sunday as I was walking up to the Venice Beach Courts with the DK3X3 Wheelchair Basketball Championship already in full swing. Two courts overrun by the greatest of warriors, veterans bound to their wheelchairs with passion larger than the Pacific. Attached to my forever partner, my camera, I set out to iconize the players, to show them the way they have never seen themselves before, to further empower them and immortalize them with split second images, to elevate them to rock star status and to show the world the greatness of their hearts. I was close range and I could hear Mouthpiece’s voice (the man running the show) through the microphone “…and “Anthony takes the ball”, again and again, “…and “Anthony” then with his signature roar “Bucket is good!!! Anthony did it again”.

I think, I heard Anthony’s name at least a dozen times in 1 minute and I was curious to know this soundingly very skilled player. Then I saw him. In his wheelchair, with his dreads flying as he whizzed through his opponents. Slamming into wheelchair after wheelchair, going for that bucket. I didn’t know why it was that his legs were no longer attached to his body or why his left hand was missing with black tape covering his wrist. And it didn’t matter, because he was as whole to me as any able-bodied person, if not more. His focus, unaffected by the bright sun, he was a warrior with beautiful wings on, his chariot trying to bring his team to a win. His tattoo-bejeweled arm -citing names of people I didn’t know but wanted to- was fighting for each ball. “Anthony again!!!”-Mouthpiece punctuated his bucket.

I spoke with the young man after the game about photography, he proudly mentioned his recent purchase of a Nikon camera. Me with my “able-bodied” yet limited mind was curious about how this young man would take photos. Anthony must have sensed my intrigue. “Let me show you my camera!” He reached behind to grab his backpack. As he was unzipping it, I felt the to urge to jump in, “Let me help you”, I said. “I got this” Anthony responded defiantly, rejecting my help and masterfully pulled his camera and his lens out of his backpack. For some time, we spoke photography related jargon and I gave him an impromptu tutorial of exposure settings. Bewildered, I stood there as his wheelchair eventually rolled him away.

There are no limitations only what our conditioned mind creates, I pondered, utterly fascinated, inspired by and in love with this young man. Although Anthony’s team didn’t win or advance to the semifinals, they won my heart over and gave me an attitude adjustment.

“It’s not about wheelchairs, it’s about basketball“, said DK, the founder of the championship. And for those of us who were at the courts that Sunday to witness the magic, the hard work, the resilience and the unadulterated humanity of these warriors it was evident that basketball is a lot more than just a sport. To many, it gives a purpose in life, a mission, a reason to wake up every day and a reason to live for and brings about thousands of possibilities and new dreams, like photography in Anthony McDaniels’ case. The men and women who were at the courts that Sunday blew my mind on all levels. All veterans, who served this country to the very point of their wheelchairs, heroes with the most impeccable of hearts, whose stories are just as inspirational as their game. So when I think of McDaniels and the rest of the players, I see them as Pegasus with wings so wide, strength and grace so profound it could lift up the whole world and its people proving yet again that humanity and human resilience is alive and well, that all is possible once one masters the mind and arrests the false belief that of “No, I can’t “. “Yes, you SO can, and beyond…” DK and his warriors proved just that.