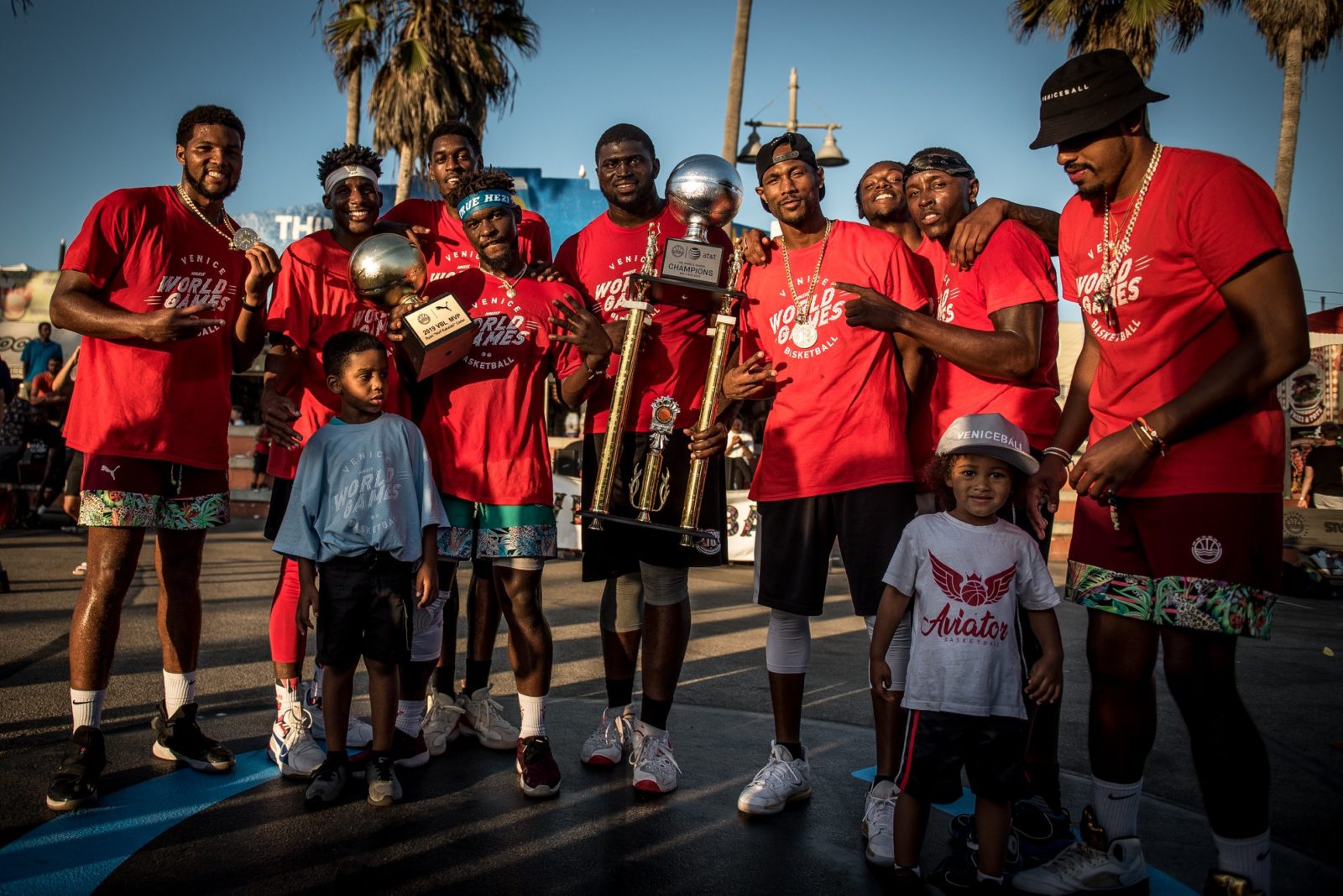 Over the weekend Venice Beach was home to the Veniceball League World Games, a two-day, 5X5 tournament, a great ending to a spectacular season for the league. The championship gave a fantastic platform to some of L.A.’s best semi-pro hoopers and skilled hopefuls. The Puma/AT&T/Wilson Basketball sponsored tournament beheld many surprises and drew an appreciative crowd who gathered under the blazing sun for two straight days.

With 15 teams competing for the $2,500 cash prize, the event culminated in a remarkable final between Panda’s Friend and World Champs. For many, Panda’s Friend were the underdogs, until Archie “I go Postal” marched his team into the finals. This young man with his unceasing energy and drive was a force beyond all imagination, running from side to side to the beat of his own drum, leading his teammates with the conviction that they CAN and WILL win the tournament. Some other highlight teams were the Irvine Meanmugs with their robust old-timers like White Shadow who at 47 is still a formidable player and “young blood” Mr. Moves Dallion King whose solid skills were evident each time he whizzed by his opponents. Although team P4E had an all-star line up with Buddha, Drewski, Jay Caldwell, Adam Stanford and the Real Sydney Dean they couldn’t advance into the final.

Also worth noting the solid performance of the “The Mercenary” from team Undisputed who poured his heart and sweat onto the court. Sunday’s games were highlighted by L.A. Lakers’ Dwight Howard, who pulled up on the mid-day games and showed some love to the Venice Beach onlookers with some memorable dunks, along fellow hoopers Chris Staples and Adam Stanford.

By the time the championship final took place a sizable and very lively crowd gathered around the court, some taking shade by the large “Codes of Culture” AT&T Led Truck. World Champs took on underdog Panda’s Friend with Archie “I go Postal” getting his team to lead often by 6-8 points. That was until Bobby Chamberlain, World Champs’ coach had a word with his men – their “time-out “ prayer often ending with the men chanting “DEFENSE”. It was a masterful interplay between Norf Cack aka Bout my Bread aka Ryan Carter and his teammates: Deshawn “Evolution” Stevens, Chris Staples, Trappy Smoov, Garrick “Dreamchaser” Wilson, Fudge, Van Girard and Bionic Brooks– an impeccably assembled team, whose members recently won the King of Kings championship in China and the 3X3 Adidas Tournament.

Ryan Carter aka Bout My Bread for World Champs

Ryan “Hezi God” Carter was scheming his way through the court with his signature hesitation moves confusing his opponents to the point where there were bodies dropping everywhere around him. If it wasn’t him flying through the court to score with no one trailing behind him, then it was a beautifully coordinated set piece between him and his teammates who finished his pass with exquisite dunks. His skill is superb but what sets Carter apart from most is his incredible ability to orchestrate a score, as if he was playing high-speed chess in his mind, having the eagle eye view of what can and needs to be done in a split second for that basket, and his high caliber team-mates deliver just that. It was one of these set pieces that won the game, when Garrick “Dreamchaser” Wilson finished off Carter’s pass as the whole court erupted bringing the team to a well-earned win.

But Archie “I Go Postal” and his team also has every reason to celebrate for they did a magnificent job braving the giants the World Champs are who in the end were the ones taking home the $5000 prize ending a great season for the league that is so much more than basketball. While the tournament was underway some players from the league along with the founder, Nick Ansom were building basketball courts in Mexico to give purpose and an opportunity to those less fortunate – a great inspiration for all to follow.