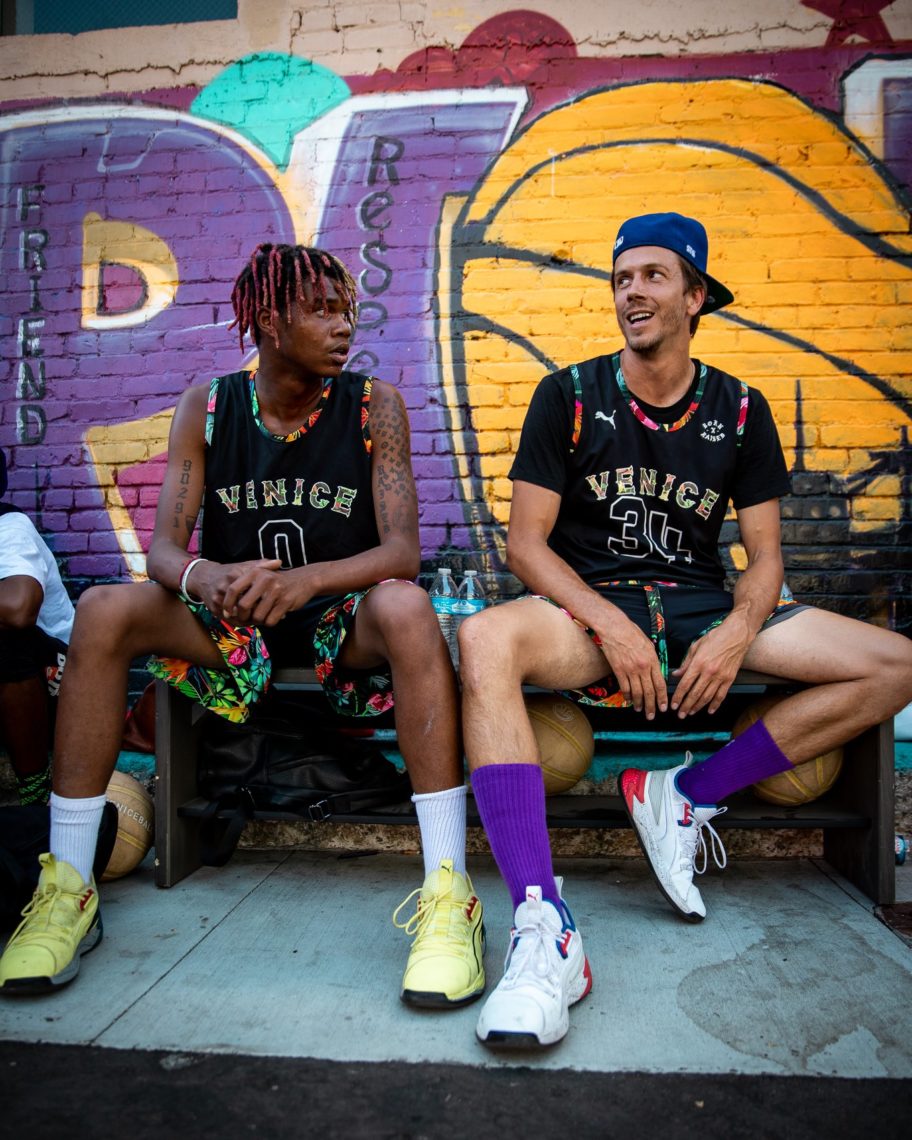 Week 8 was kicked off with Day 1of the double-header for the VBLplayoffs. The first day consisted of  4 teams in a win or go home gamefor the final 2 spots. The winners advanced to play Day 2 onSunday at Crete Academy.

Being a man of the people and living by the same love, peace and, prosperity that he encourages in every huddle before the games begin – CEO Nick Ansom and the VBL partnered with The Jack Fruit Cafe food truck to distribute hundreds of Beyond Meat burgers to the homeless people on Skid Row. Also, Ogur Cutz lent a hand and passed out over a dozen of free haircuts.

The first half belonged to Futuremood. Kenny Barnes got off to an exceptional start. He scored 24 of his 40 points in the first 20 minutes and led Futuremood into halftime up 48-39.

With their season on the line, Dompen locked in on Kenny Barnes on defense and on offense they established “Hulk” in the paint. Player of the Week Nino “Prince Of Skid Row” had himself a stellar performance. He scored 16 points and stole the ball for a new VBL record 10 times. His tenth steal came with 4 seconds left and he proceeded to make the game winning layup as time expired.

In the second half, the game remained close. The Beach Boys continued to hang around and even took control of the lead. Project Backboard remained unfazed and was able to regain the lead in the final seconds. Beach Boys had an opportunity to send the game into overtime but missed a potential game-tying 3-pointer as time expired.

Nick Ball was named player of the game for Project Backboard with 32 points, 7 rebounds, and 3 assists.

The defending champions Dompen Green Lights returned to their true form as they upset the #1 seed Playing 4 Eternity 60-47.

#8 seed Dompen jumped out the gates red hot by catching two bodies back to back to kick off the playoffs in the right direction. The first half consisted of many lead changes with both teams battling back and forth. The difference maker was Deshawn “Evolution” Stephens, the pro from Israel. He dominated the paint and helped Dompen take a 30-29 lead into halftime.

Coming out of halftime, the #1 seed Playing 4 Eternity came out flat and failed to match the defending champs’ intensity. The Green Lights outscored P4E 30-18 in the second half and solidified their spot back in the Final Four.

Deshawn “Evolution” Stephen earned the Player of the Game honors with 30 points and 10 rebounds.

Sunblock showed up and did what they were expected to do. Big Mike, also known as Block Party, anchored the paint on defense and the 4 time MVP Brandon “The Mute” Fields held it down on the offensive end.

Sunblock took a 30-20 lead into halftime.

Papa & Barkley made an attempt to cut the lead down but their momentum was put to a halt when their star guard Amin was ejected. Sunblock then proceeded to cruise to victory and punched their ticket to the final four.

Player of the Game was Brandon “The Mute” Fields – he scored 15 points, grabbed 10 rebounds and dished out 5 assist.

Team Fairplay showcased their exceptional leaping abilities as they flew through the air catching bodies and alley-oops throughout the first half. Fairplaydominated in transition wich led to their38-28advantage at halftime.

In the second half, the high-flying act continued for Fairplay. Tori “Bionic Man” Brooks and Brandon “Big Baby” Jamar finished dunks in the paint all over the place. “Bionic Man” was named Player of the Game with 20 points, 10 rebounds and 3 blocks. Fairplay advances to the Final Four.

The close match carried on into the second half with neither team capable of going on a run. Both teams battled back and forth into the closing seconds. Marcus “The Coroner” Bell earned Player of the gamehonors – he finished with 27 points and 13 rebounds. Los Fearless clinched the final spot in the Final Four.