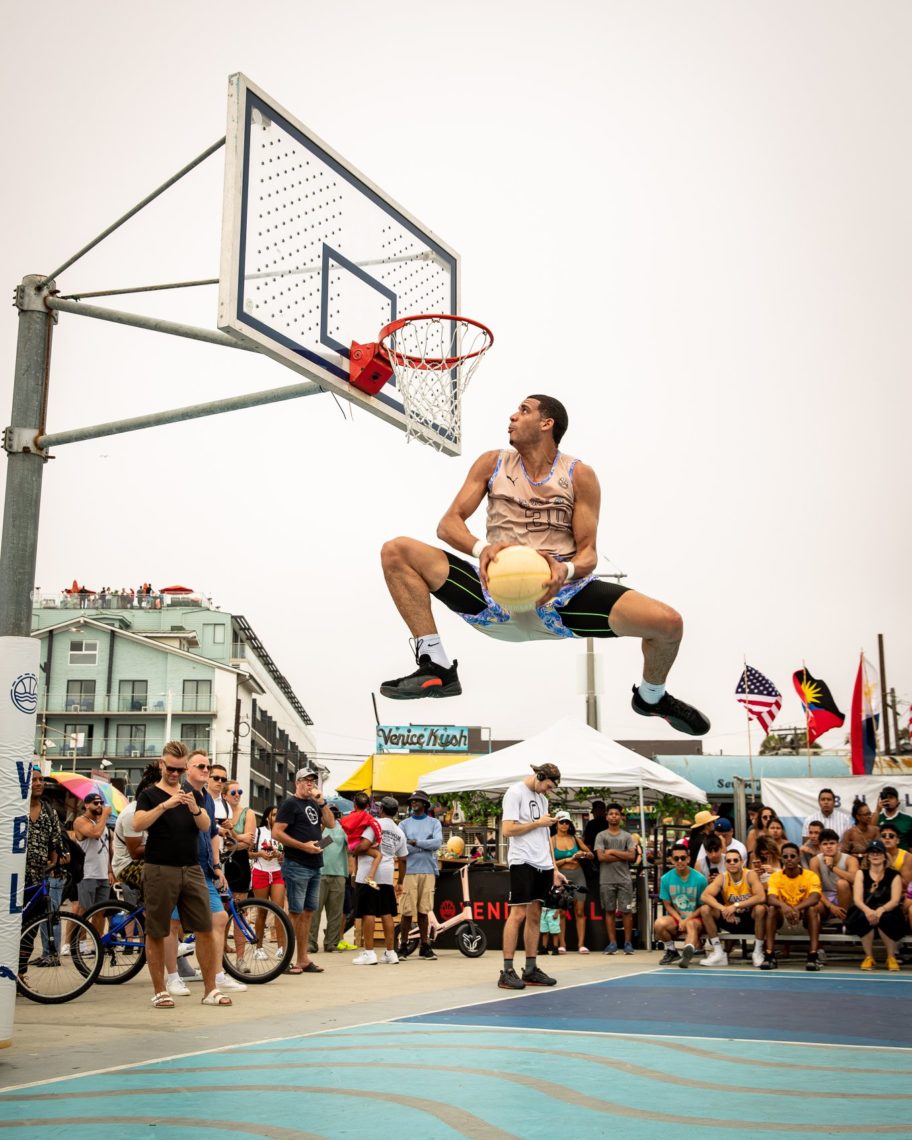 In what seemed to be an impossible event, the Venice Basketball League pulled off its most successful weekend of the year with 3 days of play. Friday games were played at Oakwood Recreation Center while Saturday and Sunday matchups went down at the world famous Venice Beach Basketball Courts, also known as Hooper’s Paradise. Each game was unique in its style of play, highlights, and extreme finishes – so read along to see if your favorite team caught a W or took an L.

Bristol Studio was knocked out of playoff contention in a disappointing loss 86-84 to Sunblock on Wheels.

With their season depending on this game, the first half was a close-knit contest. Sunblock, led by “The Chosen One,” carried a 46-45 lead into halftime.

In the second half, both squads battled back and forth knocking down big shot after big shot to keep things close. “Dolphin Boy” did all he could do to keep Bristol Studio’s playoff hopes alive. He finished with 35 points and grabbed 10 rebounds. Sunblock held a 2 point lead in the final seconds and forced Bristol Studios to turn the ball over on their game-winning or game-tying possession.

Aj “The Chosen One” Harris was named Player of the Game as he scored 23 points, grabbed 8 rebounds and had 5 assists.

Sunblock now improves to 4-2 and Bristol Studio falls to 1-5.

After needing to win one of their two games of the triple header weekend to keep their playoff hopes alive, Futuremood suffered a disheartening blow losing 81-80 to Cha Cha Matcha’s Playing 4 Eternity.

Futuremood held their own considering they were playing one of the best teams in the league. They kept the score tight and never let things spiral out of control. Playing 4 Eternity, looking to solidify their spot as a #1 seed, showed up and took care of business. They took a 47-41 lead into halftime.

Futuremood continued to scrap throughout the second half. Garrick “The Dreamchaser” Wilson and Sandro both contributed with 20 points each. Unfortunately their contributions was not enough to derail the perennial top seeded P4E. Last year’s MVP candidate Mark Anthony earned his first Player of the Game honors of the season. He scored 20 points, grabbed 7 rebounds, recorded 7 steals and most importantly the victory.

That victory can be partially attested to Amos “ItsMyMoment” Hines who is playing in his final season in the Venice Basketball League. The seasoned veteran, mostly notorious for his passionate and relentless defense, contributed on the offensive side in a huge way. With time winding down, it really was his moment as he clutched two victory-solidifying free throws. Hines’ veteran leadership is one of the reasons why P4E has been such a successful team this summer. Thank you for your loyalty and inspiration to the basketball community!

P4E advances to 5-1 and appears to have their sites on the #1 seed. Futuremood drops to 2-4 as we approach the playoffs.

Playing 4 Eternity rose to the occasion with a 65-60 win over Papa & Barkley.

Playing 4 Eternity clinched their spot as the #1 seed in the playoffs. They came out aggressive and gave Buddha Boyd a chance to establish himself early. Papa & Barkley was missing a few of their star players but still played excellent team ball to stay in the game. P4E led 33-30 at halftime.

Coming out of halftime the game remained tight. The short-handed Papa & Barkley managed to never let things get out of control but ultimately didn’t have enough to upset P4E. Buddha Boyd scored 25 points and grabbed 11 rebounds and was named Player of the Game.

Playing 4 Eternity finishes the season as 6-1 and the number 1 seed heading into playoffs. Papa & Barkley drop to 2-4 with one more game left to play in the season.

Sunblock on Wheels got things back on track right before the playoffs – winning their second game in a row against Team Fairplay 73-69.

Sunblock got off to an impressive start on the offensive and defensive end. A.J. “The Chosen One” Harris controlled the tempo and distributed the rock while Big Mike, also known as “Block Party,” anchored the middle on defense. Sunblock led at halftime 40-29.

Kwame “The Hitman” Alexander joined Team FairPlay in the second half and helped cut down Sunblock’s lead. He scored 13 points and grabbed 10 rebounds. Player of the Game Jon “Kake Show” Kaker’s energy created multiple second chance opportunities for Sunblock. He finished with 17 points, 10 rebounds, and 3 blocks.

Sunblock, now 5-2,  advances towards the playoffs. Fairplay falls to 3-3 with another game left to play.

Futuremood clinched their playoff berth with a 66-59 victory over  Project Backboard.

The first half of the game was very dominant for Project Backboard as they lead 28-21 going into the second half. Farnold “The Haitian Diplomat” did all he could to give Project Backboard a crucial win for Playoff seeding but Futuremood had too many weapons as 4 players had 10 points or more.

On top of that, Player of the game Kenny Barnes scored 21 points, grabbed 7 boards and 3 steals.  Futuremood record improves to 3-4 as they gear towards the playoffs. Project Backboard drops to 2-4 with another game still to play.

Led by Nick “Young Mouth” Hynes, Beach Boys led 40-33 at halftime with no signs of stopping; however, Vince “Body Snatcher” Camper seriously took over as not one person was capable of guarding his insanely strong post game.

Shadow Hill’s impressive performance earned them a big win  84-73 over Dompen Green Lights. This game was special as last year’s MVP, JBully, and the front-runner for this year’s MVP, Norf Kakalaki, went head to head for the first time of the year.

Norf adjusted his style of play this week as he tallied 6 assists which is why Shadow Hill led 36-35 at halftime. JBully and White Iverson did not shy away from the competition as they combined for 49 points.

That effort was not enough, however, as JuJu “Built Different” Ducree Player of the Game 32 points, 17 rebounds and 5 blocks.

Dom Pen was led by Brandon “Neighborhood Crook” Townes who showed off his umatched court vision with 19 points and 5 assists.

Project Backboard really played together even more so as all 10 players on their team scored at least a bucket. Player of the game Nick Ball recorded 16 points, 6 rebounds and 2 assists.

Project Backboard now stands at 3-4 headed towards the playoffs. The reigning champions Dompen finished the season with a 3-4 record as well.

Similar to most games this season, Ballers Anonymous led at the half 37-35, but lost steam as the game progressed.

Julian Newman showed off his next level dribbling ability as he dropped 20 in his first VBL outing.

Shadow Hill led 57-54 at half with an unreal amount of highlights.

Andy Cleaves, last year’s VBL All Star, came back to the beach to casually earn Player of the Game with 37 points, 12 rebounds, and 5 assists. This kid can play!

Fairplay came up huge 59-56 in an OT thriller against Born X Raised/ Beach Boys. This game went down to the literal millisecond as Patrick “Cleveland Show” Cleveland pulled up from the opposing 3-point line to win the game.

In what seemed to be a blowout, Beach Boys led 32-29 at halftime. Young Mouth recorded another 30+ point outing.

Patrick “Cleveland Show” Cleveland was the Player of the Game for not only his halfcourt buzzer beater but also his 15 points, 4 rebounds and 2 assists.

Fairplay heads into playoffs with a 4-3 record while Beach Boys fall to 3-4.

This VBL summer has been nuts and the community is as strong as ever. At this point, any team could win the championship, so follow @veniceball to follow along with the journey.