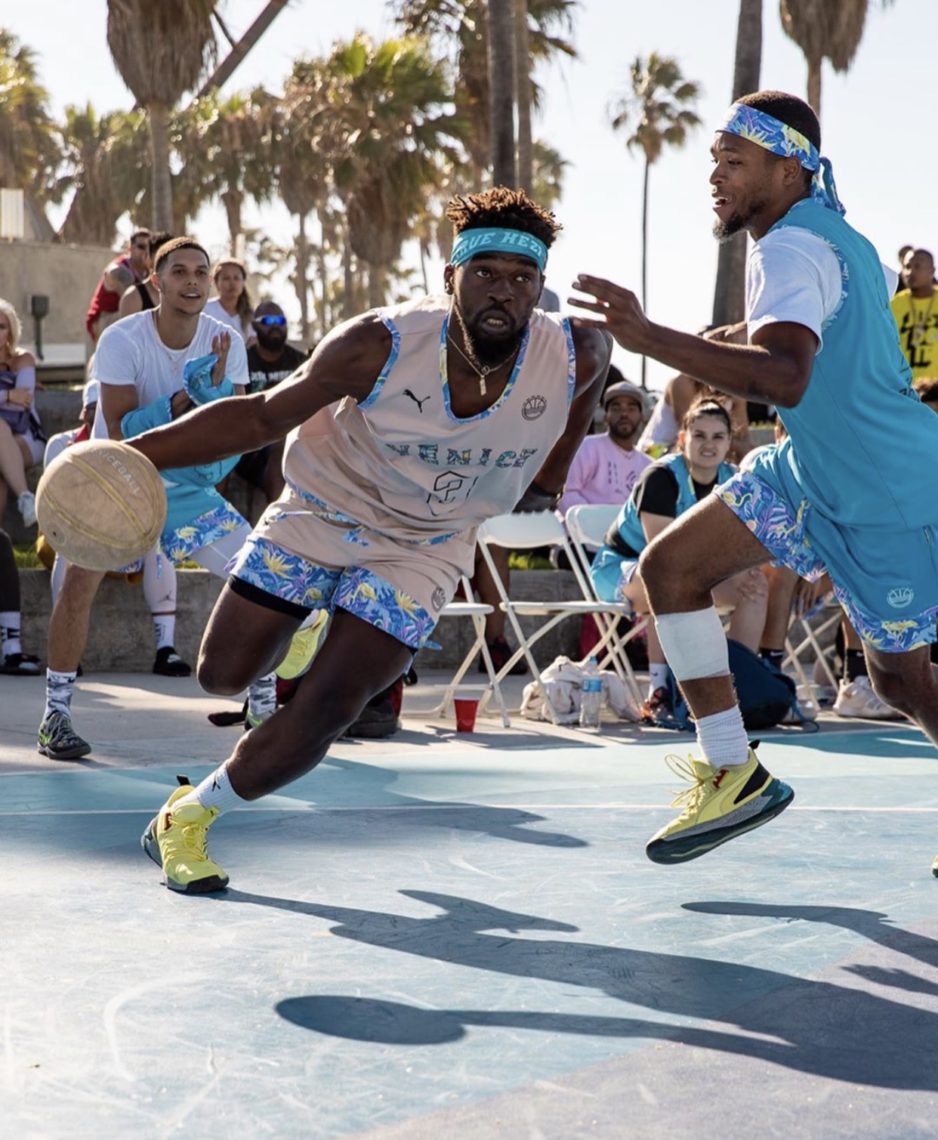 It most definitely was a rumble in the Jungle at Hooper’s Paradise for week 5 of the Venice Basketball League.

Futuremood defeated Ballers Anonymous 83-79 to secure their first win of the season. Both teams had an unsuccessful 4th week so each came into week 5 in search of their first victory.

Behind their star Chris Staples, Ballers Anonymous came out of the gates poised and ready. Futuremood began the game lethargic and stagnant. As their deficit grew, Futuremood looked around for a spark. Garrick “The Dreamchaser” Wilson entered the game and became just that. He relentlessly scored basket after basket. Wilson instantly shifted the momentum for Futuremood and helped cut their trail down to 6. The score was 39-33 at halftime.

In the second half, “The Dreamchaser” continued his attack. He scored in a variety of ways- nailing open three-point attempts as well as penetrating the defense to the rack. He finished with a season high of 34 points and grabbed 10 rebounds. Ballers Anonymous maintained their excellent play though. For the first time in the season, they appeared to play as a team. They definitely have something to build off of. Multiple members finished in double figures but they let their first win slip away from them at the end.

Garrick “The Dreamchaser” Wilson earned himself Player of the Game and Player of the Week honors as he helped Futuremood grab their first victory. Their record now stands at 1-3 and Ballers Anonymous is 0-5.

Team Fairplay bounced back from a disappointing performance last week with a 65-59 victory over Papa & Barkley.

Basketball legend Patrick Robinson also known as “Pat The Roc” made a special appearance with Papa & Barkley after hosting the KVBL. The former Harlem Globetrotter and AND1 Streetballer wasted no time reminding folks why he earned his nickname of “Pat The Roc”. He marveled the crowd as he danced around defenders. Papa & Barkley held a 33-28 advantage over Team Fairplay at halftime.

The Dynamic duo of Brandon “Big Baby” Jamar and “JT Money” helped Team Fairplay absolutely takeover the second half. “JT Money” controlled the pace and created plays for himself and others while “Big Baby” dominated the paint by grabbing rebounds and scoring on second chance attempts. “Big Baby” was named the Player of the Game – he dropped 20 points and grabbed 10 boards. JT Money” scored 14 points and dished out 6 assists. Their contributions helped Team Fairplay take the lead and seal the victory over Papa & Barkley.

Honorable Mention – Pat The Roc finished with 20 points and Amin “Knowwhatamin” finished with 16 and 5 assists for Papa & Barkley.

Both Team Fairplay and Papa & Barkley’s records are tied up at 2-2 going into week 6.

Los Fearless’s size disrupted Sunblock and helped them jump out to an early lead. They were able to deter shot attempts and limit the second chance opportunities in the paint.  Sunblock struggled to establish any rhythm. They fell behind early and trailed 34-43 at halftime.

Marcus “The Coroner” Bell controlled the interior for Los Fearless. He scored 24 points and grabbed 10 rebounds and was named Player of the Game. Brandon “The Mute” Fields and A.J. “The Chosen One” Harris gave it their best attempt for Sunblock. “The Mute” finished with 19 points and “The Chosen One” finished with 20. Los Fearless outrebounded Sunblock 30-12 and helped Los Fearless maintain their lead throughout the second half.

Los Fearless advances to 3-1 and Sunblock on wheels falls to 3-2.

The reigning champions have had things clicking at the right time. The Dompen Green Lights now have won three in a row with their upset against undefeated Playing 4 Eternity 83-70 in a dominant performance.

With both teams knowing how important this game was, neither wanted to give a single inch. Both teams battled neck and neck in the first half. The Green Lights scored on easy transition opportunities and P4E  Cha Cha Matcha scored on good ball movement and excellent shooting. The game remained close throughout the first half and P4E led 42-40 at halftime.

In a highly physical game, Jarell “Bama” Tate bullied his way through opponents as The Green Lights took command in the second half. They calmed down and played excellent defense. They were able to quickly take the lead and push it to double figures. P4E struggled shooting in the second half and turned the ball over frequently, making it hard to come back from the double-digit deficit.

Jarell “Bama” Tate was named Player of the Game for the second week in a row with 20 points, 8 rebounds and 4 assists.

In the most exciting game of the day, Shadow Hill defeated Bristol Studio 61-60in an overtime thriller.

Shadow Hill, led by Ryan “Norf Kakalaki” Carter and emerging star Julien Ducree, trailed early in the first half. Bristol Studio played stellar defense on “Norf Kakalaki” in the first half. They frustrated the Shadow Hill star with their bump and grind defense. “Dolphin Boy” carried Bristol Studio offensively with 25 points and helped them take a 33-28 lead into the intermission.

With his fellow star struggling with foul trouble, Julien Ducree seized the opportunity. The former Dixie State big man took charge. Ducree had his way with whoever was guarding him and you can hear him yelling to the team to feed him. He was a force in the paint and knocked down a few open jumpers also. “Dolphin Boy” and Bristol Studio did not back down though. “Dolphin Boy” rose to the occasion and knocked down big shot after big shot and help send the game into overtime.

“Norf Kakalaki” fouled out late in the 4th quater for Shadow Hill, so Ducree had to put the squad on his back. And that’s exactly what the big fella did. He made the game-tying basket and won the game with a free throw as time expired. Ducree finished with 26 points and 12 rebounds and was named the Player of the Game.

The schedule for week 6 is: