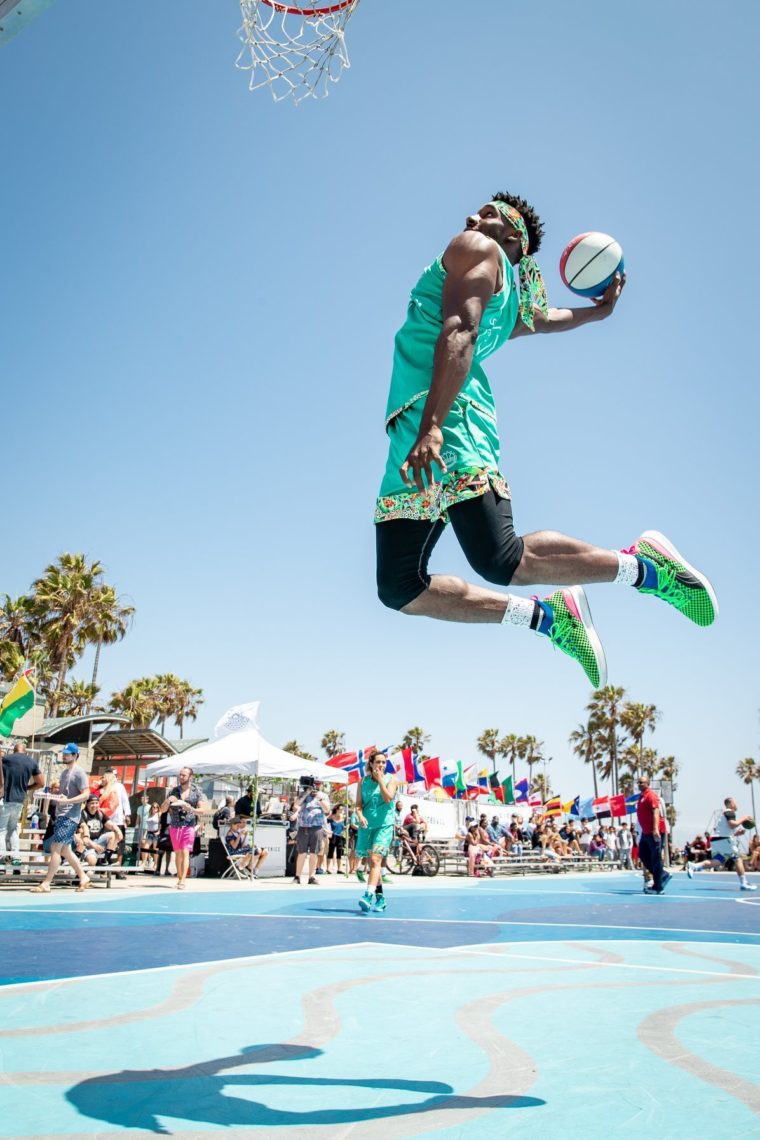 Back to the beach

The VBL returned home to Venice Beach for an action-packed double-header for Week 4. After being on the road for two weeks, the VBL decided to host games Saturday AND Sunday at Hooper’s Paradise. It was a weekend filled with exhilarating, high-flying dunks and bodies snatched from left to right.

Dj Punch provided the west coast flavor that intensified the level of play. The Master of Ceremonies, Mouthpiece, provided the commentary that kept the audience of a few thousand in constant uproar. The VBL merchandise table transformed spectators into players with the new jerseys, and the food trucks served an immaculate taste of Venice.

The VBL was back at Venice and in full effect.

Saturday: Hooper’s Paradise hosted four games that showcased some of the VBL’s premiere talent. Then Sunday for “Go Hoop Day” the VBL linked with The King of Underdogs to transform Hooper’s Paradise into a battleground for the “Hood Comes Home” 1 vs 1 basketball tournament. Players battled for a chance to win a grand prize of $2,000. Los Angeles Laker Kyle Kuzma watched courtside as a special guest and streetball extraordinaire Bone Collector participated as a special guest player.

Sheldon “Juggernaut” Bailey took home the grand prize and proved that he was the king of the court.

After the tournament concluded and a king was crowned, the VBL hosted games 5 and 6 to cap off national Go Hoop Day.

The Dompen Green Lights welcomed back last season’s MVP Jarell “Bama” Tate in game one. In a dominant performance, they defeated Future Mood 88-57.

Dompen pulled out to a remarkable start and never looked back. “Bama”, the Canadian League Pro, messed around and almost got a triple double with 30 points, 12 rebounds, and 8 assists. The Green Lights took an impressive 38-14 lead at halftime over Future Mood.

Future Mood woes continued as they were never capable of stringing together a run of stops and scores to cut the deficit. The reigning champs kept their foot on the gas and finished the game with an aerial display, which was highlighted by a sensational 360 slam from Bama.

Dompen now moves on to 2-1 heading into Week 5 and Future Mood now stands at 0-3 as they look forward to next week to hopefully grab their first win of the season.

The game began with neither team giving up an inch. Los Fearless took command early by grabbing almost every rebound. TJ “The Steroid Ambassador” nearly recorded a double-double in the first half. Fairplay and Bionic Man would not go away easily as both squads ended the first half tied up 24-24.

Los Fearless size finally wore down Fairplay as the game slowed down. It appeared as Fairplay just ran out of gas. “The Steroid Ambassador” earned the Player of the Game honors because of a double-double – 14 points and a season high 17 rebounds.

Los Fearless now advances to 2-1 and Fairplay drops to 1-2  going into week 5 of the season.

Beach Boys’ newest addition Nick “Young Mouth” Hynes had an unforgettable debut. He poured in 26 points and knocked down four 3-point shots. He provided an immediate impact and helped his team take a surprising 32-26 lead over Project Backboard into the halftime break.

The Beach Boys extended their lead early in the second half with outside shooting. Marcus “The Devourer” and Farnold “Code Name” Degand helped Project Backboard remain in striking distance with 12 a piece. “Young Mouth” continued his iso onslaught, destroying defender after defender. PB struggled to make stops and did not resemble the same team that started off the season 2-0.

Nick “Young Mouth” Hynes was named The Player of the Game.

Both teams now stand at 2-2 and look forward to next week for the opportunity to improve their records.

Ryan “Norf Kakalaki” Carter and Shadow Hill went down to the wire versus Chris Staples and Ballers Anonymous.

“Norf Kakalaki” came out of the gates blazing to start the game. He torched every defender Ballers Anonymous sent his direction. When asked about his hot start he stated “I was trying to outscore Bama. That’s my guy, we’re both southern guys, I had seen what he did earlier and that’s the last year’s MVP and I’m going to be this year’s MVP so I made it a point to try to outdo him. It’s just friendly competition.”

Chris Staples’ attack on the basket was relentless throughout the first half. He caught a body with a ferocious one-handed tomahawk slam that broke a screw attached to the rim. Unfortunately, Ballers Anonymous still trailed 25-42 at halftime.

Player of the Game “Norf Kakalaki” followed through on his word and racked up 33 points, outscoring Bama by 3. His 33-point contribution aided Shadow Hill as they withstood the surge from Ballers Anonymous. Ballers Anonymous clawed their way back into the game in search for their first victory but came up just short in the closing seconds.

After securing their first victory last week, Bristol Studio looked to keep the momentum going into their matchup against Papa & Barkley. Papa and Barkley shut it all down as they defeated Bristol Studio 63-61.

Julian Caldwell proved to be a walking bucket for Papa & Barkley. He scored time after time throughout the first half. Bristol Studios started the game sluggish and was not able to establish any rhythm. Due to that they trailed 41-20at halftime.

Bristol Studio bounced back in the second half. John Horowitz and Steven Brundage quarterbacked the comeback. Horowitz finished with 16 points and Brundage finished with 18 points; however, Papa & Barkley never seemed rattled by it. Backed with experience, they found a way to weather the storm and maintain their composure. Caldwell and Papa & Barkley closed out the game in the final seconds.

Julian Caldwell was named player of the game and ended with 21 points and 6 rebounds.

In the highly competitive contest between the last two undefeated teams, someone had to take home their first loss. Sunblock on wheels suffered their first defeat of the season 68-67 at the hands of Playing 4 Eternity.

P4E had themselves a block party. Former G-league All-Star Zach Andrews controlled the paint with 4 block shots and a thunderous slam that broke out pandemonium. NFL Hall Of Famer and VBL Veteran Terell Owens suited up with Sunblock. Aj “The Chosen One” Harris nailed consecutive 3-pointers to cut the lead down just as P4E started to gain momentum. P4E took a 36-31lead into halftime.

P4E continued to turn defense into offense in the second half and tallied up a lot of fast break points. Dushone “L.O.B” Brown was the beneficiary of most of the fast breaks. He threw down lob after lob on his way to a 21 point performance. Sunblock remained close the entire time. Brandon “The Mute” Fields’ crafty scoring kept them in the game each time P4E went on a run.

In the final seconds Sunblock trailed by 6. T.O drilled a wide open 3-pointer that helped cut the lead to just three. Up by three, P4E turned the ball over, giving it back to Sunblock but in transition. “The Mute” took an easily layup instead of the three in transition as time expired.

Playing 4 Eternity escaped the battle of the Juggernauts and came out victorious. They now stand as the only undefeated team in the league at 4-0 and the clear cut #1 team. Dushone “L.O.B” Brown was named the Player of the game. Sunblock’s record now moves to 3-1 as they look to get back on track in week 5.

To conclude week 4, the return to the beach was groundbreaking. The highlight-filled weekend gave spectators a glimpse of some of the best basketball that the VBL has to offer.

How will the VBL get better next week heading into week 5? Stay tuned because each week of the VBL calls for something new.

The schedule for next week is listed below but please check out the @veniceball Instagram account for more information and entertainment.

1:15pm – FairPlay vs Papa and Barkley