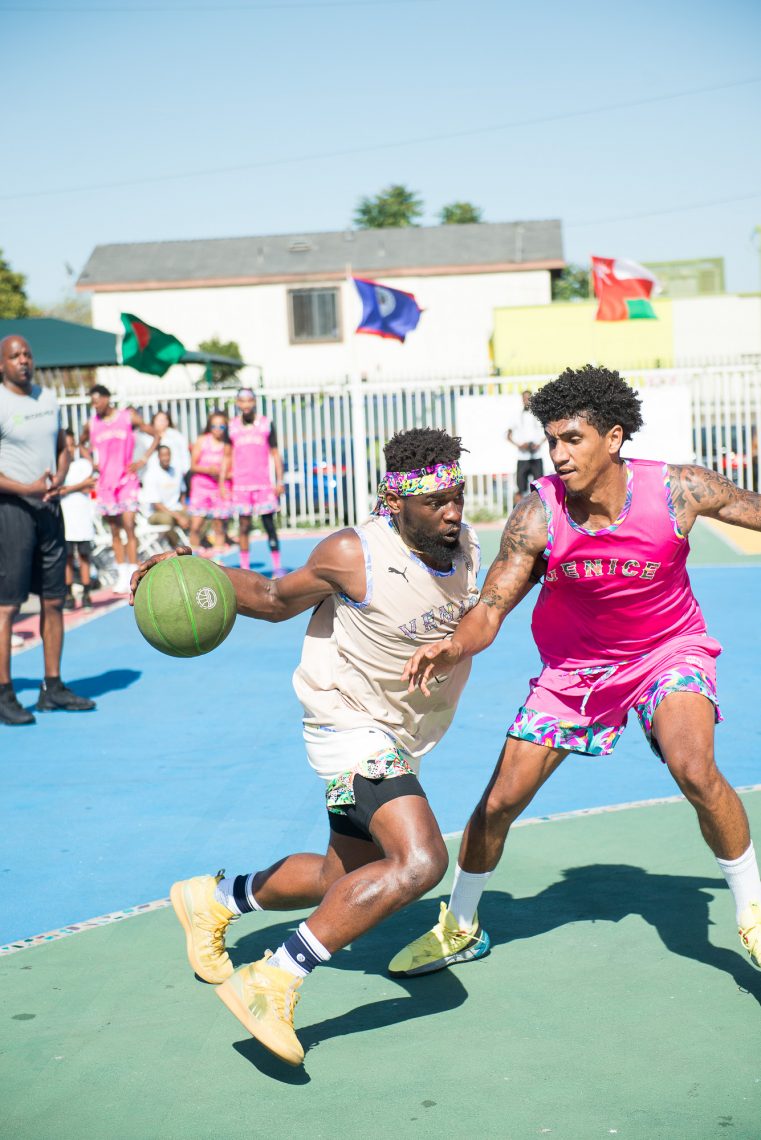 The VBL took its elite talent from Venice Beach to Watts, CA this past Sunday. In a return to the famous location where originally “White Men Can’t Jump” was filmed and VENICEBALL founder, Nick Ansom, helped renovate. VBL hosted the week 2 games at its sister court “Watts Oasis,” located at the Saint John’s United Methodist Church in Watts in an effort to give back to the community.

The VBL brought good vibes and the sun from the beach to put on an absolute spectacle for the spectators who came out to enjoy some high-flying and fast-paced basketball.

Sounds from DJ Punch and jokes from the Master of Ceremony “Mouthpiece” brought a taste of Venice to the inner city of Los Angeles.

Although many of players come from different backgrounds and cultural ideologies, Nick believes basketball brings everyone together, so Pastor Larry Dozier blessed the players and the court with a thoughtful prayer.

Both coming off of victories from week one, Project Backboard started off the day with a (51-41) win over Papa & Barley. Led by the legendary streetballer and dribbling extraordinaire “Sikwitit” and Farnold “The Haitian Diplomat” Degand, Project Backboard was ready to put on a show in Watts.

PB took control early in the game getting to the rim with ease – resulting in many transition layups which led to a 31-23 lead into halftime over Papa & Barley.

The game remained close in the second half with Amin aka “Know What Amin” getting hot and mounting the comeback for Papa & Barley, finishing with 12 points . But the player of the game “The Haitain Diplomat” was not going to allow that to happen. He kept applying pressure and getting to the basket. He finished with 17 points, 9 rebounds and 4 assists.

With the addition of the big man Kwame “The Hitman” Alexander, Sunblock looked even more impressive than last week. He established himself as a dominant force early in the inside, helping Sunblock take a 30-26 lead into halftime.

Ballers Anonymous showcased their leaping abilities for the second week in a row. Anthony Hamilton Jr. caught his second body of the VBL season. Hamilton dunked on “The Chosen One” forcing him to take a seat for two minutes.

The player of the game, Brandon “The Mute” Fields absolutely took over in the second half for Sunblock. The 5-time VBL champion and 4-time VBL MVP finished the game with 19 points, 7 rebounds and 3 assists. When asked where he ranks now amongst the league’s best, the vet responded, “I feel like I’m still #1 to tell you the truth, like can’t no one stop me, there’s a lot of young guys that think they could but I got too much for them”.

In the most anticipated game of the day, last week’s player of the week Ryan “Norf Kakalaki” Carter and Shadow Hill took on Adam “The Flash” Stanford and Cha Cha Matcha/P4E. With both teams being stacked, the fans  knew they were in for a good one.

P4E moved to 2-0 as they defeated Shadow Hill 92-73 behind 22 points from both “The Flash and from Tristian “T-Will” Wilson.

P4E controlled the tempo for most of the game. They scored easy dunks and layups out on the break the entire game and held a 36-28 lead going into halftime.

P4E played excellent defense on “Norf Kakalaki” holding him to only 23 points, on very difficult and contested shot attempts.

In what would be his last game of the very young VBL season, due to his pro season in Thailand beginning, “The Flash” did not disappoint – earning himself player of the game honors for the second week straight. He seemed to dunk everything that came his way.  Stanford spoke briefly after the game about the VBL and the

opportunities it has provided: “The VBL helped me a lot, getting the chance to network with Nick (Nick Ansom) and meeting people like Shaq and Shareef O’Neal”.

The Beach Boys came out the gates swinging in the first half – feeding off of the energy from the high motor Manuel “Antennas” Brown, the former El Salvador Pro, who had two big dunks in the first half. Future Mood battled back from an early double-digit deficit to make things interesting and trailed by only 8 points (31-23) going into halftime.

Garrick Wilson for Future Mood dropped 20 points and willed his squad on both the offensive and defensive end. He also recorded two monster blocks to go along with a few jaw-dropping dunks to keep Future Mood in the game.

“Antennas”  was named player of the game after scoring 22 points and grabbing 8 rebounds to help The Beach Boys get the win.

Bristol Studios capped off our evening against Team Fairplay.  Fairplay grabbed their first win of the season with a 59-54 victory.

Rookie Brian Mayfield came out aggressive for Bristol Studios. The guard showed his touch with midrange jumpers and got to the rim a few times to help Bristol Studios take a 30-22 lead into halftime over Team Fairplay.

Fairplay flipped the switch in the second half. It was an overall good team performance for them. Everyone contributed but a few standouts were “JT Money” and “Bionic Man” who shared the player of the game honors. “Bionic Man” had a pair of electrifying dunks which helped Fairplay gain the momentum along with the victory against Bristol Studios.

Honorable mention: Brian Mayfield had another 23 point performance after dropping 23 last week in their loss to Project Backboard.

As Week 2 comes to a close, it’s more than safe to say it was another successful week in the VBL. There was good competitive competition through the day with a few teams displaying they are a force to be reckoned with as some look to go 3-0 this Sunday. Then on the other side, there are a few teams that are still ironing out the wrinkles and trying to figure it out.

Next week the VBL is headed back home to Hooper’s Paradise at Venice Beach. Tip-off begins around noon and the schedule is TBD. Please stay tuned and check @veniceball for updates.