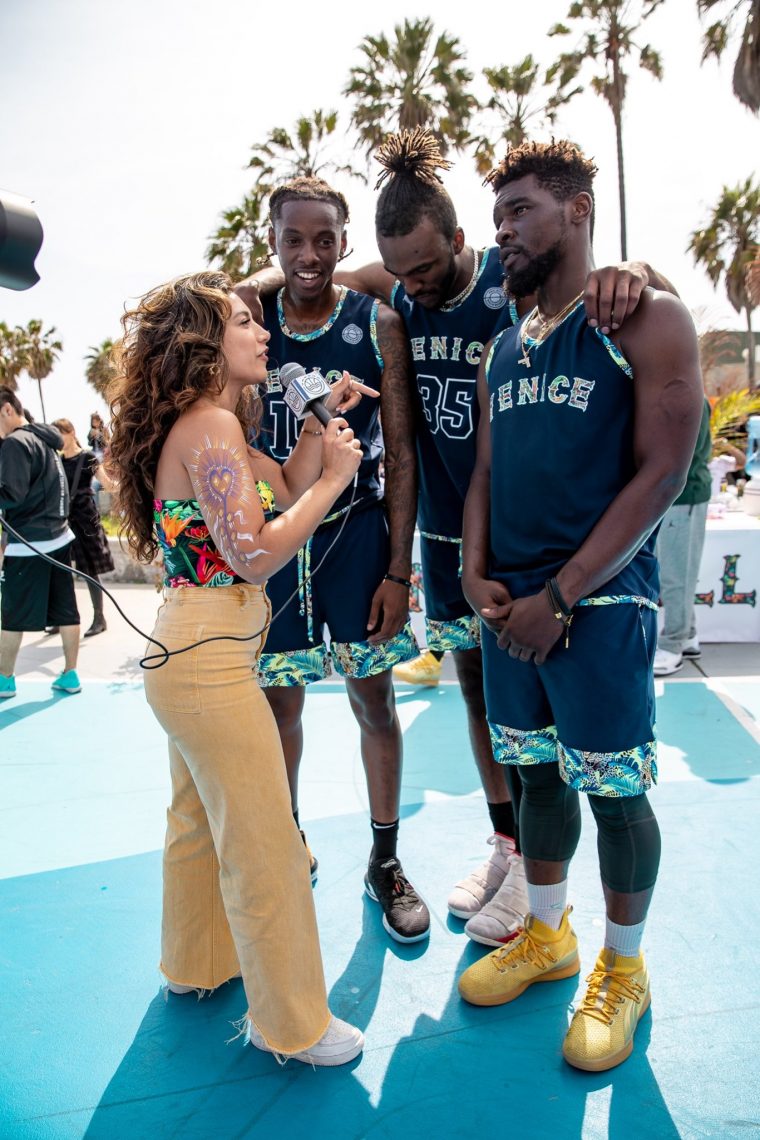 With the VBL newly partnering with Puma for its 13th season, the atmosphere at Hooper’s Paradise was electric.

The players sported their new Venice Zoo uniform, repeatedly described as “basketball couture” for its one of a kind cut & sew high end sustainable fabric with jungle prints – handcrafted here in Los Angeles. 1,000’s of spectators swarmed the sidelines and bleachers to witness the VBL’s elite talent go at it.

The contributions off the court pulled the event together: DJ Punch intensified the level of play with emphatic west coast vibes, the vendors and food trucks allowed for no interruption viewing, and the VBL merchandise table sold the experience with the new jerseys and even throwback apparel.

The Master of Ceremony spotlighted Mouthpiece aka “The Voice of Venice Beach” where no man or woman was safe from his quick-witted jabs that even the players couldn’t help but laugh. This must’ve been a drastic ego transition from Media Day at the VBL Club House prior to play where the athletes got geared up and flicked up.

Despite the different backgrounds and beliefs of the athletes in the VBL, Founder of VENICEBALL Nick Ansom believes we are all family. With that being said, he welcomed everyone to the “jungle” as both teams gathered for a prayer of blessing and gratitude – led by Don Weyrick, Minister and Coach for Playing For Eternity.

Playing 4 Eternity (P4E) kicked off the festivities with a 70-62 victory against Team Fairplay. Led by Coach Don, P4E came out the gates poised and ready for battle with a team stacked with young stars versus Team Fairplay led by Coach Ike Bates.

The first half jumped off to a fast pace with both teams flying up and down the court. It was an electrifying first half with stellar plays from Adam “The Flash” Stanford, a professional in Denmark. Stanford would go on to be the Player of the Game.

Team FairPlay held the lead going into halftime (30-28) led by D.Wash and Big Baby. However, P4E received a boost to start the second half with the addition of last season’s Rookie of the year and MVP candidate Mark Anthony. He instantly came in and showed why he was one of the VBL’s best last season. They also received a good showing from their rookie draft pick Tyrone “TJ” Jones, who blessed the crowd with a crowd erupting one-handed dunk.

After falling short in the championship last season, Papa & Barkley thought it’d be best that they welcome the VBL’s newest addition Ballers Anonymousto their first taste of defeat: (53-52). Most viewed this as an upset as Ballers Anonymous is headlined by Dunk League legend, Chris Staples, another high flyer Anthony Hamilton Jr., and Overtime Sam – eagerly visiting the VBL from NYC.

Chris Staples immediately surprised the audience as he proved himself to be more than a dunker as he drained back-to-back 3 pointers. Once he solidified his title as a shooter, he went back to blessing the league with an earth-quaking 1hand slam. But he didn’t stop there… Staples dish a behind the back dime to Hamilton Jr. for a two hand poster over opposing big man. Everyone knows the rules: You get yammed on, you take a seat! Hence why their big man was benched twiced during the game.

Julian Caldwell led Papa & Barkley with 14 points and timely scoring, he seemed to score for his squad whenever they needed an answer. Because of this, Caldwell was named Player of the Game.

Project Backboard vs Bristol Studios resulted in a PB win (84-74). Project Backboard starred Street Ball Legend “Sikwitit,” Trappie Smoov, and Player of the Week: Ryan “Norf Kakalaki” Carter who many predict to be the 2019 VBL MVP.

Literally dancing with the ball and around his opponents Norf Kakalaki, the guard from North Carolina, put on an absolute spectacle. He proved to be unguardable with 33 points and 7 assists.

The scary part is that he is just getting started. Recently, Carter won MVP in another league while averaging 48pts with a 70pt season high. Carter states “This summer is the takeover. I’m from North Carolina. I’m here to take over and snatch everything that’s mines, including the MVP and the Championship”.

Bristol Studios never went down easy though. The game was tied up at halftime 39-39.

Streetball Legend “Sik wit it” showcased his handles reminding everyone that he really is sick wit it. Trappie Smoov dropped 18 points, grabbed 11 boards and had two block shots. On the other end, LJ from Bristol Studios threw down a monstrous two-handed slam

Game Four took us back to the early years of the VBL. The legendary “DB the MC” made his return to the Venice Ball Courts to narrate the Sunblock vs The Beach Boys battle.

“The Chosen One” and “Mr. Automatic” of Sunblock defeated the highly anticipated Beach Boys (78-58). The Beach Boys are sponsored by Born n’ Raised, a local Venice clothing company, because the members of the team consist of friends and hoopers that eat, sleep, and breath Venice ball.

The young guns of The Beach Boys – Amir and Hassan Stephens – were dominating with easy access to the hoop and couple huge dunks.

But as the saying goes, you can’t put a price on experience. Sunblock eventually put their foot on the gas and finished the game with a 20-point victory

Donald “I do it for my my Moma” Lee was named the player of the game with 18 points.

To save the best for last or at least that’s what they say. Game 5 featured the reigning VBL champions Dompen Green Lights vs Los Fearless. However, Dom Pen was dethroned (60-50)in the most physical and chippy game of the day.

The game remained tight throughout until tempers got out of hand. The drama took some of the game’s top players out of the game leading to the Los Fearless lead extending until the final whistle.

Overall, the VBL Tip Off was a seamless success – from the high-flyers and head-turning speed on the court to the multi-cultural food trucks and vendors

In addition, the audience was gifted with a surprise performance from the “Princess of Compton” Azjah, who performed her single “Time for it.”

Next week the VBL is heading to Watts to play in the Watts Oasis with tip-off beginning at noon and the schedule TBD. Check @veniceball for updates

Written and Edited by: Louis Murray and DeAngelo Scruggs

One thought on “Season 13 VBL Tip Off Recap”