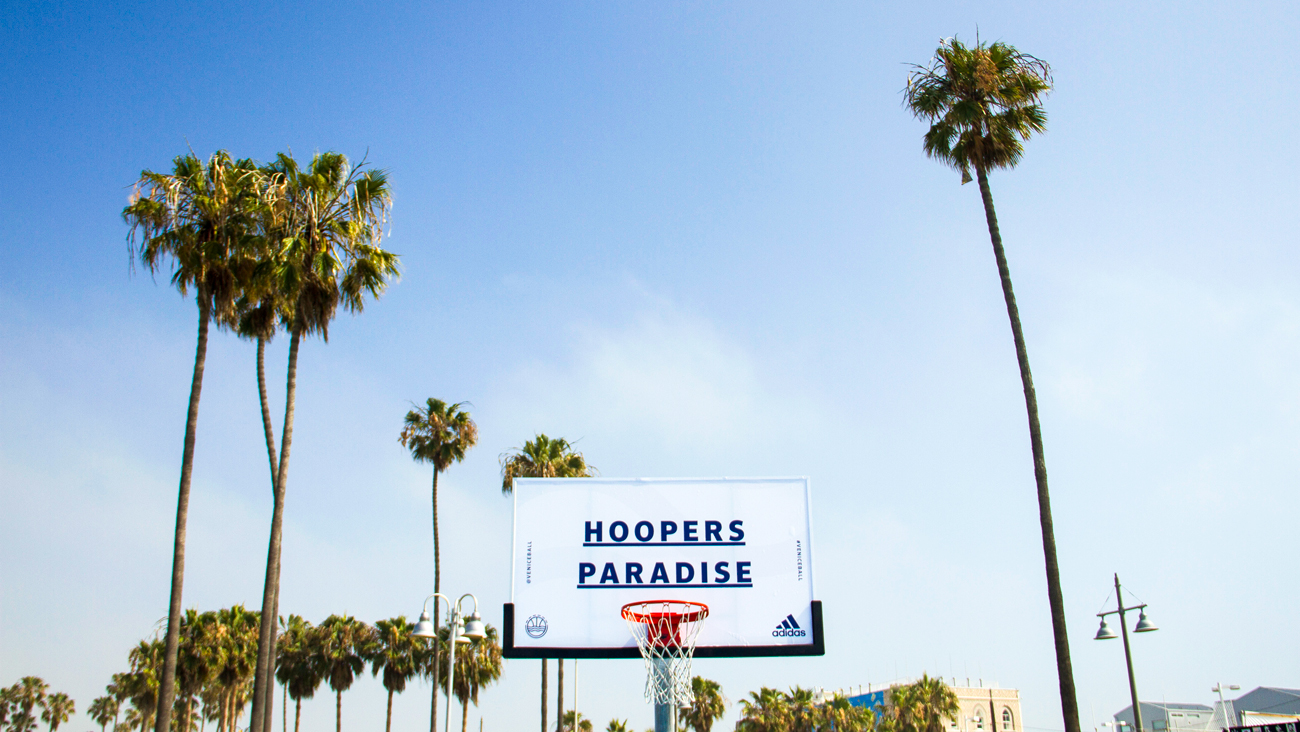 The Venice Basketball League (“VBL”) celebrated Father’s Day this past Sunday with a full schedule of 6 games and a spirited crowd that soaked up the sizzling sun and rim-rattling dunks in VBL’s third week of action. The day started as it always does, with a basketball skills and healthy living camp for children, an initiative of the Kids Venice Basketball League (“KVBL”) otherwise known as Church of Hoops. This week, the kids worked on their vert with NBA Strength and Conditioning Coach  Sebastien Morin (ZeBeardedCoach) , Van Girard pro-athlete and coach and special guest, 2016 NBA G-League Dunk Contest Champion John Jordan.

Jordan is a champ in another respect – in April of this year he won the 2017 G-League championship with his Toronto Raptors 905 squad, posting 10 points, 4 rebounds, and 5 assists per game in the team’s playoff run.

The fans on-hand for VBL’s third week of action in 2017 were treated to a special guest appearance by Jordan, who joined the Most Hated Players (MHP) team (1-2) to take on the undefeated Pro Shot West squad (3-0).

Most Hated Players No Match for Pro-Shot West

Unfortunately, the Most Hated Players didn’t quite bring championship-caliber play to the tough match-up. Pro-Shot West jumped out of the gate on a mission, speeding to a 14-0 lead behind 8 points from team captain and player of the game “Meezy”. In fact, MHP didn’t sink their first bucket until almost 5 minutes into the 1st quarter, which ended at an ugly 21-2 deficit for Nick Young’s MHP.

A 13-0 run for MHP to start the second quarter, sparked by 8 points from Jordan, cut the difference to 6, and by halftime, the score was 34-27 in favor of Pro Shot West. MHP expected to get a lift in the second half as their team captain, AJ Harris, aka “The Chosen One”, chose to show up for the game a little late. Both squads battled hard in the third and the lead stayed at 7 going into the 4th.

But Pro Shot West’s sweltering defense and impeccably played team basketball proved to be too much to handle for the Most Hated Players, who went on to lose by 15.

I caught up with John Jordan after the game, who stayed positive despite the loss.

“I had a lot of fun,” he said of his first-time VBL experience. “Great atmosphere, great people, great community, the weather’s good, there are good basketball players.”

And like a true champion, he showed nothing but respect for his competition, the undefeated Pro Shot West: “They’re a good team – a lot of help defense and they play together, so any time you can do that you’re going to win games.

Jordan gave praise all around, lauding the “beautiful” VBL court, which was recently rejuvenated as part of the Build Courts Not Walls campaign.

And what’s next for this G-League champ?

“Get home, get healed up, and get ready for the NBA Summer League,” always keeping in mind his “main goal” of landing that coveted NBA contract.

“I’m here, I’m ready, and I’m working, the VBL guys have been amazing to me during my stay” he said with a smile.

Hopefully some of that championship attitude will rub off on the Most Hated Players squad!

In other news around the league, the Project Backboard squad (2-0), in their rookie season, became the first VBL team to break the century mark, beating Metta World Peace’s Panda’s Friend team (0-3), 101-89. The team is sponsored by basketball non-profit Project Backboard, the largest donor so far to the Build Courts Not Walls effort.

The VBL season is officially in full swing and we have a kids camps starting during the week now, click here for more info– join us next Sunday to see another round of all-star beach basketball from the finest talent Southern California has to offer!