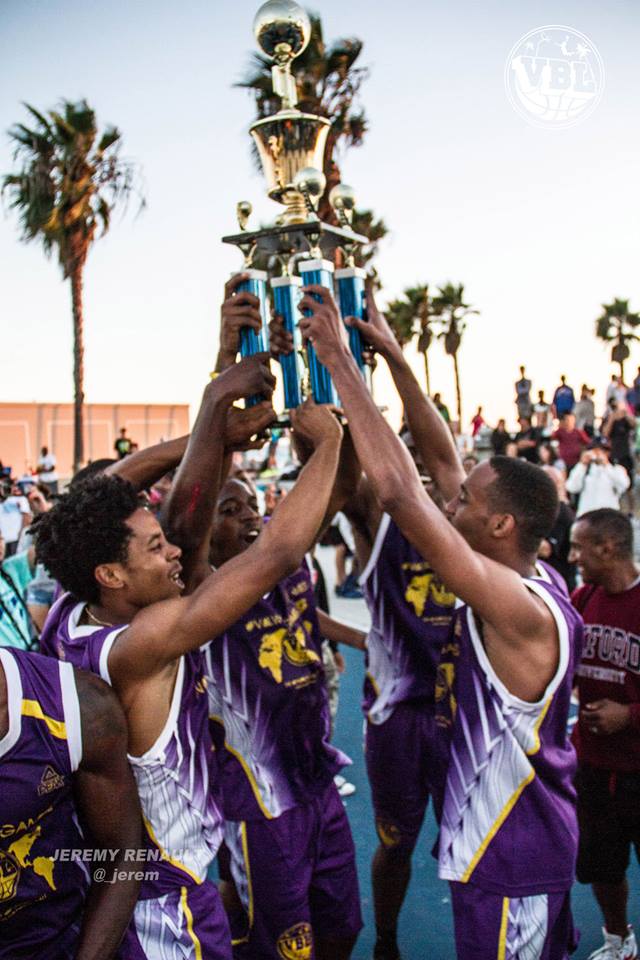 9/23/14 VENICE, CA – #VBLworldGames to 21pts no FREE Throws all for the pride and love of the game.
Team Hall of Fame (@halloffameltd) pulled off their ‘Redemption Game’ victory at the streetball Olympics in Venice Beach over the weekend ending Brandlblack’s (@brandblackallstars) 15 game win streak and undefeated start at the VBL. Teams from Qatar, India, France, Mexico, Japan, the Philippines and across the states starred in a drama and highlight filled tournament.
Hall of Fame set themselves up with a more difficult road to the championship than they would have liked, going 0-2 in pool play. Three of their star players, Deshawn ‘Evolution’ Stephens (@destephens23) out of SD State, AJ Stewart (@aj_stew15) out of Kentucky and HOF team captain Justin Archie (@yahdeeteezy), were attending the LA D Fenders invite only tryout on Saturday.
The story seemed to right itself on Sunday, with Hall of Fame rocking the LA Lakers’ purple and gold jerseys sponsored by Peak Sports USA. With a full squad and Hall of Fame reps in attendance for support, they took down two of the top seeded teams from Saturday including Omni, representing Team Qatar and Tri-State’s Finest from New York. The Tri-State ‘Goons’ had a strong tournament, led by coach Dribble2much (@dribble2much), who is best known for his handles and training some of the top players in the game such as Kevin Durant. Tri-State’s standout players were Bronx-born Mani Love (@manilove102) of the Court Kingz (@court_kingz) paired with word- renowned dunker and Harlem Globetrotter, NBA draft Rahyd Byrd and Chris Staples (@errrbody_hatechris) who turned in an MVP caliber performance.
In the quarterfinals an intense matchup between Kenny Dobbs team from Phoenix and Los Fearless from Compton turned into a sudden death overtime where cold blooded Chris “Flash” Tojin hit the 20 footer over everybody to ice it up. Meanwhile on the other court, Team Spaceball (@spaceballmag) out of Tokyo, Japan, sustained a physical and balanced attack from Brandblack but succumbed to the 30-minute time limit in a 18-12 defeat. Vince ‘Bodysnatcher’ Camper and NBA vet Keith “Tall Can” Closs lead Brandblack to a semifinal victory in a clash with the tournaments last standing international squad, Team Pacman, representing the Philippines. The win set the stage for a rematch of the 2014 VBL Championship game which took place 5 weeks earlier on the same asphalt battlefield. The ‘Redemption Game’ did not disappoint. With the sun setting at #hoopersparadise an anxious crowd watched some of the most drama filled streetball moments since Billy Doyle and Sidney Dean. Hall of Fame took the improbably 12-5 halftime lead with several highlight dunks along the way. Needless to say Brandblack went on a run cutting the lead down to one. The tension was palpable the whole stage was on their feet. A benches clearing incident in the waning minutes left eventual tournament MVP AJ ‘Chosen’ Harris (@callmephonsy) bloodied but in the end it was his sidekick ‘Evolution’ who knocked down the 18 foot game winning jumper giving Hall of Fame the win, 21-19. It was a very emotional game with every single player leaving all they had on the floor, lots of them with bumps and bruises but more importantly  unforgettable memories.