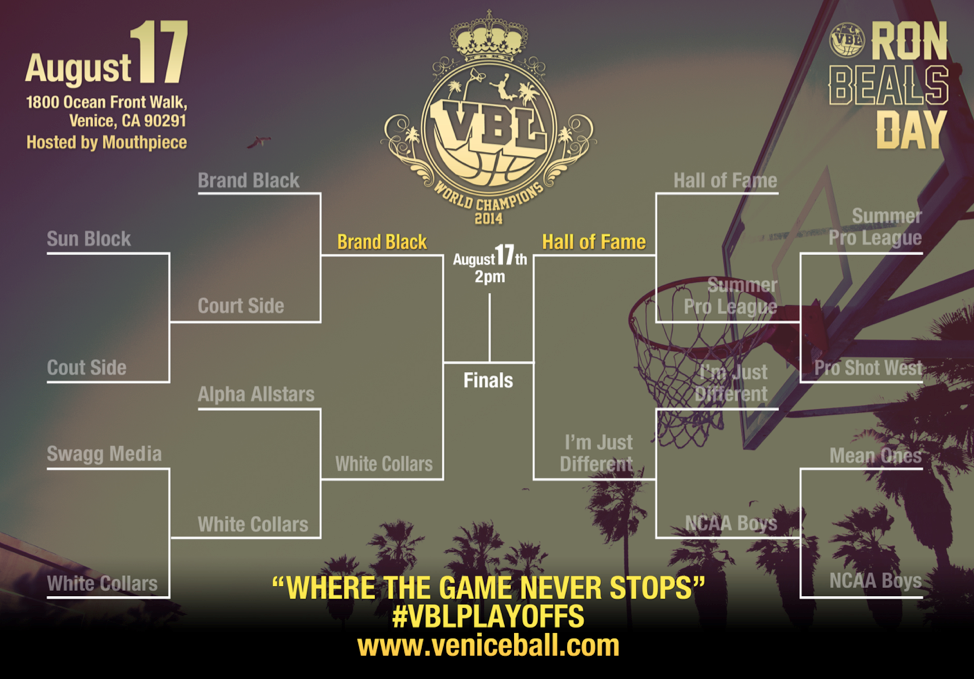 This Sunday, August 17th, the Champions of the 2014 Venice Basketball Leaguewill be crowned during what has the potential to be the greatest day in Venice hoops history.  The end of summer celebration now known as Ron Beals’ Day is a unique entertainment showcase featuring celebrities, basketball, live music, art and fashion.

Ron Beals’ is a streetball living legend who starred in the movie ‘White Men Can’t Jump’ and the last day of the summer league is now a dedication to him, his influence and the spirit he still brings to the courts.  In addition to members of the original WMCJ cast, several celebrities, artists and athletes will be on hand including rapper, Terrel Owens, Dirt Nasty, Charlie Tuna of Jurassic 5 and the House of Vibe, X-Factor winners Aknu, Metta World Peace, George Hill and former NFL Pro Bowler Keith Mitchell.

The day begins bright and early with the KVBL x Hoop Foundation Youth Showcase at 9AM followed by the official Ron Beals’ Day ceremony with District 11 council member Mike Bonin and the 50+ Battle of the Legends game at noon.  Health guru Rainbeau Mars will be hosting the 3rd Annual Bikini Ball at 1PM presented by Lee and Lani Swimwear which precedes the VBL Championship game.

After Thursday night’s VBL semi-final showdown 7PM at Hollywood Rec Center 1122 Cole Ave 90038 two teams will remain. The Championshipgame is scheduled for 2PM Sunday at Venice Beach.  Following the conclusion of the awards ceremony the action continues with the VBL Celebrity Game at 4PM.

Last but not least we’ll showcase the greatest jumpers and dunkers in the world for VBL’s signature ‘To The Top’ and ‘D-U-N-K’ contests featuring Keith Kloss, Kwame Alexander, Guy Dupuy and Chris Staples at 5:30PM.  The weather forecast for this Sunday is sunny and a high of 82 degrees so bring out the family, come early, stay late and enjoy our #HoopersParadise!  Hope to see you there.