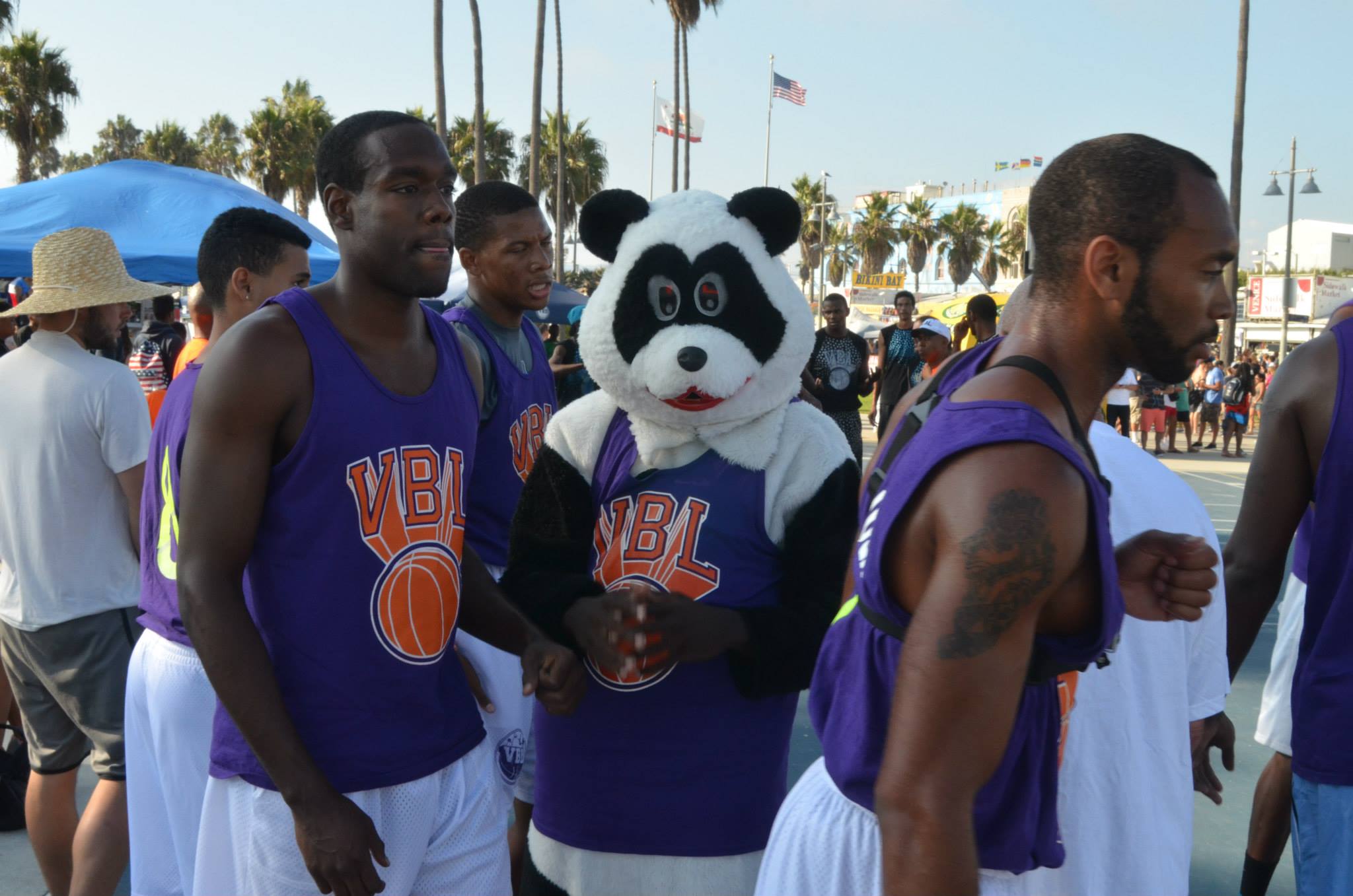 And then there were four…read about how the #VBLPlayoffs shrank from 8 teams to 4 in this Aug 10th edition recap.

As of August 11, 2014, Cinderella’s slipper still fits! With another improbable win, White Collars has moved into the Final Four and is poised to do more damage in the next round. Their latest win was over Alpha All-Stars, who was one of #theVBL’s toughest teams all year long and was considered a championship favorite.

Alpha entered the game at a disadvantage, since they only had six available players for the game. Once X-Factor got ejected in the first quarter (altercation with CSI Miami of White Collars), Alpha lost both their sparkplug and the remainder of their depth. Without X-Factor, they looked to other veteran leaders for support. Mike Jones and White Shadow, in particular, took charge and contributed a combined 38 points and 10 rebounds.

Although the rest of the team showed a valiant effort, they ran out of gas and could not keep up with the fast-paced style of White Collars, led by Deshun “All I Do Is Work” McCoy (18 points), 70s Show (14 pts, 5 assists) and Mighty Mouse (9 points, 8 boards).

With White Collars’ newfound confidence, they could become one of the most unlikely championship winners in the history of #theVBL. And to think, earlier in the year, 70s Show was hoping to get a single victory this summer.

Player of the Game: Deshun “All I Do Is Work” McCoy

The most entertaining game of the day was a grind-it-out battle between SPL and Hall of Fame. These two teams are evenly matched on paper…and it definitely translated to a physical contest on the blacktop.

If you break it down, SPL and H.O.F. is really about style vs. substance. Led by Vince “Bodysnatcher” Camper, SPL is a flashy group of athletes who try to embarrass and overpower you at all costs. Throughout the entire game, Bodysnatcher (30 points, 6 rebounds) caught a few bodies, JT Money (13 points, 10 rebs) dazzled with his versatility, and guys like Kid Bounce and Josh Gouch flew in for game-changing dunks.

But it was not enough against Hall of Fame, who always seems to do enough to win ball games. Sometimes, they win ugly. Sometimes, they blow out teams. But just know, if the game is close with H.O.F. in the final few minutes, the bar fight begins. This time, Hassan Stephens (18 points, 5 boards) and Rob Summers (14 points, 7 rebounds) were the stars who made plays. And even though Bodysnatcher (#theVBL’s leading scorer) was nearly unstoppable, Hall of Fame got it done anyway.

With their latest impressive victory, maybe Justin “YahDee” Archie will get his wish to play Brand Black after all. But first, they have to get by I’m Just Different in the Semifinals, which is no easy task.

Player of the Game: Hassan Stephens

This matchup had a bit of a lopsided start due to the NCAA Boys adding Pro Shot West’s featured forward Joel Brokenbrough to their roster at the last second. Due to rosters needing to be set prior to the playoffs, the NCAA Boys were forced to give 10 points to I’m Just Different before the game even started.

This potentially strategic move proved to be fatal for NCAA Boys’ playoff hopes as they fell to I’m Just Different 69-62. Those 10 points ended up hurting them in the long run and they very well could have pulled off the victory had they not picked up Brokenbrough. He finished the night with 6 points, 4 rebounds, and three assists…numbers they could’ve gotten with a guy from their own bench.

In terms of other performances, Chosen 1 was in top form, wheeling and dealing from the tip. No matter who was at the basket and no matter what type of contact Chosen encountered, he went up strong each and every time, trying to let his play do the talking and inspire his teammates. 27 points, 7 rebounds, 9 assists, and 5 steals are flat out all-star numbers and it’s a shame that his team couldn’t pull it out.

That’s not to neglect the help he had from his teammates such as No Fear (10 points) and Abramian (10 points), but ultimately it was the 10 point penalty in the beginning that crushed their championship hopes.

I’m Just Different got a playoff performance out of Inglewood who dropped 14 and 10, while altering many shots on defense and giving his squad plenty of second chance opportunities.

Although “The Bay” struggled from a pure numbers standpoint, he added plenty of intangibles that contributed to  his teams’ momentum. With about 5 minutes left in the 3rd quarter, The Bay crossed three different guys and scored a scoop layup down the middle of the lane to a raucous applause from the crowd.

For the most part everyone else on the roster struggled the entire game, with minor contributions. However, those contributions were enough (with the aid of a 10 point head start) to advance to the final four.

I’m Just Different will go head to head with Hall of Fame this Thursday. A matchup of YahDee vs. Chosen would have been an exciting one, but let’s see if Baby Panda, Boston, Young Mouf, etc can stop Archie’s championship hopes in his tracks.

Player of the Game: Inglewood
Brand Black v. Court Side

Not quite the matchup most expected as both of the best players from each respective team didn’t play, but it was a down-the-wire matchup nonetheless.

Usually when Kwame is absent, T-Will takes control and yesterday was no different. It seems like T-Will is never flustered by the competition and plays his style of basketball no matter how the defense tries to change his game. His final tally was 16 points and 10 rebounds. Many of his baskets came from fastbreak, second-chance, or hustle plays. Essentially he’s the kind of guy you don’t need to run a play for but he finds a way to stuff the stat sheet on both sides of the ball.

Beast has been quite consistent all season, and he did some more eating down low in the paint against Courtside. Many were looking forward to this very angry man to matchup with (and perhaps wrestle) The Panda’s Friend but, as stated before he didn’t play. It would have been interesting to see how Beast’s numbers (16/6) may have been affected with a seasoned NBA veteran who has a size advantage guarding him. In addition to Beast’s solid game, he also posted a highlight for the crowd, catching a lob and slamming it as if he were 18 again.

The rest of Brand Black chipped in here and there but there were no other major contributions. Big hopes were expected out of 7-foot Keith Closs but 4 points and 5 rebounds is pretty unacceptable. Perhaps the stifling defense and boxing out of Big Baby (6 feet, 10 inches) on Court Side’s end aided in this.

Big Baby finished with 12 points, 4 rebounds, and a couple of alley-oops but seemed pretty frustrated throughout with a 7-footer defending him.

Pop Champagne inadvertently became the featured player due to The Panda’s Friends’ absence. Pop finished with 19 points and 12 rebounds. He seemed unfazed by Brand Black and did all he could to muster up the win but ultimately they needed that extra punch (no pun intended, X-Factor).

Philly brought plenty of energy to Courtside but his performance was too little too late for his team. He forced many turnovers, pushed a lot of fastbreak scores, and crashed the boards, but it’s really the last play of the game that lost it for Courtside.

Beast missed a 2 for 1 free throw that would have given his team 6 point lead but instead Courtside got the rebound and raced down the court attempting to score but missing. The ball was tapped back out towards the three point line and #10 for Courtside heaved a long three while there was plenty of time on the clock. The wind caught hold of the ball and sailed out of bounds, along with Court Side’s chance of winning the VBL championship. Final score: 54-52.

The undefeated Brand Black All-Stars will face White Collars in a final four matchup on Thursday.

Player of the Game: T-Will