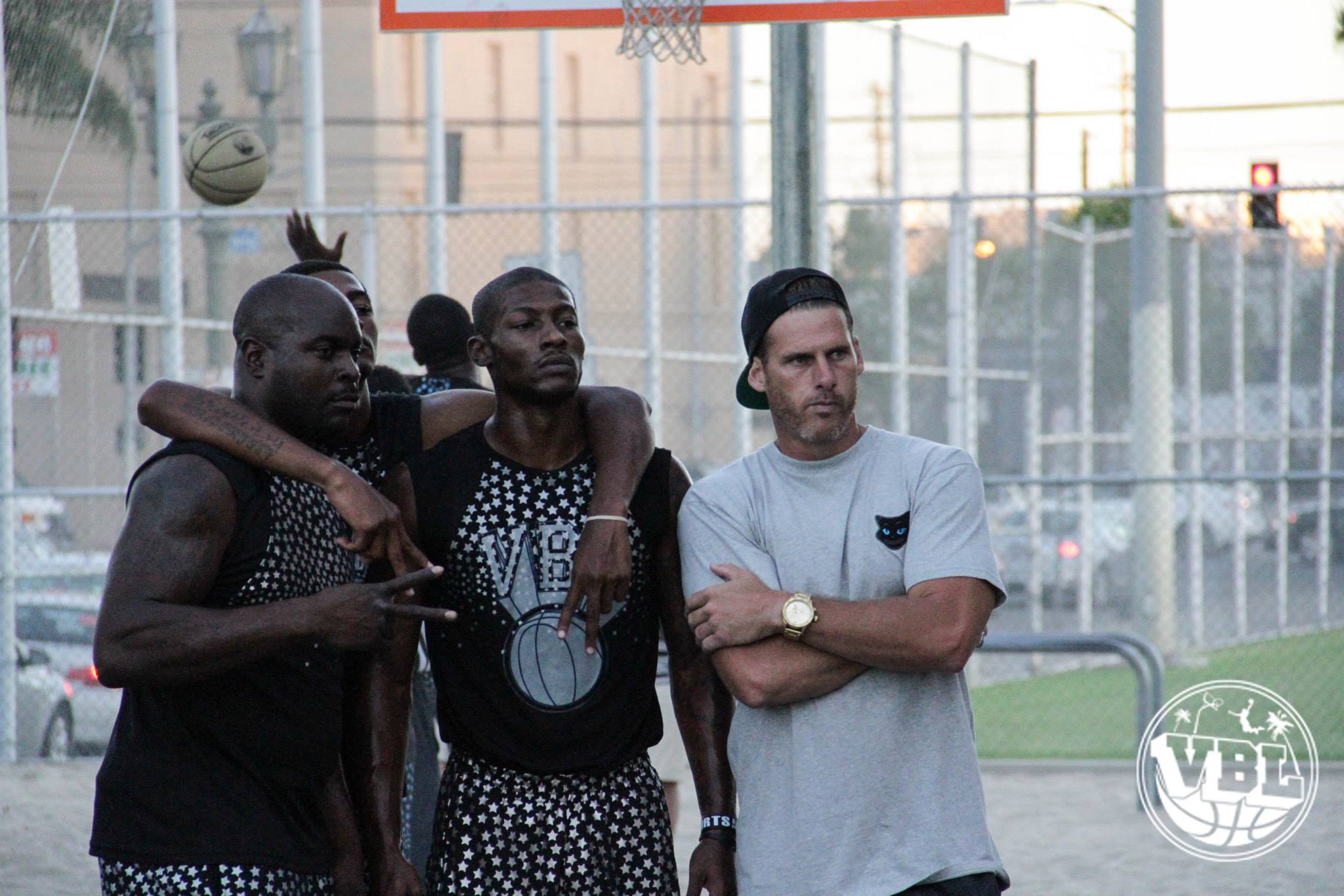 It seemed that around Week 6 of the VBL, many started to wonder;  ‘Can anyone beat Brandblack’? After Thursday’s 29-point beat down over White Collars in Hollywood, the answer is a resounding NO. Brandblack still remains the only undefeated team in the league as they head into the Championship game with a matchup against Hall of Fame on Sunday. And they achieved their 109-80 victory against White Collars WITHOUT Kwame “Hitman” Alexander. Hall of Fame certainly has their work cut out for them.

Taking a look at the “work” White Collars did in this matchup; Mr. Work McCoy had the standout game. He posted 24 points, and 8 rebounds in the contest, constantly playing with passion and intensity no matter what the score was. He even got a show-stopping dunk over Kramer that forced him to take a seat for 2 minutes.

Other than Work, That ‘70s Show had a decent outing with 14 points and 11 rebounds. White Collars needed more help from Mighty Mouse (8 points, 2 assists) and CSI Miami (10 points, 2 rebounds), but the Brandblack defense was too stifling and White Collars could never get any consistent offensive flow going.

Speaking of Brandblack’s defense, Young Fab lead the defensive charge with 6 steals on the game. T-Will also chipped in with 4 steals, and there were plenty of blocks to go around as a whole. Brandblack was intense for the jump-off, and applied that pressure throughout the entire game. They were already up by 24 points at the conclusion of the first half and their lead never really faltered after that. Shoutout to Beast catching another alley-oop in this contest and throwing it down as if he’s still a young dude. Hopefully he and the rest of his squad can carry over there newfound youth in the championship.

T-Will, aptly renamed “King Hustle” by Mouthpiece, dropped 44 points and 8 assists, tying Metta World Peace’s 2014 VBL single-game points record. He is a clear favorite to claim his second straight MVP title and there’s no doubt that he deserves it. Standup guy off the court, but an absolute terror on the court for his opponents.

Although this wasn’t much of game as most of it was a blowout, we still tip our hats off to White Collars for fighting the entire season and never giving up. Congratulations to Brandblack.

The Semifinal matchup between Hall of Fame and I’m Just Different was an instant classic, with drama that resembled a crazy Hollywood ending. In the beginning, the lights were flashing, the smoke was heavy and Hall of Fame rushed out to an early double-digit lead. All of the early buzz was on the guys from HOF, who looked unstoppable in transition from the tip.

Just when it looked like Hall of Fame would win in a landslide, Baby Panda came alive. He was unstoppable late in the second half and did whatever it took to keep I’m Just Different in the game. Panda drove to the basket, knocked down clutch threes, and played with ferocity down low. However, it was not enough to get the W and advance.

IJD also got contributions from The Bay, Dapper Life, Jay Boogie, Inglewood and Reddy Red but the powerful squad couldn’t capture the magic they’d been riding all year long at Venice Beach. Without their leading scorer, Young Mouf, IJD went down valiantly and ended their season with pride.

The award for this game’s “Best Player in a Leading Role” was definitely Justin “YahDee” Archie, who ended with 12 points, 5 rebounds and 4 assists. While his numbers may look pedestrian on paper, his impact was immeasurable. After returning from an ankle injury late in the fourth quarter, Archie helped HOF sustain the lead by knocking down two clutch foul shots in the final minute. The 2014 VBL MVP Candidate earned some more votes and kept his name in the running for the award.

But, most importantly, Archie got exactly what he wanted: a meeting with Brand Black for the VBL Championship. Since the beginning of the year Archie and HOF has been itching for a chance to slay the Beast, ground T-Will, contain the Freak of Nature, out shine Colossus, and take down Brand Black. Well now, they get the opportunity to pull off the upset.

Brand Black v. Hall of Fame will likely be the most hard fought game of the season, so be sure to catch #theVBL Championship at 2 pm this Sunday at the beach!