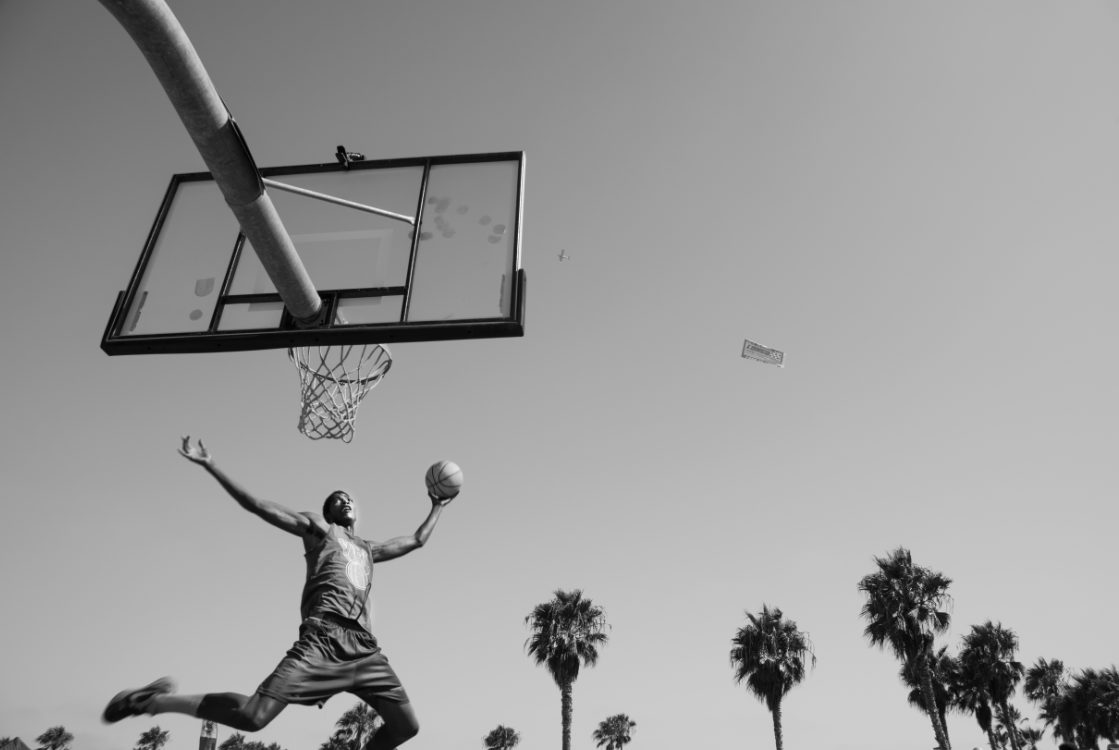 Black and White by Shooting hoopS

In words of our referee Joe

“So, we had an unstable cell come through Venice and at The Beach where I was Reffing basketball games outdoors.
We had lightning and thunder and rain.
OH MY!!
One particular thunder clap was so close and so loud that hundreds of folks scampered for cover as if a hail of bullets were coming. It was a bit scary.
Soon after, we heard multiple sirens blaring in the area just a block or two away.
However, we at The Beach did not hear about the lightning strikes or people hit for over 90 minutes.
Gradually, the sun came out, the Legendary Venice Court dried, and we were back to playing basketball.
An hour later, another unstable cell rolled through.
Metta World Peace!!
Yup, I got to Ref the former NBA All-Star and some of his friends. Lots of fireworks, and he was a really good sport.
Some awesome day!!”

#theVBL had an action-packed Week 7, with seven games on the bill as we head into the postseason. Highlights were alive and well over the weekend, as there was an incredible dunk contest that featured the likes of Baby LeBron and Thunder Dunker and a VBL showcase with exciting, non-stop action.

And the games did not disappoint either! Contenders like Brand Black and Hall of Fame continued to show dominance, while a few more teams (Swagg Media, Mean Ones and Alpha All-Stars) are slowly starting to establish momentum for the playoffs. Week 7 was just the start of #theVBL’s exciting stretch of basketball that is on the horizon. Now, on to the recap!

Saturday’s action was kicked off in style with a highly-competitive game between Hall of Fame and White Collars. With the help of newcomers like Young Trickery (12 pts, 7asts, 6 steals), Wings (11 pts) and Equinox (18 pts, 5 boards), White Collars (0-6) was able to exploit certain mismatches and counter Hall of Fame’s balanced attack.

A highly competitive game for three quarters, Hall of Fame (5-1) buckled down and got some key baskets to put them over the top. As usual, they got help from a variety of sources. Rob Summers (12 pts) followed up a strong Week 6 with another impressive effort, C4 (10 pts) got to the hole at will, and YahDee stuffed the stat sheet once again. If they keep it up, Hall of Fame will be a force to be reckoned with in the playoffs.

Let’s just say this game was more of a “showcase” instead of an actual competition…Since Court Side had only one player from their roster present, their “win” is currently under the review. But aside from the all of the technicalities, both teams put on nice performances.

Court Side’s Big Baby was the top overall performer, with a total of 26 points and 10 rebounds on the day.

In our Game of the Day, the Mean Ones (3-3) won for the second week in a row. This time, over the NCAA Boys (1-5). While last week’s win came down to the final buzzer (DJ Shump sealed the dealed with a game-winning dunk), the Mean Ones got it done pretty easily in Week 7.

Beard Gang was in full effect and produced one the top stat lines in #theVBL this year: 28 points, 12 boards, 6 assists, 2 steals. With a near-unstoppable inside-out game, Beard Gang imposed his will and refused to let his team lose. Time For Some Action (21 points, 10 rebounds) was a welcome addition and provided a nice spark that has not always been there for the Mean Ones this season.

NCAA needs to regroup if they are to salvage their campaign. The easy fix is simple: more firepower. Chosen One, Abramian and Lethal Weapon combined for 51 of the team’s 61 points. That won’t get it done against the top competition.

Another week, another win for Brand Black, who improves to 6-0. Winning seems to be the motto for Brand Black, since they have not experienced anything but that at the beach this summer. I’m Just Different (4-2) was their latest victim, although it did not come easy.

This game was a physical contest that saw, Beast (10 pts), Freak of Nature (22 pts, 10 rebs), and Mr. Colossus (15 pts, 6 boards) utilizing a strong inside attack to gain an advantage. Throw in T-Will’s usual consistency (13 pts) and it all added up to another victory for Brand Black. They have been the top team in #theVBL all year long and are the favorites to win it all heading into the postseason

Though IJD got the L, Young Mouf played a very nice game. He finished with 18 points (4 threes), 2 assists and about 500 taunts. If the rest of IJD plays with fire, they are an interesting team to look out for.

Thunder (and lightning) struck in this matchup, and that’s not a mention of Kevin Durant’s straight-to-DVD movie or the Oklahoma City Thunder. Shortly after this game was underway, a massive thunder and lightning exhibition (followed by some rain) literally stole the VBL show.

Before the bad weather, Zigg was taking care of business, dazzling the crowd with a mixture of ankle-breaking crossovers and crafty layups. After the weather, he cooled down a bit but maintained an overall solid performance, enough to notch yet another player of the game honor. Zigg finished on the day with 18 points, 6 rebounds, and 3 assists.

Also, Mike Jones “Boston Terp” arrived after the first quarter to provide additional thrust for his teammates. He finished with 18 points in only three quarters, looking virtually unguardable.

SPL received their usual boost from the Bodysnatcher but he and his team were no match for the defensive display the Alpha All-Stars put on Sunday. Bodysnatcher did manage to catch a couple of bodies with his crossovers, specifically against I.M. (of the Alpha All Stars.) Bodysnatcher crossed IM over, stepped back and buried the J in his face, receiving screams of laughter from the crowd. But Alpha got the last laugh with a 60-44 victory and improve their record to 4-2.

The New Kids on the Block keep on shining in the VBL. Swagg Media pulled off their fourth victory in as many contests on Sunday against PSW with a close 68-62 victory. This was a pretty tough game throughout with a lot of different lead changes.

The two biggest standouts for Swagg Media was Chris Staples and Jacko. Jacko had a nice overall effort with 20 points and 5 rebounds while Staples notched 14 points and 3 rebounds. Staples cooled off considerably from his 43 point outburst last week, but was able to knock down a clutch three in the end of the contest the helped seal the deal for Swagg. Mani Love did his usual routine of floor general, notching an all day high of 7 assists.

On the PSW side of things, Twin Powers fully activated for only their second time this season. The superior twin in the matchup was Luigi with 17 points, but they both combined for 25 points and 7 rebounds. Still this great outing for the twins wasn’t enough as PSW continues yet again to have enough offensive firepower at the end of the game to seal the deal. Reliance on outside jumpers will do that to you. They drop to 1-5.
Sun Block 71, Court Side 63

Metta World Peace didn’t play this sunday. Ron Artest did. Ron was in full form for the last VBL matchup of the day, getting into a heated 1-on-1 wrestling match with Donald “This Is For My Mama” Lee. As (World Peace) stated on his twitter account a day after the game,

That was just the tip of the iceberg in terms of World Peace. On many possessions he fiercely battled down in the paint, serving as the rim protector for Courtside and trying to invoke fear in his opponents by a little extra activity here and there after whistles. This is all within reason though, as Metta is an NBA star, with an NBA body, and NBA experience. Essentially he’s a target.

Donald Lee made it a point to go straight at Metta all game and finished with 21 points, 10 rebounds, and probably a sore body. His assignment for the entire game was Metta but he never backed down. Through his play, mostly non-verbal, he helped rally his team to a 71-63 victory.

Metta came out to play as well, sinking 4 threes in the first half, and finishing the game with a season-high 30 points and 10 rebounds. His colossal stats weren’t enough to get another victory for Courtside, so Metta has taken to Twitter to recruit some ballers to play with him next week.

Sunblock’s coach Sheldon Bailey could have been a storyline himself with all of the commentary he provided during the match, vehemently berating the refs about fouls. At one point, you could’ve sworn he was gonna put on a jersey himself and go out and compete. Either way, he coached his team to a new 2-4 record.

Random blurbs: Mute almost had a triple-double (21 points, 10 assists, 7 rebounds), Prince of Persia was forced out of action twice for being dunked on by Air Gordon…in the same game. Also, Happy Birthday Kaker!

After the season games, VBL put on a showcase of some of the best talent in the league. Fan favorites such as Kwame Alexander, Bodysnatcher, Mani Love, Zigg Zagg, Chris Staples etc. participated in this exciting exhibition showcase. Plenty of dunks, plenty of crossovers, plenty of alley-oops, and plenty of trash talking (Bodysnatcher and Mani Love.)