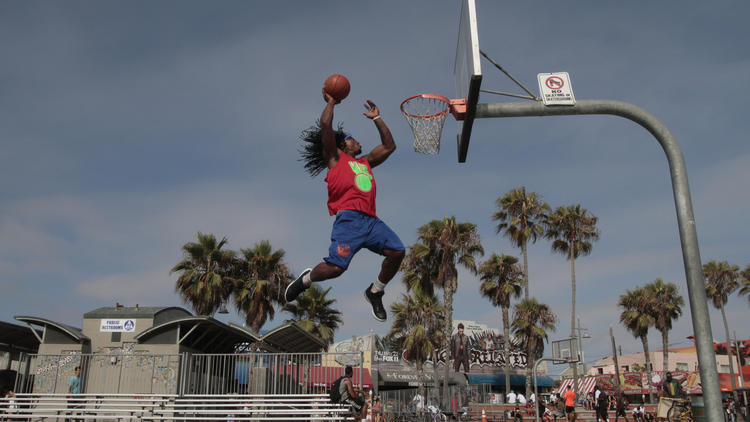 There’s a murmur in the crowd as the ball crosses over the Drew League logo at half court. Kwame Alexander is nowhere near the play, but the fans see his dreadlocks bobbing, see him streaking down the court, and know that the closest thing they will see to human flight is imminent.

A pass goes to rapper the Game, who typically has a quick trigger when it comes to shooting. On fastbreaks, though, he knows he’s not his team’s best scoring option.

In one motion, he catches the ball and bounces it hard just outside the paint to the left of the key, sending it toward the top of the backboard. Alexander, bursting up the center of the court, collects himself and takes off, rising to a height no opponent can defend. He floats, pausing near the rim to wait for the pass to settle into his outstretched hands.

Just like that, it’s in the bottom of the net on a two-handed slam.

The crowd, several hundred people in the King Drew High gym early on a Saturday morning, rises. One man jumps up and down. The Game just shakes his head and smiles.

Over the noise, the announcer shrieks, “That man is not a human being!”

A sinewy6-foot-7 leaper, Alexander is among the most spectacular dunkers in the country — this slam, like several of his other dunks, will wind up as a highlight on “SportsCenter.”

Alexander, 24, is a fan favorite on the Los Angeles summer basketball circuit, playing in four leagues — in the Drew League, he’s on the Game’s La Familia team. And his legend is growing; he was recently told he had earned a part in a Nike commercial with Kevin Durant.

“This is what I wanted to do. This is what I signed up for,” he says of his experience in the Drew League. “I’m living my dream, and my ultimate dream is the NBA.”

That’s dreaming big for a player out of Cal State San Bernardino, which competes in basketball on the NCAA Division II level. But Alexander has overcome long odds before.

Growing up in Moreno Valley, he wasn’t very tall and was very angry. The second oldest of four siblings, he was the only son in a family that was divided after his parents divorced when he was 15. The split left Alexander, his three sisters, mother and grandmother homeless for a year, he says.

The family bounced from couch to couch and friend to friend for a while and Alexander became bitter. His anger was expressed at school, where he talked back to teachers and was constantly in trouble — when he actually bothered to show up for class.

Basketball had been in his life since he was 3, but he was forced away from the sport his first two years at Moreno Valley Rancho Verde High because he was academically ineligible.

The summer before his junior year in high school, he realized the pent-up aggression needed to be channeled in some kind of positive way.

“That’s when I really got that killer basketball mentality and when good stuff started to happen to me,” he says.

His change in attitude coincided with a growth spurt that shot him up six inches, to 6 feet 4. He recalls that when he tried to dunk for the first time he got his entire hand and part of his arm above the rim.

But while Alexander managed to salvage his basketball career, his poor grades haunted him. He spent two years at community colleges before landing at Cal State San Bernardino.

He never shortchanged basketball, though. San Bernardino had workouts at 6 a.m. that the coaches called “The Breakfast Club,” meant for players who needed extra work. Alexander attended the sessions for the guards … and the wings … and the big men.

Unrefined at first, Alexander became a Division II All-American his senior year, when he averaged 17 points, nine rebounds and close to two steals.

“When we got him, he was a big-time athlete that couldn’t really dribble or even make a move with his back to the basket,” says Robert Tossetti, a San Bernardino assistant. “Now, I think that guy is a really good, true basketball player. He understands the game better and how to play the game now, as opposed to just being an athlete.”

There was never debate that Alexander was a special athlete. His debut in “Sports Center” highlights came when he was playing for San Bernardino and leaped over a defender who was braced to take a charge. That was the No. 2 “Play of the Week.”

Alexander has come a long way but he knows he’s far from being a polished NBA prospect. He’s not tall enough to play in the post and his jump shot needs work. He also knows that as long as he can jump, as long as he can stay in the air, there will be possibilities once he hits the ground.

A 2011 “Sports Science” video claimed that the highest recorded vertical reach in the NBA belonged to Shaquille O’Neal, who got up to 12 feet 5 inches. In a 2013 contest held at Venice Beach, Alexander touched over 12 feet 6 inches. His 43 1/2-inch vertical would rank him among the best in the NBA.

That kind of athletic ability has drawn attention from the pros, and not just in basketball. The NFL’s Chicago Bears and Seattle Seahawks both flew him out for tryouts even though Alexander hadn’t played organized football since middle school.

He also had tryouts for the Lakers and the Clippers.

Alexander says his sessions with both teams went well, but after not getting an offer from either he played last season for AGO Rethymno in the first tier of the Greek Basketball League, then finished the year with HKK Capljina in Bosnia.

Playing overseas was a learning experience. In college, he could get by because he was physically superior. Pro ball was more a thinking man’s game.

“The players over there aren’t fast and they aren’t athletic, but they are smart,” Alexander says.

He has his eye on a tryout this month with the Korean Basketball League, where salaries for first-round picks are around $250,000.

Until then, he will be honing his skills in the Drew League, which has games Saturdays and Sundays during the summer. Alexander already has a following here.

Or, as the PA announcer put it after the Game fed him for that highlight reel dunk: “It’s 10 a.m. on a Saturday, and if any other team was playing in the gym right now, there would be five people here. You’re here for that Kwame Alexander, La Familia experience!”