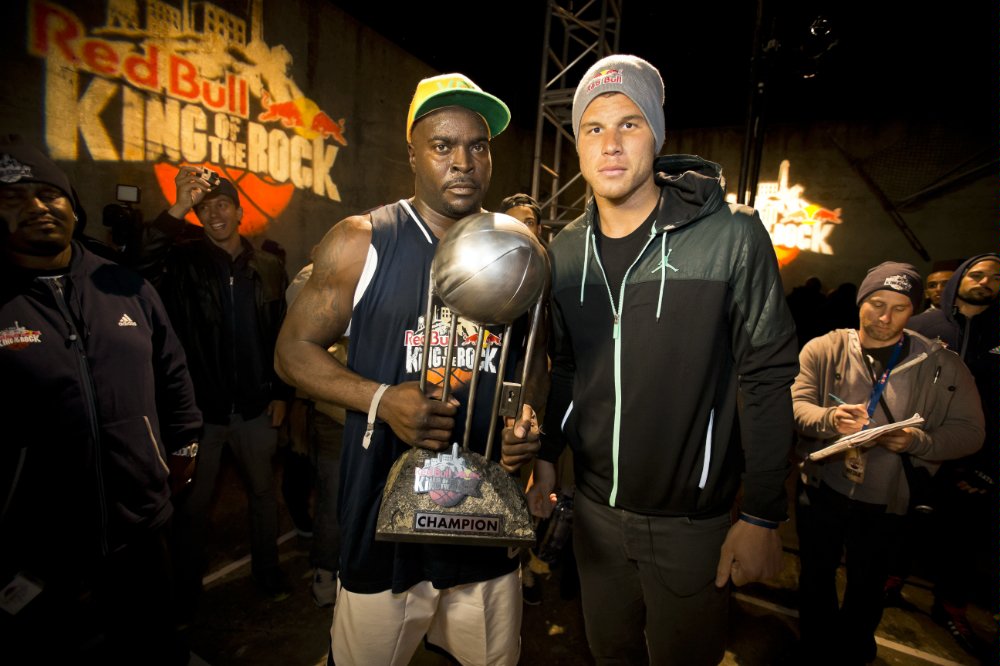 Beast aka TREX held it down Saturday for The VBL. He has been our most loyal player since summer 2007, 2 TIMES MVP, a true competitor, indoor or outdoor Tarron truly loves this game and makes NO EXCUSES. Lookout for his HIGHLIGHT Videos coming out real soon! HE WAS TOO TOUGH TOO STRONG FOR THE COMPETITION

SAN FRANCISCO, Sept. 29, 2013 /PRNewswire via COMTEX/ — It has been 50 years since Alcatraz was home to America’s most notorious criminals. This year, for the fourth and final time, sixty-four of the toughest international street ballers gathered on one of the world’s most iconic and recognizable locations for the Red Bull King of the Rock Finals before the one-on-one basketball competition heads to Taiwan in 2014. The talent pool was better than ever, as half of the final eight players were from outside of the U.S

The one-on-one basketball tournament brought 64 of the best players from 19 countries to face off in one of the most notorious locations on earth. Amidst the crumbling walls and the eerily lit cell house, in front of hundreds of spectators, including guest host, basketball All-Star Blake Griffin, the players battled each other on the cracked and cold concrete in The Yard. But there can be only one king, and at the end of the night it was Tarron “The Beast” Williams who was left standing to take the trophy. The 36-year-old from Inglewood, Calif., who got his nickname from Baron Davis, overcame severe leg cramps suffered in the semifinals to shut down Sergio de la Fuente from Spain, 6-0, and left The Rock as The Champ.

“It was a tough battle,” said Williams. “I was starting to cramp up, but I had to keep going and not let my fans down. I’m proud of myself. I trained hard, rode my bike to work and played basketball outside late at night, sometimes with no lights.”

The 64 players relied on endurance and composure as they battled through fierce competition, cold temperatures and the worn concrete courts. With four half courts in simultaneous game play, the action was intense and almost nonstop.

“Red Bull King of the Rock was an unbelievable experience,” said Griffin. “This has got to be the coolest basketball event I’ve ever been to. The atmosphere, the crowd, the players, it’s streetball at its finest. It’s not just an American-dominated sport anymore. Having four international players in the final eight shows you that great basketball players come from all over the world.”

The night was full of upsets, as two-time defending champion, Hugh “Baby Shaq” Jones, and 2010 winner, Izeah “Clutch” Bowman, both were eliminated in the second round.

Porter Mayberry, a 5’5″ YouTube dunking sensation, won the #dunklikeblake social media contest and had the opportunity to thrill the crowd with an array of dunks. Additionally, a few select players were part of a dunk contest and it was San Diego’s Dontae Burnett who Griffin and Jimmy Spithill, skipper of the America’s Cup-winning Oracle Team USA, judged the best.

First held in 2010, Red Bull King of the Rock is the only official sporting event held on Alcatraz and the first time basketball has been played on The Rock since the inmates left the island 50 years ago. This year the event included players from not only the United States but also Austria, Azerbaijan, Bahrain, Brazil, Czech Republic, Georgia, Hong Kong, Italy, Japan, Jordan, Kuwait, Lebanon, Russia, Serbia, Spain, Taiwan, Tunisia and United Arab Emirates.

Of the 64 players that participated on The Rock, 30 earned their spot through one of the 21 U.S. qualifiers, 19 from the international qualifiers and 13 were U.S. wild cards, in addition to Baby Shaq and Clutch, the two previous winners. Competing players included (listed by player number):

Both the Qualifiers and the Finals on Alcatraz followed a straightforward concept where players went head-to-head in raw outdoor basketball, using a single-elimination tournament bracket. Games lasted five minutes and were subject to regulation hoops rules and scoring (two and three pointers). Players had to be tough to make it to The Rock, but also had to play smart – five fouls equaled an automatic loss. After each game, the loser walked, and the winner faced his next opponent.

Red Bull teamed up with EA Sports, adidas, and SOL Republic for this historic event.

Through the Red Bull network, hi-res video and still images are captured and made immediately available for editorial use for all media channels including television, film, print, mobile, and digital. The content is centrally located in the Red Bull Content Pool for media partners at www.redbullcontentpool.com.