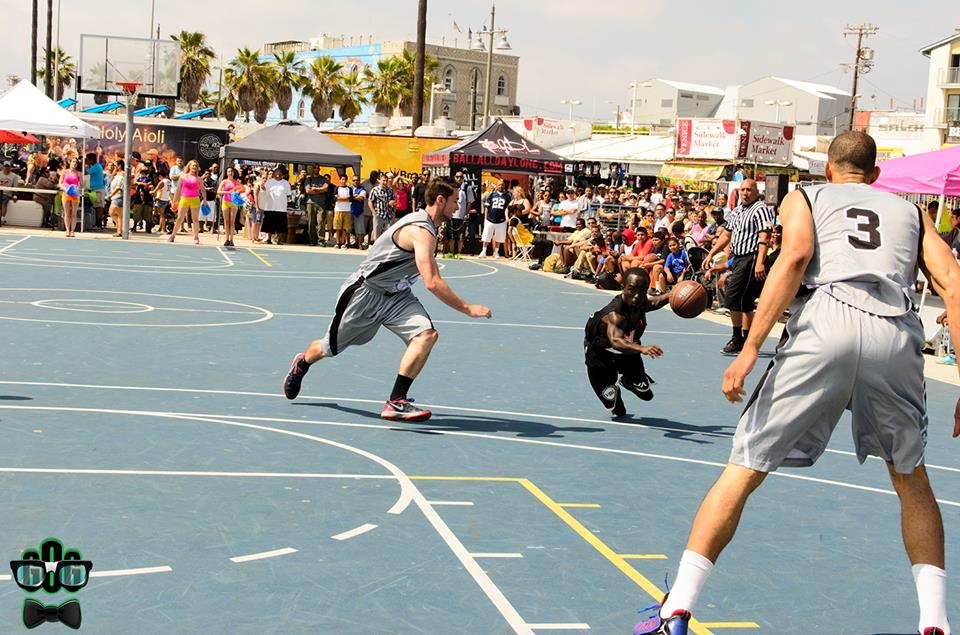 The VBL is back! The summer of 2013 is here, which means Venice Boardwalk turns into the mecca of tourist attractions. Every Sunday of the summer, VBL takes over the basketball courts, adjacent to muscle beach, as we put on a show like no other. Highlight driven, physical, intense basketball mixed with live music and performances presented on a stage that can only be found in a handful of places around the world.

After a great morning with the kids from the KVBL Natural Leaders Camp, the stage had been set for a great kick off to the 7th annual VBL season!

Thank you to the 53 kids who participated for opening Sunday. Also special thanks to our amazing entertainers The Rej3ctz, Go Gettas, The Finaticz & the VBL Girls.

Mouthpiece says:
” VENICE BASKETBALL LEAGUE STAR GUEST: Thanks to our celebrities who came through to support from BET’s show The Game she plays Brit Brat, Katlynn Simone, The Rejects, Fanaticz and Hall of Famer WNBA 5-Time Champion Superstar Cynthia Cooper. We appreciate them for coming through. Also thank you to all the people who came out to support and repp for the VBL. We back next Sunday same time 1230pm-5pm. C’mon down and hang out. “

T-Will was a straight beast out there. He was just too big and strong, bullying people as he was taking the ball to the hole. He looked unstoppable out there. But then he Lebron’d it and started falling in love with the outside jump shot. This may have been due to an untimely tweak to the ankle after finishing an And 1 during the 2nd half. Combine that with Jet Lux increasing their defensive intensity, denying easy access to the paint and you got yourself some convenient excuses. However, ROTN countered Jet Lux with their own lockdown defense towards the end of the game, creating steals that lead to fast break points. This game was a great start to the season. It had it all, stellar individual performances on both sides, solid team play and a back and forth game that kept everyone on the edge of their seats.

This newcomer was given his AKA within the first minutes of the game by Mouthpiece (one of the VBL MC’s). This unnamed assassin, along with #5 from Jet Lux, who was 1 rebound shy of a triple double, kept their team in the game and made it good one till the end.

Player of the Game: #15 AJ Harris aka “The Chosen One” did a little bit of everything, leading his new team with 15 points, 10 assists, 3 rebounds, 6 steals & 1 block. Here’s a quick rundown on the self-proclaimed Chosen One of the VBL:

On top of all of that, The Chosen One had the place jumping after throwing down his vicious one-handed tomahawk dunks. This 6’2” PG is one of the most explosive players to have ever played in the VBL. Don’t sleep on this scrawny, little guard… the man has boosties!

Game recap: This one was pretty much over as soon as the tip was thrown up. The NCAA Boys took over the game with their quickness, athleticism and a team chemistry that grew throughout each quarter. Their unrelenting defense led to numerous highlight plays that kept the crowd’s interest. The fact that the game was a 22-point blowout didn’t seem to bother anyone besides the White Collar bench and fan base. Granted, the White Collars were missing their core roster for week 1, but the overall effort was just not there. However, I will say this, if the White Collars are bringing back some of their players from last season, be on the look out for a bounce back game in week 2.

He didn’t do much in the box score to impress anyone, but this guy is efficient and makes the game fun to watch. At first glance, anyone who sees this guy walk on the court is going to wonder if he’s lost because he simply does not look like a basketball player. Don’t judge a book by its cover… the man is entertaining. NCAA Boys are my early pick to go all the way and I predict they will be the fan favorites all season long.

Game 3 (Featured Game of the Day)

SPL teammate, Robbie Robinson, also posted a solid 22 points and 8 rebounds that cannot go unmentioned. He gifted his team as well as the crowd with his incredible athleticism, almost showing it off with high flying dunks and skying above everyone for the tough rebounds.

If the Beach Warriors had pulled out the W, Michael Blue aka Jet Blue would have hands down been awarded Player of the Game. His 24 points, 9 rebounds, 4 steals and unbelievable ability to jump above the rim, throwing down massive dunks and rim rocking alley oops, had the crowd roaring all game.

This game can best be described as being a game of runs. SPL jumped out to an early lead, catching the Beach Warriors on their heals. The Warriors’ team captain, YouTube sensation, Mani Love, standing at 4’5” struggled to get his offense going at first. He started to find a groove by setting up his teammates with some nice dimes and one in particular that had the entire place go crazy. It was a perfectly designed inbounds play that had Mani inbounding the ball, throwing a perfect alley oop to his teammate, Jet Blue, who was cutting down the lane after curling off a screen. SPL jumped out ahead late in the game once again, but this did not deter the defending champs. By turning up the defense and getting easy buckets at the rim, the Warriors chipped away at the deficit. With seconds to spare, they were able to tie the game up on a tip put back, thanks to the late heroics of Blue once again. OVERTIME! SPL managed to capitalize on a couple miscues in the 2 minute OT and sealed their first W of the season.

This low scoring bout was a defensive battle. In my honest opinion, no one player from Sunblock stood out and earned the Player of the Game award. This was a team victory. But in order to keep things fair, I’ll flip an imaginary coin and pick my Player of the Game.

Sunblock’s #32 VBL 2013 winter league stand out player of the year, Brandon Towns. B Towns did not have the same success on the outdoor court as he did in the gym during winter league, but he still managed to fill the stat sheet and continue to provide his team with the intangibles. His stat line: 8 points, 5 assists, 4 rebounds & 4 steals. His energy on defense and his ability to get to the rim late in the game helped secure this W. However, without the bouncy #23 D-Patt, I am not sure where the offensive production would’ve come from. He finished with 14 points, 5 rebounds and some very authoritative dunks that shifted momentum at key points in the game.

Where this game lacked in offensive production, it made up for it in good, old fashion physical play. The Mean Ones came out aggressive, looking for revenge and payback for losing in the Championship last season. Everyone could see that the Grinch was focused and playing almost as if he had a chip on his shoulder. Unfortunately, the shot was not falling for him. But if there’s one thing you can count of with the Grinch, if he’s got the rock, he won’t hesitate to keep shooting. I respect that about his game. He finished with 12 points and 5 assists, but he was lacking efficiency in his shot attempts. At the end of the day, Sunblock’s athleticism and team chemistry, which they carried over from the winter league, helped clinch their week 1 victory.

Overall it was a great day at the VBL, full of entertainment and amazing people. We would like to thank our sponsors for all of their support:

The fun in the sun never stops! We’ll be out at Venice Beach every Sunday!