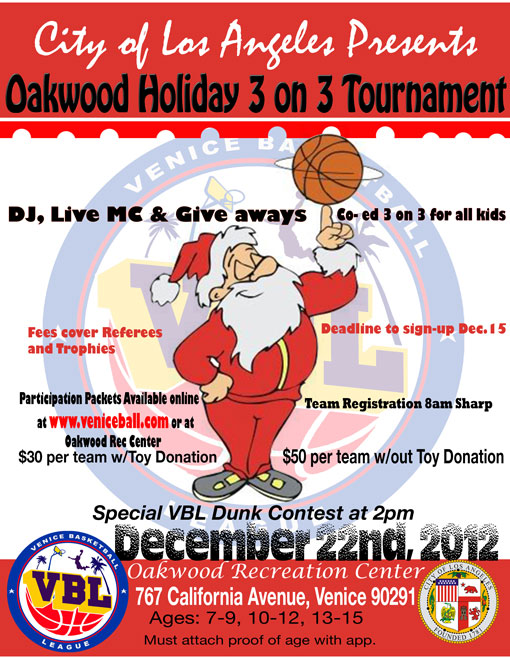 Make sure to join us this year for our Toy drive events. It always feels good to give to the less fortunate. Bless up!

Basketball is a competitive sport but it’s also a team sport. Therefore, good sportsmanship and respect for teammates, oppo-
nents, referees, and spectators will be expected from every singe participant. Team captains, coaches, and parents are
expected to aid in controlling the conduct of anyone associated with the team, and will be looked upon as a spokesman for the
team. Poor sportsmanship will NOT be tolerated and will result in a warning followed by ejection from the tournament deter-
mined by referees or tournament officials. Acts such as fighting, taunting, cursing, or verbally attacking any person are just
some examples of bad sportsmanship that will NOT be tolerated. Decisions made by tournament officials are final and are not
subject to review by any sources.

All shooting fouls will result in one free throw for 2 or 3 points. No And 1 rule – If a player is fouled while shooting 2 or 3 points will be granted accordingly.
Fouls committed in the act of dribbling or passing will result in maintained possession for team that was fouled. Each team is allotted 8 team fouls per game, after the
tenth team foul, all fouls are considered “shooting fouls, after 8th fouls the player will shoot one shot for 2 points.
Offensive fouls result in a change of possession. Players that amass 5 personal fouls will foul out and have to sit the remainder of the game.

A. Technical and Flagrant Fouls

Technical or flagrant fouls will be determined by referees when a play or action is deemed unsportsmanlike or dangerous.
These fouls will result in one free throw and possession of the ball. Two technical/flagrant fouls by any team in one game will
result in a forfeit for that game.

Stalling or the deliberate “slowing down” of the game in order to gain an unfair advantage is STRICTLY prohibited. The first
offense will result in a warning and the second offense will result in a technical foul against the offending team.
4. Length of Game (All Divisions)
-15 minute games
-Running clock periods except during free throws in the final minute of the game.
-If teams are tied after regulation, teams will play a sudden death overtime period in which case the first team to score a basket
wins the game. The first possession of the overtime period is determined by alternating possession.
-Each team will only be allotted one 30 second timeout per game. If teams are tied after regulation, teams will NOT receive an
additional timeout for the sudden death overtime period.
-Substitutions may be made only during a timeout or “dead ball situation.”

The ball must be “checked” by an opposing player before it is put into play. The ball must then be passed to begin play.
6. Change of Possession
The ball will change possession after each scored basket and all made free throws with the exception of technical/flagrant foul
free throws. There will be no “winner’s” rule.

7. Taking the Ball Back

The ball must be “taken back” on each change of possession, regardless of whether or not a shot was attempted. “Taking it
back” means bringing your whole body and the ball behind the three point arc before attempting a shot to the basket. Every
time the ball goes out of bounds the team with possession must take the ball back behind the three point arc before they can
attempt a field goal. Failure to “take it back” will result in a loss of possession and a loss of any points scored during that
possession.

In a jump ball situation, the ball will first go to the team that lost the opening coin toss with alternating possession thereafter.

The tournament format will be pool play followed by bracket style playoffs. For pool play, each team plays 3 games. The top 16
teams from each division advance to the playoff bracket. Teams are ranked by best record in pool play. Tie-Breaker will be
determined by average point differential of all three games (i.e. If Team A wins game one by 2 points, game two by 8 points,
and loses game three by 7 points, then Team A’s point differential for its three games averaged out is +1 differential).