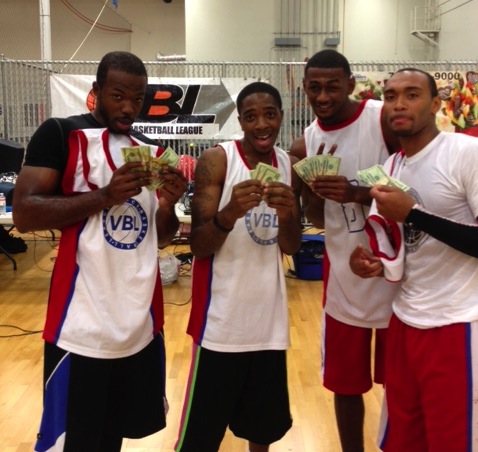 Big Mo, Young AJ, Stretch and Thunder Thunder (left to right) win the first annual 3 on 3 tournament.  Over 25 VBL teams participated for this amazing event. Shootout to BallisLife for producing a quality event!

The VBL is partnering up with BallIsLife to bring to you an event you don’t want to miss!

On November 10, 2012 we will bring you the very first 3 on 3 event of its kind. From multiple divisions for different age groups to the 8 foot adult division and dunk contest to the open 3-Point contest. This will be an event that you will NOT want to miss.
Not only will we have great basketball but everything will be indoors at the 242,000 square foot American Sports Center with 26 NBA size basketball courts.
So stop messing around and get your team signed up as soon as possible! Cash and Prizes will be given away throughout the day for participants of all divisions!

3 on 3 basketball is a time for basketball enthusiasts to take to the courts and compete. If you have been to any 3 on 3 event you would have witnessed the thousands that come out to play the game they love and get the opportunity to put their team and pride on the line against anyone else. At the same time it’s all about the experience of being apart of that event. Sponsor booths are set up, nba tickets are being given out, prizes are given out all day long, music artists show up and perform on stage and the heavily anticipated dunk contest happens mid day. All of this is packed into an awesome day of basketball and a great experience overall for the fan/enthusiast. This is what we want to create with our event but in our own way.

1. Our event will happen at the american sports complex in Anaheim, Ca. This facility has 27 full basketball courts with NBA level basketball hoops. Our experience will all happen under 1 single roof on indoor courts which is highly beneficial for the enthusiast who generally does not like to play outdoors.

2. Our event will feature an 8 foot hoop division for anyone under 6 foot. Why are we doing this you may ask? Growing up watching Michael Jordan, the only thing I ever wanted to do was dunk the basketball in a game. Being 5 foot 9 inches tall, I have my limitations. Adding the feature of an 8 foot goal for us men/women who can’t dunk on a 10 foot goal adds not only a cool factor but lets them live our their fantasy of being able to dunk in a game or dunk on their opponent!

3. 3-point Contest – We will have a 3-Point contest with a prize to be given to the top 3 scores. We will have a dedicated sponsored half court for contestants to put up their best scores throughout the day. The top 10 scores advance to the finals at 3pm to compete for cash and prizes in front of an audience.

4. 8 Foot goal Dunk Contest – Playing back to the fantasy of wanting to dunk in a game. How many people do you know that can do crazy dunks on an 8 foot goal but can’t quite do anything on a 10 foot goal? This is another part of our event in which the fan/enthusiast will be able to win cash/prizes while living out their fantasy of competing in a dunk competition in front of a large audience and the ballislife cameras!

5. 10 foot Dunk Contest – This contest will be Invite only. We are bringing out the best dunkers in the world. Kenny Dobbs, Guy Dupuy, Gary Smith, Myree Reemix Bowden, Josh Kioh etc. These guys will go head to head in a winner takes all contest. We will be flying guys in from all over the country to put on the BEST dunk contest so that we can make sure this event gets on espn sports nation. This event will be the most branded event of the day. La Live 3 on 3 dunk contests have received well over 1 million views on youtube in the past couple years alone and have been featured on espn every year.

6. We are offering a 3 game guarantee to every team that enters. Each team member will be given a goody bag with an event t-shirt, water bottle and lanyard.

7. Multiple divisions so that we can separate skill levels

Our goal with this event is to create a 3 on 3 event for Orange County that is not only fun but something people of all ages can look forward to happening each year. We want the fan/enthusiast to remember this event and what was apart of it but also to be competitive with it.

This event will take place on November 10, 2012 at the American Sports Complex.