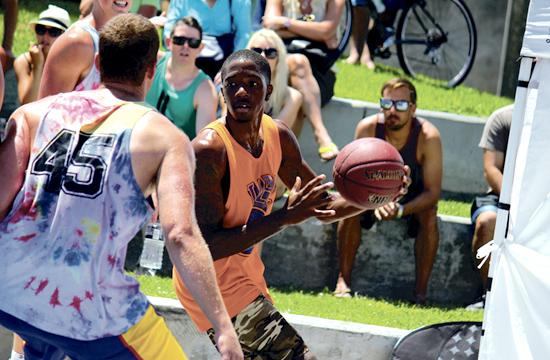 AJ Harris scored 25 points and 10 rebounds as he led the Beach Warriors to victory against Sunblock 65-54 on Sunday.

Special To The Mirror

Hundreds of fans gathered at the legendary Venice blue courts on Sunday despite the 90-degree heat as part of the Venice Basketball League.

The double header featured the Beach Warriors playing Sunblock while The Mean Ones took on the 3G’s.

AJ “The Chosen One” Harris arrived late to the game, but it did not stop him from having a double-double scoring 25 points and 10 rebounds as he led the Beach Warriors to victory against Sunblock 65-54.

“I’ve been put in this situation dozens of times where I’ve had to step up to win,” Harris said. “I came in focused and playing with these guys makes it easy. I love coming out to support and to play for the Venice Basketball League.”

The Beach Warriors dominated the first half and kept Sunblock’s star guard Ja’shon Hampton aka “Jay Wizzle” scoreless in the first half.

Hampton has had experience playing basketball in college at Cal State Dominguez Hills and across the border for the Mexican Basketball League team called The Lechugueros in 2008-2009.

“Coming out to play at the Venice Basketball League is fun and competitive,” Hampton said. “This is the first year that I’ve played for the league and it’s great to see so much talent out here each and every week.”

Both teams started the second half strong with Hampton finally scoring and hitting back to bring Sunblock within three points at 41-38.

The game stayed close as Sunblock pulled it together and knocked down key shots late in the fourth to give the Beach Warriors a competitive edge, but Brandon “The Mute” Fields sealed the victory with a powerful slam dunk with 30 seconds remaining to put the Beach Warriors up 61-52.

Zach Puchtel, aka “Thor” of the Beach Warriors, had two key blocks to keep the momentum going late in the fourth-quarter and he ended up with a double-double knocking down 18 points, 11 rebounds, and seven blocks.

The victory for the Beach Warriors was key as they are now (4-2) in the league and third overall in the standings behind the The Mean Ones and 3G’s. The win will give them a competitive edge in placing for the playoffs that will begin in a couple weeks.

The second double header was a thriller that came down to final seconds as the two undefeated teams battled for the top spot in the league.

The Mean One’s maintained the lead throughout the game and the 3G’s made a late comeback in the fourth quarter.

Deondrae Lewis received a lob from teammate “D Little” to put the 3G’s up for the first time 50-49.

The 3G’s had an opportunity to score in the last few seconds but came up short. The Mean Ones prevailed winning 64-62 as they remained undefeated (6-0) and maintained the top spot in the league.

“We stepped up our game in the fourth-quarter, but we missed some key shots in the last seconds,” Lewis said.

The Venice Basketball League continues this Sunday, Aug. 19. The battle for the top spot will continue and the playoffs for the league are set to begin Sunday, Aug. 26.