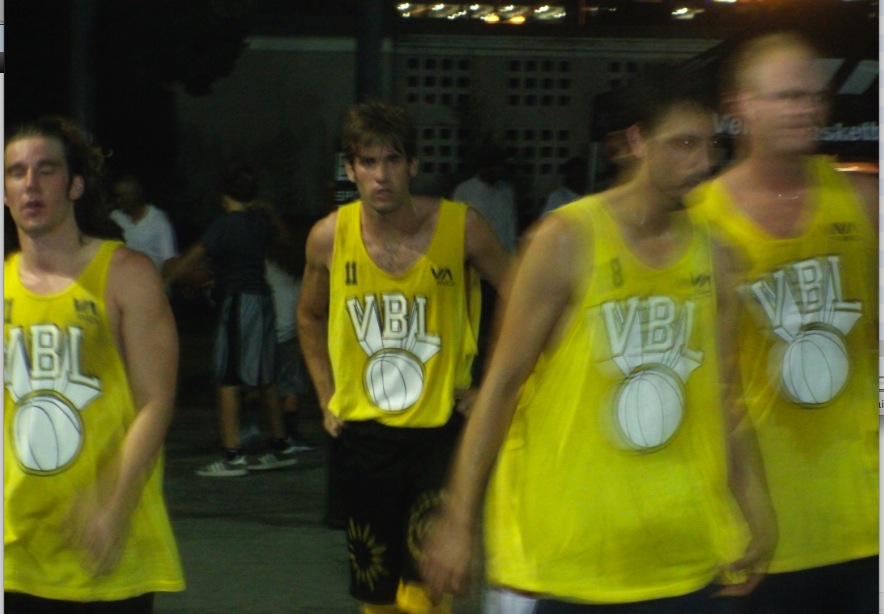 With stakes high and the energy to match, Thursday’s Play-Off opener between the Mean Ones
and NCAA Boys at Hollywood Park started the evening off. Heading into Semi-Finals, which will be taking
place this Sunday, August 28, 2011 back on our home turf at the world famous Venice Beach courts, the
first quarter was a close one ending with a score of 20-23 with NCAA in the lead. As usual, Mean Ones’
#11 Grinch showed great leadership and sparked his team into action going into the 2nd quarter scoring
11 of his 24 points. The NCAA Boys would not lead for the rest of the game as Mean Ones pulled away
in the second quarter and maintained the lead throughout. #23 Keith a.k.a. “Frost” led Mean Ones to
their 91-76 victory over the NCAA Boys, who are now eliminated from the competition, with 26 points,
finishing the fourth quarter with a 12 point scoring rampage.

Next was what appeared to be a great match up between SunBlock and White Collar but
ended up being more of a blow out for White Collar. With a 20 point lead going into the 2nd half, #69
Ferg a.k.a “Irish Giant” of Sun Block attempted to bring the team back into the game scoring 8 of his
20 points in the 3rd quarter and getting 3 blocks. Supporting efforts failed to cut the deficit by much
and with a final score of 74-62, the victory went to White Collar, removing Sun Block from the final
competition. Led by #99 Chad a.k.a “Agent 99” with a total of 26 points and hitting 6 three pointers it
was lights out for team SunBlock.

As the Sun went down and energy began to drop United Nations and Venice Beach All-
Stars reignited the fire for spectators. The battle between the CEO’s teams was quite a spectacle.
Intensity was fierce as United Nations trailed by 6 at halftime, 38-44. The deciding factor for the All-
Stars to maintain their lead laid in the fingertips of #12 Tim a.k.a “Spiderman” and #9 The Beast as
they consistently dominated throughout the entire game leading the team with 28 and 26 points
respectively. Jon Nash himself hopped off the bench and scored 8 points with high defensive intensity.
With United Nations’ #11 Tim a.k.a “Prime Time” and #24 “Time 4 Some Action” both scoring 16 points
and #12 Nick “Jungle Boy” hitting two 3 pointers and scoring 14 points, United Nations couldn’t seem to
pull themselves back into it and in the end were defeated 73-81.

The last game of the evening was played between Mazel Tough and Team Advantage. Another
deceiving match up, Mazel Tough just couldn’t reduce the lead to within 15 points. Ending the night with
a final victory of 93-69 over Mazel Tough, Advantage’s #0 Rockett led his team with 33 points. Mazel
Tough’s #6 Noah a.k.a. “Leprochaun” just wasn’t enough this time to stop Advantage from bulldozing
them on the inside. Noah led his team with 22 points hitting 4 three-pointers from the perimeter.

Going into Sunday’s games the Venice Beach All- Stars will be playing against the White Collars
and the Mean Ones will be up against Team Advantage. The first tip-off will take place around 1pm.
Come join us this Sunday, August 28th, 2011 to see who will advance to the Final game next Saturday,
September 3rd, 2011 to claim the Venice Basketball League Championship title. DO NOT FORGET to bring
the kids for our LAST Sunday Funday with KVBL and The Natural Leaders Camp which starts at 9am with
breakfast and lunch provided.