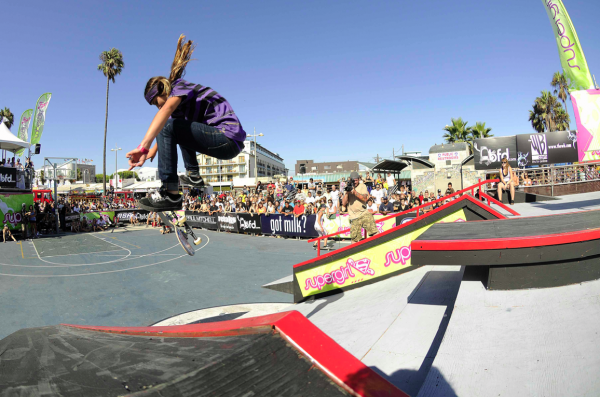 The girls have officially taken over our courts this Sunday and they will show us why they are the man. You do not want to miss this… and we will be playing right next door

The 4th annual Supergirl Jam is making its last stop in Venice Beach this weekend and they’re doing it in style. Among action sports’ top female skateboarders, snowboarders, and inline skaters will be the likes of Olympic gold medalist Nastia Liukin and Nitro Circus star Jolene Van Vugt.

Starting atop a mountain of 80,000 pounds of snow, snowboarding’s best female pros will display their most innovative tricks in the Supergirl Snowboard Rail Jam — sure to be the most amazing spectacle on the beach! Laurie Currier (Wrightwood, CA) has dominated the competition two years running, handily winning the overall top prize and the best trick contests in 2008 and 2009. This year, however, she’ll face the largest field of competitors to date as she seeks a third consecutive gold medal.