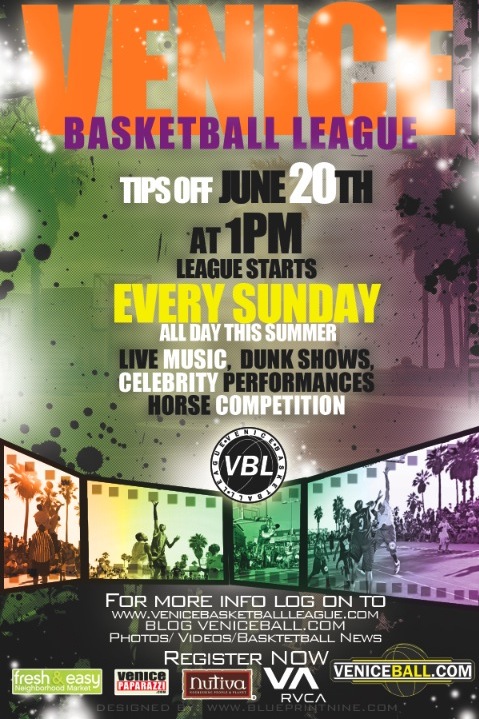 Team Advantage VS Venice All Stars

Team advantage is a new team in the VBL and is coming in for the #1 contender… Gil put a team of guys in their 30’s and 40’s who represent fundamental basketball at it’s best. Venice All Stars have been undefeated for 3 years in Venice and want to give them a nice and warm welcome.

The Mean Ones VS Sunblock

There has been a long tradition of over time games and rivalry between these two teams. This match up creates lots of controversy as one team is all good white guys and the other one is all black and mean.

Nick decided to split from Sunblock and create this new team that will showcase players from 7 different nations and The Free Agents are a mix of players that are all trying to make a name for themselves. This game should be interesting to see as it will be the first time all these players get together.

Kill The Hype VS Hollywood Hoops

One game which has had lot of people talking. K Money split up from Hollywood Hoops to create his own team Kill The Hype where he put some of Long Beach finest players and America’s favorite streetball players. Kieran says he has much respect for Hollywizzle but it was his time to create his own franchise and show everyone what his crew was made of. You guys already know about the show wizzle and his crew put out..

One game you don’t want to miss

PLAYERS, FANS AND COACHES SAVE THE DATES

VBL GAMES WILL BE PLAYED SUNDAYS

Thanks to ESPN we will be playing on a brand new court. Here is some inspiration for you